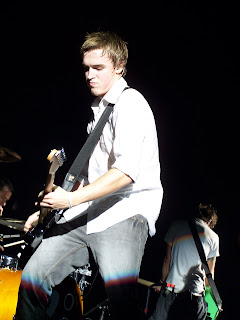 You know what it’s like at a McFly gig? Actually maybe you don’t so we’ll explain.
Those of you who want to be at the front will probably get there ridiculously early, sit around for hours on end in a queue with bitchy girls who are just as desperate to get to the front row as you.
Now, just imagine a McFly gig where you can be front row with a fantastic Vue – without all that hassle and stress. Perfect I hear you say? Well go to the cinema!
We are sat in the front row, singing along to both classic and contemporary McFly (is it ok to be described as classic already?!) We even hear one of the brand new songs called “Lies”. [Personally I hadn’t heard that one before, and felt like a Mcfailure when I found out that my fellow Flecker already knew it.]
Here is a prediction of what is bound to become a regular of any future McFly gigs. They played “The Last Song” as, wait for it, the last song. Well the last song before their colourful encore. Very clever.
We loved how the boys tried to make us McCinema goers feel included. Especially Harry’s shout out which included him saying “Can we see them?… No? Ok. Did we not think about that?” Something to think about next time then Hazza?
LB