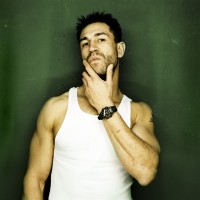 It’s been way too long since we’ve heard anything from The Bloodhound Gang – we had to find out what was going on. I had a chat with the outrageous Evil Jared Hasselhoff about his bits, his bowels and Bush.

Hello Evil Jared Hasselhoff! How are you?
Well, I’m in Germany, so I’m far enough from the debacle of the US electoral process to not be completely inundated by it, but still close enough to be able to enjoy Sarah Palin debate footage for the purposes of some serious sit-on-your-hand-‘til-it -falls-asleep wanking.

Are you really evil?
Not as such, I got the nickname in college, where there happened to be two Jareds in the same dormitory. One was a nice, personable fellow who got along well with everyone, the other would pee in your beer when you weren’t looking. I was the Jared with the bladder control issues.

We’re sure you get asked this all the time, but any relation to David Hasselhoff?
Several years ago our record sales in Germany were in the toilet and we figured if we can’t be popular, we could at least try to associate ourselves with someone that was popular, and who is more popular in Germany than Hasselhoff? Nobody since Hitler! So I claimed to be his illegitimate son and within eight months our record sales went from less than ten thousand to over a million and a half. Also, I once soiled my trousers on a plane taxiing on the Heathrow tarmac, just like the real Hoff.

You get your dick out a lot! Is there any particular reason for this?
When you suffer from a lack of musical talent, yet somehow find yourself on stage in front of thousands of people every night, you need to find alternate means of providing entertainment. Having fans distracted by laughing at the size and disfigurement of my genitals is, in my book, better than having them pay attention to the fact that we don’t have a clue re: the proper use of our instruments.

We’ve seen videos of you dragging things across the stage by it, do you have any other party tricks?
I’m practiced in the art of flatulatory marksmanship to the point where I can offend a target at 30 yards with an accuracy within 18 inches.

We don’t hear as much from you guys in the UK these days, what’s going on with The Bloodhound Gang at the moment?
I’m saving up my money to buy a set of silicone implants for Jimmy (our lead singer). I’ve given up on finding someone with breast augmentation more ridiculous than those things they stuck onto Victoria Beckham’s breast plate, so I’m committed to producing them myself.

Any plans to come over the UK soon?
I kind of think we’ve worn out our welcome there. At this point I think the only thing the British people would like to see flying into the UK less than us would be a V2 rocket.

We’ve read in a couple of places online that you have OCD and IBS, is this true?
As far as the IBS-attacks, I haven’t had a solid bowel movement since the mid 90s. At this point more liquid has passed through my lower intestine than through the leaves on Lake Pontchartrain.

How do you cope when you’re on tour?
Once I’ve desecrated my bunk, I make our guitar tech give me his pyjama pants, underwear and bunk and then have him sleep in the filth I’ve created.

You must have some amazing tour stories, any tame enough for you to share with us?
One time I took too much Zimavane and thought I had just gone to bed, but our bus driver found me in the janitor’s closet in a truck stop bathroom. Apparently I’d just had a shit in the urinal and was attempting to wash my hands in the janitor’s mop bucket.

Which band are the most fun to be on tour with?
Well I certainly wouldn’t want to tour with Girls Aloud, Atomic Kitten or Sugababes any more as I can’t deal with the constant sexual come-ons and always having to beat them back with a pointy stick smeared with doggy doo.

You were born in America, why did you decide to move to Berlin?
I’ve got 2 1/2 words for you: George W. Bush.

Does this not make it difficult as a band?
Quite the opposite. We all hate each other, so the more geography we have between us the better.

Is it true that you won’t move back to America while Bush is president?
I’ve dicked around with answering these questions for so long that by the time this interview goes out there will either be a black dude or a chick in one of America’s two highest offices.

Ever thought of getting in to politics?
I would love to, but I’m a terrible liar. I get all red in the face, giggle like a little school girl and begin to uncontrollably emit rancid tuna farts, although I heard that Churchill had the exact same problem, so maybe.

What did you want to be “when you grew up”?
A suppository in Geri Haliwell’s medicine cabinet.

Any plans to write new material soon?
Once we finish our box set of S Club 7 covers, we’re right back in the studio working on our own crap.

Any words of wisdom to finish the interview on?
I think it’s worthy to note the political progress that has been made in America. A mere two hundred years ago Obama could have been sold as a slave, Sarah Palin may well have been burned as a witch and John McCain was just breaking in his first set of wooden teeth.