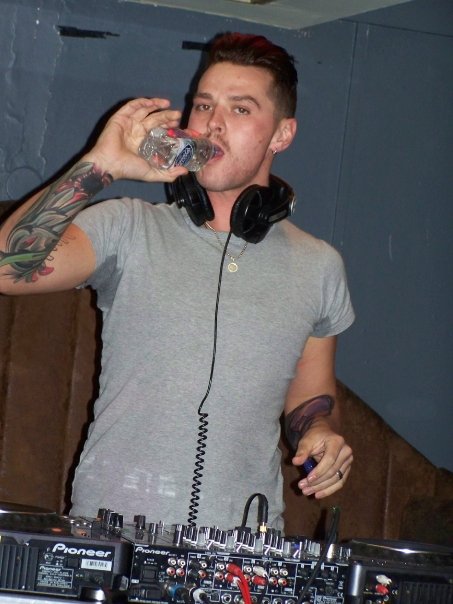 Imagine the most unlikely place for a DJ set – Sheffield University Union is definitely one of them.

When we walked in the weirdly shaped room not only was there no visible or logical place to have a DJ,  we couldn’t help but notice that we couldn’t move for football hooligans. This is because there was some important match (I won’t pretend to know or care who was playing) going on and the place was packed with people watching it on the big screens dotted around the room.

So we just sat there, amongst the football, in the middle of the room, sipping drinks and waiting.

Eventually something started happening next to us, something involving a large wooden table – this wasn’t looking promising at all. Had our names not been on the Post-it guestlist (no, really) we’d think we were in the wrong place.

An hour or so later and things started to look up. A man (who was blatantly picking his nose – sick) started to load the crappy old table with DJ equipment as the very important match hit half time, which meant time for another round of drinks, and by the time we got back to our seats the wooden table had been transformed – bogeyman had loaded it up with DJ equipment and despite having to climb over the sides to get in, we finally have ourselves a DJ booth.

And then DJ Matt Willis appeared, looking rather swish in a grey t-shirt and black jeans, and with his new tattoos on show. We weren’t too chuffed that he was pushing the same buttons as bogeyman but we tried not to think about it too much because one last (and rather enthusiastic) root up his nose and bogeyman was gone, all we had to do was wait for the foot ball to finish… but the football was nowhere near finished, so instead, they simply muted the sound and introduced Matt straight afterwards – now there’s a tough crowd to please.

Against the odds, DJ Willis was amazing! He’s come a long way since he started DJing – he was professional, he posed for photos with fans during his set – he probably spent 75% of the time bent over although few people seemed bothered by this, most people took photos. In a strange and non-perverted way it made us happy – the flash of underpants and ass crack reminded us that Matt from Busted was still in there somewhere!

He played a wide variety of songs during his set with everything from Blink-182 and Jimmy Eat World to Dizzee Rascal and Prodigy and despite the footie being turned off, he got a really good reaction from the crowd. Even the ones with flags painted on their faces.

Matt did promise us before he left that next time we went to see him it would hopefully be in a different setting – we really can’t wait to see him gigging again (and the less people picking their nose there the better, sorry we just can’t let that one go, we practically screamed in disgusted each time).

Not content with our fill of musical talent for the evening, the very nice lady who put us on the Post-it guest list also put us on the list for the gig afterwards. We were excruciatingly excited to learn that Cleopatra (of Coming At’cha fame) would be performing. Our excitement only heightening when weird school boy hats were forced upon our heads and we loved the school disco style music.

So what time did Cleopatra come on stage? Erm, only like 2am! By this time everyone was a bit too drunk and so the trio didn’t go down so well. People were actually throwing things at them at one point. Maybe it was something to do with their little lectures between songs about the recession and boys and so on.

We stuck around long enough to hear their theme tune and their cover of I Want You Back (1998 y’all). We’ll stick with DJ Willis thanks!