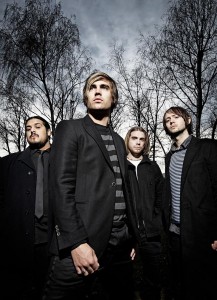 If you like Fightstar as much as we do, then you’ll love all of this. The boys are not only re-releasing their ‘Be Human’ album with extra tracks and a DVD, but they are also touring and then playing a one-off date in London! What more could you want?!

‘Be Human’ was originally released in April last year, but now the boys are re-releasing it as a deluxe limited edition with all new artwork. I’d be quick if I were you though, they are only selling 5,000 copies so make sure you get yours from 1st March!

The extra tracks on the CD are:

“A City On Fire” (the physical launch of the band’s recent single); “28k Resolution”, “It’s Blood Is Black”, “Mvua Nyeusi” and the cover of Jordin Sparks’ song, “Battlefield”.

If that wasn’t enough, you have a full DVD to watch that was filmed in December in Northampton. The songs featured are:

All of this lot, plus a load of videos and behind the scenes footage and interviews. Now I know what you’re thinking, Fightstar are spoiling you. If you can’t wait to watch the DVD, then you can catch them on tour now! They’ve already played Cardiff and Brighton, and tonight they play Wolverhampton. The dates are:

Plus their one-off date for MTV on Thursday 4th at London Dingwalls.

Get your tickets HERE. See you down the front!!