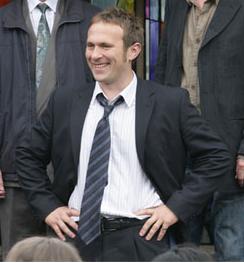 It’s about time we had some good news (we’re still not over Michael Bublé announcing his engagement – sob sob) and it’s come in the form of Jason Merrells of Cutting It and Waterloo Road fame joining the cast of Emmerdale.

Yeah OK, the downside to this is that you will have to actually watch Emmerdale, but on the plus side (and we never thought we’d say this) Emmerdale is on TV no less than six times a week – that’s six chances to see Jack Rimmer’s – erm I mean Jason Merrells’ – lovely face.

He will be playing a business tycoon called Declan who acquires a stake in the Home Farm estate when Natasha Wylde finds herself in need of investors. We’re so glad she killed her husband.

“I’m thrilled to be joining a show as respected and well-loved as Emmerdale and look forward to filming my first scenes later this month. Declan’s an enigmatic mogul who is bound to raise a few eyebrows in the village.” Jason said of his new role.