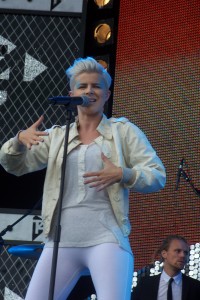 It’s been five years since the release of Robyn’s last album ‘Robyn’. Some would say too long, that’s exactly what she thinks too! Fans can expect to see an awful lot more of the pop star who has announced the release of her fifth, sixth and seventh albums this all year!!

Yes, we feel your joy!

It seems the Swedish singer has been busy since her last album in 2005 and has decided to release it all…..this year!!

“I got all these great songs, so why not?” she said. “It’s been five years since ‘Robyn’ and I didn’t want to wait with a release until they are all recorded, so I decided to start putting them out right away. I also can’t wait to play live again and this enables me to tour and record at the same time. I just want to keep making music.”

We’ve been promised the first instalment ‘Body Talk 1’ and single ‘Dancing On My Own’ on June 7th with the rest of project ‘Body Talk’ to follow before Christmas.