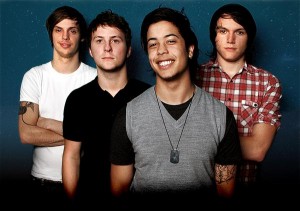 Flecking favourites Out Of Sight have announced that they have been signed to Slam Dunk Records.

As part of the celebration the band will be releasing their debut album ‘Where Do We Go From Here?’ on July 5th, which will be available to pre-order shortly through Slam Dunk Records.

If this wasn’t enough, the band are also offering a free download, as a taster of things to come from the album, with track ‘No Time Like The Present’, which you can download for free by signing up to a mailing list here.

‘The only way is up’ for the band and with the Slam Dunk dates approaching, a debut album and more tours being announced, we can’t wait to see what the future holds for them!

You can keep up to date with the bands latest news through their MySpace.

If you haven’t already seen the interview from when we caught up with the band, when they supported Boys Like Girls, you can see it here.