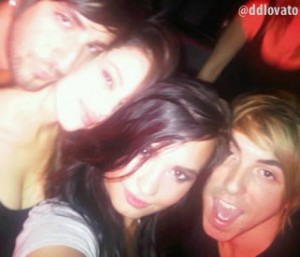 Demi Lovato partied with All Time Low at a Cobra Starship gig and was spotted getting a close to Alex Gaskarth!

However, it was after the gig fan videos emerged of what appears to be Demi and Alex getting close, dancing and hugging during the gig.

A fan caught Demi and Alex on video and sent it to Celebuzz.com. The fan also claims to have seen Demi and Alex “grinding on each other,” – however she didn’t catch that on tape.

If we’d just been dumped, we’d want to get over it with All Time Low too.