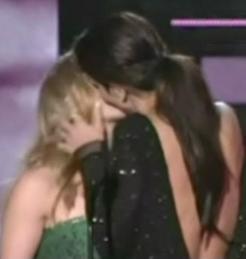 Sandra Bullock and Scarlett Johansson shocked the audience by locking lips at the MTV Movie Awards.

Sandra was on stage accepting the Generation Award, when she asked Scarlett what she was doing on stage.

Scarlett replied that she was standing in for Ryan Reynolds – who was nominated for the Best Kiss award with Sandra.

One thing led to another, and the pair kissed.