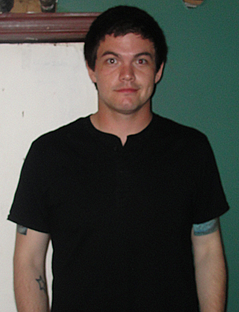 A bright sunny day in Toronto Canada, and what better way to spend our time than by going to see The Spill Canvas on their headline tour at The Opera House. The band originally began with lead singer Nick Thomas who set out to entice the world as a solo project, which then evolved into a band. But being a musician isn’t always as easy as it seems. We caught up with Nick to discuss if he ever gets tired of being in the band, his battle with drug addiction, and what the future holds for The Spill Canvas.

Introduce yourself!
My name is Nick Thomas, and I play guitar and I sing in The Spill Canvas.

How is the tour going so far?
Well, we only really have three or four days left, but it’s been really good. We had to do some make up shows in the States, because we were on a headlining run just a couple of months ago, and some of the shows we had missed, so we had to make it up. And then Canada was the last leg of the tour.

Can’t forget Canada! So, The Spill Canvas have been going for a long time now, how do you keep inspired to keep going? Do you ever get tired of being in a band?
I know, I mean I feel like I’m still 16, and I’m 26! It’s like I’m still a kid for sure, I don’t ever want to grow up at all. Oh my God yes, I do feel like that sometimes. We hadn’t been on tour, prior to our last headline run, for almost two years and we took that time off to write for the new record. It was very, very taxing, I had writers block and I had developed a serious drug addiction which I then went to rehab for. It was a very heavy moment in our band. We were all so light hearted for the whole thing, and then it became an issue and it was pretty tough because we were like ‘What do we do? Do we keep going or do we not?’. So, now we’re just taking it slowly, and each day that comes we definitely get closer and better to figuring out where we wanna go.

How are you coping now with the drug issue now?
Oh, I’m really good. I mean it’s just insane how it sneaks up on you and you just don’t realise it until you’re like ‘I don’t remember the last three months’. I mean I’m already absent minded let alone whilst popping pills all day [laughter]. It’s very enlightening. I mean I had written songs about addiction, but I wasn’t addicted at the time and it was just a topic to write about. And now, I go back and listen to them and I’m just like ‘Oh my gosh, I really hit the nail on the head!’. It’s amazing, being on the road is a recovery tool I guess, it allows me to start clean every day.

Good for you! It has been argued that you are one of the best bands around lyrically, what inspires your lyrics?
Thank you so much. Well, there are certain songs that I wrote a long time ago, older songs that were stories. Like, there’s a song called “The Tide” which is a big story, and another song called “Self Conclusion” which is also a story. They didn’t happen to me in real life, but I was always a short-story kind of writer and I relate my life to the songs through some of the characters. If I didn’t do music, I’d be really into writing and literature. But as far as the other songs go, they are very personal, I mean you get to a point where you can listen to it and be like ‘Oh, that’s this guys whole life’ [laughs]. But the universal aspect is what I shoot for, whether I make it happen or not is a different story.

We think you definitely do! Do you have any crazy fan stories to share with us?
Oh gosh, well there’s this one girl, she’s a sweetheart, I mean she’s amazing and she’s been there since day one. But at first, I’m not gonna lie it was a little scary, but she got this tattoo of me playing guitar on her hip, and you know it is there forever. It took me quite a while to get used to it, but I mean we all kinda know her now, and the support that she, as well as others, have shown is like the life blood of our machine. I mean, we wouldn’t operate if we didn’t have that.

Wow, that is pretty crazy. If you could host your own festival, who would headline and who would support?
That’s a tough one. I grew up on Van Morrisson, Fleetwood Mac, kinda older, folky music. But for right now, I think I would probably have Eminem and, I think it’s pronounced Bon-Eevar, but Bon Iver because I am just a huge fan of his. Wow, they’re two completely different styles [laughs]. We did a couple of weird shows like that actually, where we played a show in between Flo Rida and Wyclef Jean. Everyone was probably like ‘What? Who is this?’ [laughs]. But Eminem and Bon Iver, that would be so sweet, I would fan out so hard!

Who is the most embarrassing band or artist you have on your iPod?
Besides myself? [laughs]. It’s weird because I do have guilty pleasures and stuff, but I’m just not guilty about it [laughs]. I’m just like ‘Yeah, I know, I know… I understand’. I dunno, erm maybe Maroon 5? But they’re really good though!

Who has been you’re favourite band or artist to tour with?
Can I say two? Top two. A long time ago when we started touring, we played with a band called As Tall As Lions, and they’re still playing now and stuff, but when we first came about we did so many tours with them, and they were like DIY tours. I was so in awe of their musicianship, as soon as I heard them I was like ‘Oh my gosh. And then more recently, the last tour we did before we took a break, we did a run with One Republic. And I had just heard the single “Apologize” and I thought they were just great, and they were doing very well at the time, well they still are, but I mean they had just gotten so big. And the performances that they gave were amazing. It was good to get along with them and hang out, and then to see them perform live too. Sometimes you don’t really get along with bands, so you have to go and play the show and that’s it, but for the most part we are easy to get along with, we try to befriend every band we meet, but those two definitely stand out.

Is there anyone you would like to collaborate with?
Eminem! [laughs]
[Before the interview, Nick was telling us how obsessed he is with Eminem and his new album “Recovery”.]
I wanna be a rapper so bad. I was going through one of those dark moments in my life, and that’s when I decided I wanted to be a rapper. Basically, the reason I got into Eminem is because he has been through the exact same issues that I have. Like all of the songs he does, I listen to them and I’m like ‘Yeah!’, so yeah, that’s when I decided that I wanna be a rapper, someday. I did actually record one song, but it’s not very good. So yeah, him or Justin Vernon from Bon Iver, I‘d love to write with some amazing writers like that.

What is next for The Spill Canvas? Any plans to visit the UK?
Ah man, I wish. Right now, it’s just kind of an empty limbo stage. We’ve had the two EP’s released which both launch up to the full album “Formalities”, which is still not ready, or even close to being done yet. We had “Abnormalities” which had three songs on it and was released in January and then in April our newest EP called “Realities” had five songs on it, including the new single “Our Song”. So yeah, the album’s not ready just yet, but after this tour in about three weeks or so, we start a tour with Goo Goo Dolls and Switchfoot. I’m not even sure where exactly we are playing, because it’s still not real to me that this tour is happening. I don’t feel quite worthy of the spot, but I’m pretty sure we are coming back to Toronto.

Sex drugs or rock ‘n’ roll?
All of them, at the same time.

Who do you think will win the Fifa World Cup?
Japan! No, I don’t know anything about Soccer. Hold on, wait a second… [after some advice from fellow band mates] yeah, I’ll just say Brazil.

Thanks Nick! Maybe see you again in the near future with Goo Goo Dolls!

At the time of the interview Brazil were still in the World Cup.

Check out The Spill Canvas’ hilarious cover of Ke$ha’s “Tik Tok” below.