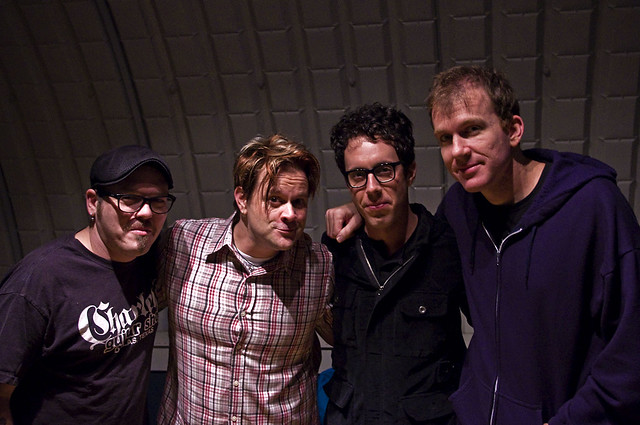 I’ve said it before and I’ll say it again, Bowling For Soup are my absolute favourite band to see live, so naturally when they gig over here we’re all over it at Flecking Records. But just because you’re getting half the band this time, don’t expect half the show. Not only are Jaret Reddick and Erik Chandler performing BFS tracks acoustically, they are also showcasing their side projects – that’s two sets per night. We have “Erik Chandler and the Mulberry Street Socialites” (who have an absolutely cracking track called “Honestly”, which you can click here to listen to) and “People On Vacation” which is Jaret’s band with Smile Smile’s Ryan Hamilton. Linus of Hollywood also played a set, but with everyone getting involved in more than one way, and the fact that there was literally no time to wait at all between sets, it felt like one long show by a group of close friends, and that was very much the vibe I picked up on backstage too. It was a very windy day in Leeds so naturally when I sat down to chat to Jaret we did the very English thing of chewing over the weather first of all, but then it was down to business.

So you guys have been here a week now.
Yeah, we got here last Friday. We did the first four shows in England, then headed to Scotland and Ireland yesterday so we’ll finish up the tour in England. It’s going really good.

And you don’t have any days off on this tour, do you?
Yeah, we don’t really take days off. Days off are kind of an inconvenience when we’re outside of our own country, and to be honest kind of expensive because we still have to pay for the bus and the crew and stuff – and it’s another day away from home, so it’s easier for us to just hit it as hard as we can and get it all done.

You guys are working hard, you’re doing two sets each!
Yeah, basically what happens is Erik comes out and does his solo stuff, and he’s accompanied by Linus of Hollywood and then Ryan and I – in our band People On Vacation – we come out and do a set and then Linus comes out and plays a few songs with us on piano as well as his set, Linus of Hollywood, and Erik goes out and plays the harmonica with him and I go out and do a song and then Erik and I play the Bowling For Soup stuff.

Wow! Obviously the gigs are a bit more laid back, but do you guys still party as hard? Are you big party animals?
We are big party animals I guess. I mean, we’re not really always out and going crazy, we tend to make a party wherever we are.

Is there a downside to being on tour?
The downside is being away from home, we all have families and pets and neighbours and friends. When you get into a busy time, which is what we’re kind of just starting right now – we’re going to be super busy until November – it gets a little hard to be gone all the time. We try to break it up as much as we can as we’ve got a little older. We take a week or two off here and there.

You’re 11th studio album, “Fishin’ For Woos”, is out later this month. We’ve had a listen to it, it’s really good!
Thank you.
Would you say parting ways with your record label has had any effect on your music?
No, I don’t think it’s any different than it would have been, regardless. When I went in to write these songs, and to record them, we didn’t really know that we were going to end up putting it out ourselves. There was talk about going straight on to another label. The main thing we knew was that the “Sorry For Partyin’” album was going to be shelved and that we wouldn’t be able to tour on it and that there wouldn’t be any singles promoted from it. We just decided to just be proactive and ready with new material as soon as we figured it out.
It’s a shame, because that album was one of my favourites.
I know, and it’s a real big shame for us because we worked for a long time on it. We took our time and worked with the people that we wanted to work with and I just feel like it came out perfect, so it is a shame but at the same time, for a Bowling For Soup fan, they’re getting another album a lot quicker than they would have ordinarily. I think it’s a really good album.

Which are your favourite tracks on the new album?
My favourite tracks are probably” Smiley Face”, “All Good”, I really like a song called “Turbulence” that’s on there. I like the last song a lot, which is called “Graduation Trip”. They’re all great.

I have a couple of other, much tamer, words to see if you know what they mean.
Ok.
Bird.
Bird is a girl.
Correct. Barmy.
Barmy? I don’t know what barmy is.
It means crazy.
Crazy, got it.
Do you know what chin wag means?
Chin wag? [thinking for a while] No.
It means chat. And the final one, cock up.
Cock up. That’s not a cock push-up, is it? It sounds like a boner, what is it?
It’s a mistake.
Oh yeah, a cock up. We call it a fuck up.

Click here for more info on BFS’ tour later this year, and don’t forget to buy Fishin’ For Woos on April 26.