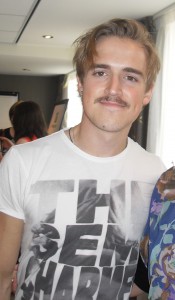 It won’t come as a huge surprise to most Pioneers but still it’s quite possibly the most exciting news of the day! Tom Fletcher and Tom Felton will apparently be working together.

Tom Felton, who is better known as bad guy Draco Malfoy in the Harry Potter series, is going to be working with McFly singer Tom Fletcher as he pursues his career in music.

According to The Sun, the friends are going to get together for a few writing and jamming sessions which they are hoping will lead to a collaboration on the long awaited debut album by Felton.

A source said: “Tom sounded out McFly’s Tom to discuss the industry and the musical direction he wants to take.
“He’s a huge fan of the boys and wanted to work on a few songs.
“There is a big chance the pair could soon go into the studio together.”

Tom Felton already has a recording deal with an independent record label. He has previously joked about becoming a rapper and getting into the UK grime scene – we can see it! Honest!

In other Tom Fletcher news the singer has Tweeted today that “…it might be time to say goodbye to the tash…I’m in london atm but will contemplate the fate of the tash on the journey home.”

It seems that Fans weren’t digging Tom’s ‘tache in our recent poll with a staggering 75% voting for the singer to shave it off!