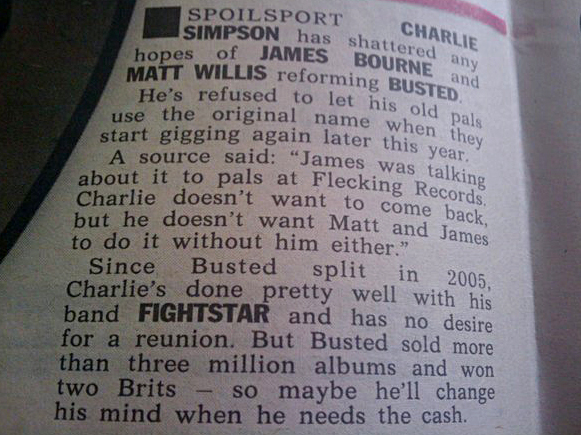 We try to stay strong, we really do, but we’re still not fully over the disbanding of Busted.

So you can imagine the whirlwind of emotions stirred up today when we looked over the UK trending topics on Twitter – #BUSTEDWEREMYLIFE is the top trend at time of writing.

As teens, we absolutely adored Busted, but then it all came crashing down when Charlie Simpson decided to part ways with Matt Willis and James Bourne – why Charlie, why?

Arguably the band that bridged the gap between mainstream music and bands with instruments for our generation, Busted have massive chart success, awards and sell-out arena tours firmly under their belts.

Are they likely to get back together? That’s what we all want to know. Well let’s look at the evidence…

While Matt and James have both tweeted about the possibility of them working together again someday, in an interview with Flecking Records last year, James made it pretty clear that Charlie was preventing any kind of reunion – with or without him.

“Matt actually asked Charlie if he would mind us using the name Busted without him,” James told us.

“He said no. We invited him back, knowing he wouldn’t be into it. He doesn’t want to come back, but he doesn’t want me and Matt to do it without him either.”

Celebrate a truly great band with us by grabbing your favourite Busted CD and cranking up the volume.