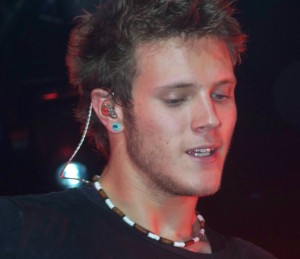 If we said to you Snog, Marry, Avoid and Dougie Poynter, we doubt very many of you would chose to avoid the McFly bassist, but that’s exactly what his ex Frankie Sandford apparently did recently…. for FIVE HOURS.

According to the Mirror, Frankie and the rest of The Saturdays hid out in a sweaty footballers’ changing room for FIVE hours just to avoid ‘The Awkward Moment When You Bump Into Your Ex’ happening.

The Saturdays, were playing alongside McFly at the Towneley Live festival in Burnley this weekend.

A lot of effort when into ensuring the pair didn’t bump into each other and the girls chose to hide out in the Burnley FC changing rooms making sure that McFly had left the building before showing up at the festival site.

The source told the newspaper: “Organisers arranged transport for the girls so they would arrive at the festival site once McFly had left – to make sure the pair didn’t have to bump into each other….They both made it clear that they respect each other’s privacy, so it was more to make sure there wasn’t any unnecessary awkwardness.

“Fortunately, McFly were first on the bill at 3pm, so the girls were able to stay out of the way until their stage slot later in the afternoon.

“They didn’t get to Towneley Park until McFly had headed off to another gig in Doncaster.”

The old flames also managed to avoid each other at Alton Towers in June when both bands were playing a show.

Probably for the best as Frankie brought along her new boyfriend, Manchester City footballer Wayne Bridge. We’re sure he loved the weekend’s dressing room banter with the girl group!