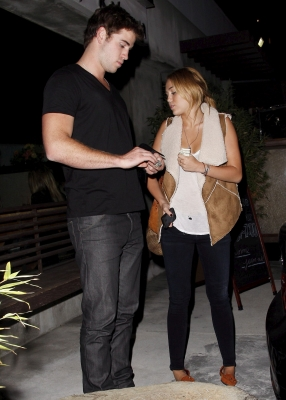 A report has claimed that Miley Cyrus and Liam Hemsworth’s relationship is “better than ever!”

According to Hollywoodlife.com, a friend of Miley’s reassured them the couple are still going strong.

“Miley and Liam are used to having to deal with tour schedules and long distance filming. Whether she’s on tour, or he’s shooting a movie, they obviously love each other very much and make things work,” the insider told HollywoodLife.com.
“They both understand it’s part of their careers and they get it.”

And Liam isn’t worried about Miley getting close with her So Undercover co-star, Joshua Bowman, either.

“Liam isn’t worried about Miley or anyone she’s working with. He’s really confident, and I think she finds that sexy,” the source said. “They talk all the time and have a great relationship. I don’t see jealousy from either of them. They’re stronger than ever.”

The pal added, “Miley isn’t going to ruin the relationship with Liam by hooking up with one of her co-stars and she’s very trusting Liam will do the same. Liam’s a cool guy; he’s not going to ruin a good thing.”

Just in case you still had doubts, Miley and Liam were snapped having dinner at Kiwami by Katsuya in Studio City.

Check out Miley’s gorgeous Sanctuary Sherpa Vest in Cognac from their Fall 2011 collection. US readers can pick one up for $130 from PiperLime.com and select Bloomingdale’s stores.