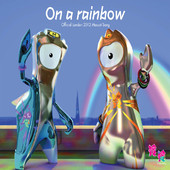 The track, called On a Rainbow, was recorded by The Fletchers and the West Leigh Junior School Choir.

“Just found out that the song me and my sister did for the London 2012 Mascots is out on iTunes!” Tom tweeted, adding “No one told us, HA!”

Carrie, who is 18, also tweeted the great news.

“I think everyone should go to their itunes store….and type in Official London 2012 Mascot song…and you’ll find out why i’m so excited!!!” she said.

You can download the song from iTunes for 99p, Amazon for 89p or completely free via Mflow!