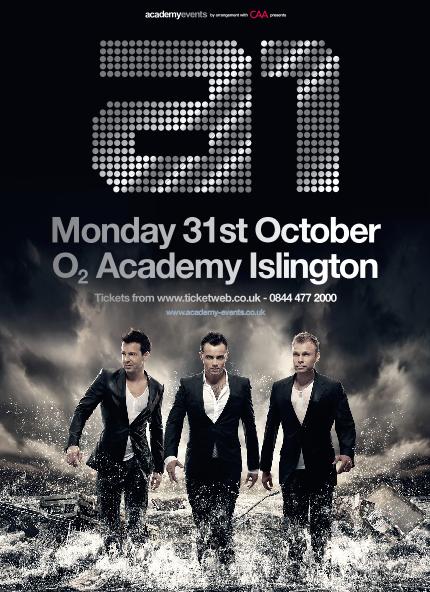 Pop band a1 will hold a special one off performance at the o2 Academy Islington in! London on the 31st of October. This exclusive show will be their very first live performance in the UK for nearly a decade, after countless request from their many dedicated British fans.

The band remarked “After two amazing years abroad, finally we can bring a1 back to the UK and show our British fans what they’ve been missing.”

In 2009, Ben Adams, Christian Ingebrigtsen and Mark Read re1united as a1 to perform for a huge TV show in Norway. After record breaking viewing figures and great demand from the Norwegian public, they went on to perform over 50 sell out concerts. Having signed with Universal, their self penned new album, Waiting For Daylight, hit the number one spot and became one of the year’s best sellers.

After 2 rollercoaster years in Norway, a1 are absolutely thrilled to be back home performing in the UK. Their return to the UK will kick off with this special concert at the o2 Academy Islington where a1 and their band will perform their old hits, as well as giving fans a sneak preview of some of the anthemic songs from their new album.

a1 made their breakthrough in 1999 and quickly rose to fame in the UK, Europe and Asia with number one UK and International smash hit singles such as Take On Me (the A-ha classic), Same Old Brand New You, Caught In The Middle, Everytime and Like A Rose.

The band went on to record three studio albums which were released by Sony Music worldwide. They have sold more than 3 million records internationally and in 2001 won a Brit award for Best Breakthrough Act.

The show is promoted by Academy events by arrangement with CAA and tickets for the show are selling fast with VIP tickets already sold out.