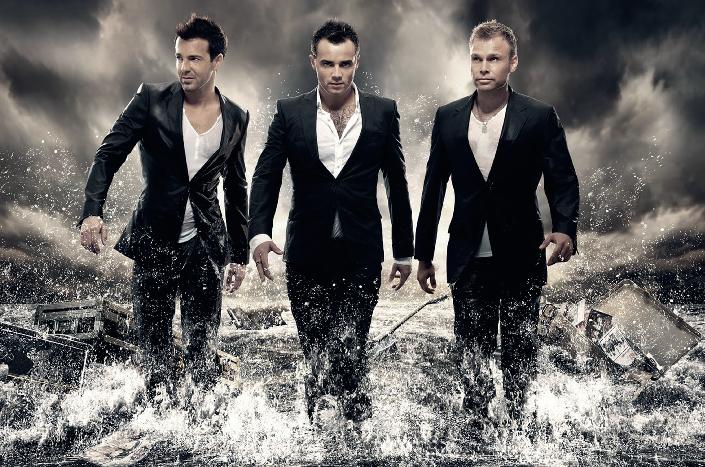 When we found out that a1 had reunited and were kicking off their UK comeback with a gig in London, it was probably the best news we’d heard all year.

For those of you who haven’t heard of a1 (for shame!), they were a huge boyband who burst into the UK top 10 with their first single back in 1999 and enjoyed huge success until band member Paul Marazzi left in 2002 and they decided to call it a day.

Well now Ben Adams, Mark Read and Christian Ingebrigtsen are back, armed with new music and looking hotter than ever.

We caught up with Ben and Mark ahead of their London show later this month.

Hey guys! You’re a member short of the good old days – what happened to Paul?
Ben: Paul left the group quite a while before we finished up as a group first time around, he left in 2002. It didn’t seem natural to bring him back, in our minds we were a three-piece, and that’s how we’ve continued.

What is he doing now? Are you guys still friends?
Mark: We don’t have too much contact with Paul, we believe he moved to another part of the country and as far as we know he’s not involved in the music business so much now. There was no bad feelings and obviously we wish him all the best in whatever he chooses to do.

You’re armed with new music, how does it differ to the old stuff?
Ben: Obviously we’re ten years older, so we’ve got ten more years experience in life and relationships. It’s a move-on from where we were before, and now we get total freedom to do what we want, write what we want to write about and what style of songs we want to sing. It’s quite… er… what do you reckon Mark?
Mark: [laughing] I think one of the last songs people remember us for, ‘Caught In The Middle’, is actually a really good bridge to where we are now musically. We had our first stuff, the fun slightly cheesier pop and then we branched into ‘Caught In The Middle’ band-style and we’ve taken it a step further from that. The reactions we’ve been getting from the new material are actually some of the best reactions we’ve ever had to any of our music.

What’s your favourite old a1 track, and you favourite new a1 track?
Mark: Good question! My favourite old a1 track is…
Ben: [interrupting] Mark is going to say ‘Like A Rose’.
Mark: No, I won’t say ‘Like A Rose’, I will say…
Ben: ‘Like A Rose’?
Mark: No! I’ll say ‘Same Old Brand New You’. I just loved everything about that song, I just thought it was a time when that kind of pop was just so popular – you know, with the Backstreet Boys and *NSync – and I feel with that song, that was one of our best pop tunes, and that was the first number one that we wrote. My favourite song from the new stuff, wow that’s a tough one. We have a really cool song called ‘The Life That Could Have Been’, which is a really nice tune, worth checking out.
Ben: My favourite was…
Mark: [interrupting] ‘Like A Rose’.
Ben: [laughing] Well that was a very good song, but I have to say ‘Caught In The Middle’. It’s one of those songs that I just think stands the test of time. From the new stuff, probably ‘Don’t Want To Lose You Again’, which was probably our biggest single over in Scandinavia, and it will probably be our next single over here soon.

Do you still perform the old material?
Mark: Yes, if people come and see our live shows now we really like to mix it up, so we do some of the old songs – half and half really. It seems to work really well.
Ben: I think in the UK we’ll probably do a lot of the old stuff because people don’t know the new stuff quite as well as they do in Scandinavia.
Mark: We’ve adapted them a little bit, slightly different versions that suit having a band.
Ben: Mainly reggae.
Mark: Reggae versions – not really.

In all your years together, what’s the craziest thing to happen to you guys on the road?
Ben: I think probably going through the Notting Hill Carnival [to Mark] do you remember that?
Mark: Noting Hill Carnival, not London Pride?
Ben: Remember when the car was suddenly surrounded by people, rocking the car from side to side. That was quite scary. We’ve had some crazy stuff happen in Asia – 25,000 people turning up to signings when they were only expecting 1,000 and stuff like that. There are so many memories , it’s hard to pick one.
Mark: It was nice being back in Norway last year and headlining a show with 50,000-80,000 people there. To still be doing shows like that ten years on is very cool.

What can we expect from your forthcoming London show?
Mark: Is that the one at the O2 Academy?
Ben: I think it is.
Mark: In Islington.
Ben: It’s not in Islington?
Mark: Yes it is.
Ben: The O2 Academy in Islington?
Mark: The O2, they have their very own academy.
Ben: Really? And where is that?
Mark: The O2 Academy in Islington.
Ben: Oh wow! – what was the question?
[laughter]
What can we expect from your forthcoming London show?
Mark: Music!
Ben: Lights!
Mark: Drinks – if you go to the bar.
Ben: A drum kit.
Mark: Peanuts.
Ben: It depends what you buy. But no, it’s going to be great! We’re going to be doing all the hits that everybody knows and it’s Halloween so there might be something special.
Mark: Yeah, we might do something special for that occasion.
Ben: We’ve got an amazing piece of intro music that me and Mark put together. It’s hilarious.
Mark: Don’t spoil it! The key in entertaining people and we like to inject an element of fun into it, and just have fun on stage. That’s one of the big differences between us now and then, we’re much more loose and free as a band, we just like to have fun on stage and I think the audience see that we’re having a good time and enjoy it as well.

We’ll bet you’re still a big hit with the chicks – who gets the most female attention?
Ben: [joking] It’s always been me, hasn’t it?
Mark: No, he likes to think that.
[A worried Ben makes it clear to the dictaphone that he was being sarcastic]
Mark: No, that’s how it’s gonna go, you said “It’s always been me” and you meant it, and you meant it sincerely because you’re such a humble chap.
Ben: This voice is actually Marks!
[laughter]
Mark: You know what, I don’t know if we really notice nowerdays. The amazing thing is, over in Norway – we don’t know if it’s going to be the same over here – but over in Scandinavia our audience has grown so much we actually get people of all ages coming to see us, which is quite a surprise. People as young as ten, right up to 60, so all ages.
Ben: Also, there’s a lot of guys. You’d think at a boyband show it would just be girls but obviously we’ve been able to broaden our horizons and we do a lot of concerts where it’s mainly guys.
Mark: Yeah, they’re a bit scary. We did a couple of gigs in Norway where it really was a kind of drunken, hillbilly kind of crowd. We did fear for our lives, fear for our safety! But it was fun!

So who gets the most male attention?
Mark: It’s got to be Ben, it’s always been Ben.
[laughter]
Ben: Well Christian…
Mark: No no no, it’s got to be you because you were on the front cover of Attitude Magazine wearing nothing but a white sheet.
Ben: I wasn’t wearing the white sheet, the white sheet was wearing me.
Mark: I don’t know about that, ergh. I think we saw more than enough.
Ben: Not one of my favourite moments.
Mark: Ok, so you can have that one too.

Get ready for a cheesy pun… are you the same old a1, or a brand new a1?
Ben: We’re the same old brand new a1! There are elements that are the same and there’s also fresh new parts that aren’t the same.
Mark: Little did we know when we wrote that song that ten years on we would still be answering questions with puns like that. It was genius!
Ben: And actually, [to the dictaphone] you can’t see out reaction but we can probably recreate the laughter that was inside.
[Ben and Mark laugh manically]

After the London show, what is next for a1?
Mark: We are planning to come back to the UK, first we’ve got to do a quick trip to Asia which is going to be very exciting, first time back there in many years, and then we’re popping back to Norway because we’ve got a Christmas single coming out there which is going to be great. We’ve been writing a lot of new songs so we will be repackaging our new album and releasing it in the UK, but for right now we’re focusing on the gig on the 31st of October so don’t miss it!

To find out more about the same old brand new a1 and for info on how to get tickets for their gig at the O2 Academy in Islington, check out www.a1official.com.