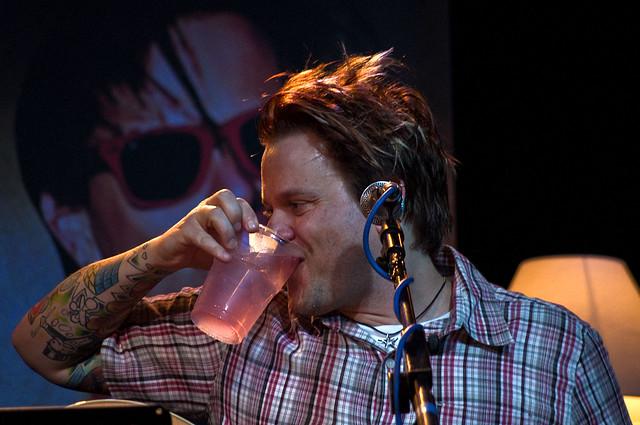 Bowling For Soup – the band who, by our reckoning, never sleeps.

The Texan pop punks have a new three-track single out and they’re heading over to the UK for a full band tour this month. I caught up with Flecking’s favourite front-man, Jaret Reddick, to chat about all things BFS.

Hey Jaret, how are you?
I am good, thanks.

I was just wondering, do you guys ever take any time off?
Tough question! BFS take time off every now and then, but we all stay busy, so I don’t think it seems like it.

You’re heading back to the UK in a few days for a full band tour, excited?
I am! Always a good time!

What can we expect from this tour?
We will have a bar on stage and we are playing every single we have ever released – I just don’t see how that isn’t the best teaser EVER!

Who is the biggest party animal in BFS?
We are all different and insane in our own ways. Erik drinks the most, but tends to pass out early. Gary paces himself, but can stay up all night long. Chris and I tend to be the ones who do really fucked up shit – but we are old… so we have to be a little careful.

Who gets the most female attention?
Well, that’s silly – ME! [laughs]

Who gets the most male attention?
Definitely Chris. Dudes love him!

Who spends the longest getting ready to go on stage?
I guess me… but only because I change my shirt before and after a show.

Who feels most at home in the UK?
Chris. He pretty much used to live there, he has it down!

Are you working on any new music at the moment?
Our new single just came out. It is a song from “Fishin’ For Woos” called “I’ve Never Done Anything Like This” featuring Kay Hanley on vocals. The fun stuff is the additional tracks! We redid “The Bitch Song” and finally released a cover of “Stacy’s Mom” – seeing as how everyone thought we did it anyway. We also have a new Christmas album out soon!

Are you still working on your side project, People On Vacation?
Yep. Our first EP comes out November 26th. I am very excited!

Would you ever bring a People On Vacation tour to the UK, without BFS?
Yes! We are talking about doing that next year!

Do you think BFS will ever call it a day?
Not in the sense of “breaking up” but I think we will eventually slow down.

If you weren’t in a band, what do you think you’d be doing for a living?
I’d probably be a counsellor of some sort. That was my original intention.

What do you guys have planned for 2012?
I will spend some time doing POV, and I am working on a solo record of kids songs. Erik has a solo album coming out as well. BFS will take it easy until spring and then fire up again in the summer!