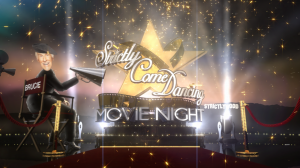 Tonight it was the turn of footballer Robbie Savage to step out on the Strictly Come Dancing dance floor for the last time as he quicksteped his way out of the hit BBC show.

It was popcorn and sequins at the ready last night as Strictly hit Hollywood for a host of silver screen sensations!

With just six couples left they all put in Oscar-worthy performances for a place in next week’s Semi Final.

Last night’s show saw our top six couples take to the ballroom floor to perform a selection of glittering ballroom and Latin routines to classic Hollywood tunes, hoping to win over the public and impress the judges.

On tonight’s result show, it was revealed that the bottom two couples were Robbie Savage & Ola Jordan and Jason Donovan & Kristina Rihanoff. It was then revealed that Robbie & Ola were then next couple to leave the competition.

When asked about his Strictly experience, Robbie said: “It’s just been everything you know. People didn’t know who I was before I came to this show, I wasn’t a nice person on the football pitch and hopefully I’ve changed people’s perceptions of me. I am just a normal, decent guy.”

Robbie added: “And Ola has been unbelievable.”

Next week’s Semi-Final will be broadcast on Saturday 10th December 2011 at 6.30pm with the results show on Sunday 11th December at 6.55pm on BBC One and BBC One HD.