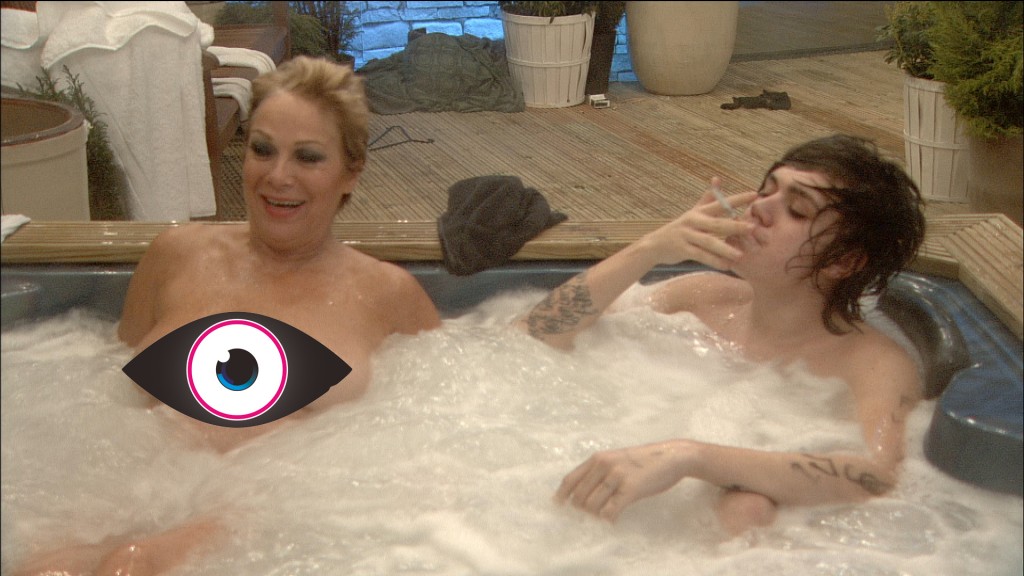 Day 13 in the Celebrity Big Brother House – and a happy 19th birthday to Frankie Cocozza!

9:22am
Yesterday housemates started a 2 day task for the chance to win a luxury shopping budget. Today the task continues, and with it being Frankie’s 19th birthday, Big Brother has a birthday themed task in mind.

Housemates are woken by a song to remind housemates that it’s Frankie’s birthday. Natalie notices an envelope marked to Frankie fall from the ceiling. Frankie opens the envelope to find a birthday card which has a recording from Big Brother inside. Big Brother explains that he has 60 seconds in which to get into the Diary Room.

After making his way through the diary room corridor that has been filled with balloons, Frankie is wished a happy birthday by Big Brother. He changes into a candle costume provided and is then told that in the garden is a birthday cake and he has 60 seconds to get in it. Frankie runs through the house, into the garden and jumps atop the giant cake, where Kirk stands by to aid him. The housemates are shocked to find that the cake is actually real.

1.24pm
Back in the house, Big Brother announces that Denise has 60 seconds to get into a dog costume, and then a further 60 seconds to act as much like a dog as possible. Denise crawls into a basket and Michael pats Denise as he feeds her water out of a dog bowl.

2:25pm
Denise and Michael are enjoying a little down time by the hot tub, whilst discussing Frankie and Kirk’s playful nature. Denise says that having them in the house has helped her not miss her kids as much “they are both so affectionate” she says.

Kirk and Frankie are on the garden sofa’s talking about Michael and Denise. Kirk says “they need to just have sex and get it over with” Nicola responds “She is married!” Kirk jovially impersonates what Michael may be like in bed putting on a husky voice saying ‘harder, harder’.

Michael and Denise have now moved on to the subject of their past arguments. Michael makes Denise laugh by mimicking the faces he’s pulled when things have got awkward between them. He also tries to reassure her by saying often when she would come into a room and he would leave, he had already been thinking of leaving before she had come in, despite how it may have looked. They talk about the insecurities and paranoia that manifest whilst being in the house, Michael says “sometimes you walk in and suddenly the whole room is silent”.

Kirk has been tasked with getting in a boat with all the people he nominated for eviction, within 60 seconds. He grabs Georgia, and the rest of the housemates help to wake the twins who have been napping in the bedroom. Once in the boat, conversation turns to nominations. After discussing why he nominated them all, Kirk asks the twins why they nominated him. They respond by saying “you were being mean to Georgia”.

Nicola walks in and asks what’s going on. Kirk, who is getting noticeably agitated says “This is the fun boat…. the girls nominated me because of something Georgia said, which is f*****g ridiculous. Georgia is trying to defend herself, but is being cut in by Kirk.

Karissa responds by saying “I honestly think you nominated us because Kristina and I don’t flirt with you guys”. Kirk is taken aback by the comment and says “personally, nothing against you, but you’re not my type”. Kirk defends himself by explaining that he had merely said that as Georgia was most like his type, she may have been put in for him. He says “I can’t wait to start playing this game like you are now. I’ve just realised who you 3 are now”. Kirk then accidently hits Georgia with an oar.

The twins tell Kirk that he had said to Georgia that the girls had been placed in here because of him. Kirk does not take this well, and says to Frankie who has walked in “come and listen to this shit here.”

Frankie admits to the twins that he also nominated them because he doesn’t feel they talk to him. The girls argue back by saying that they are offended by the boys, and their constant talk about their genitals.

Kirk says to Georgia “I realise now, when we have nice chats that they aren’t nice chats because you go back and tell people.”

Georgia explains that all of this was because he had pissed her off, Kirk says “if you want me to piss you off, I really will.” Georgia says “I don’t understand why you are in a mood” to which Kirk replies “Just shut up, because I am.”

Natalie and Gareth come in and try to pacify the situation and Georgia beings to cry. The twins say to Kirk “you’re not being sensitive to her feelings.” Kirk again takes this comment badly, but before he says anything further Frankie says to him “Bite it, like you have never bit it before.”
Georgia tries to leave the boat but Natalie stops her so they don’t fail the task.

3:51pm
A few of the housemates are in the garden. Kirk and Frankie and mulling over the argument that took place earlier on. Frankie jokes “do you think this means I’m not getting any birthday sex with the twins?”

Georgia and the twins are also discussing the argument. The Twins say of Kirk “he is just pure jealous of us, he nominated us because we aren’t f*****g him” they say that the boys will get drunk later and try and apologise to which they suggest they all ‘play sad’. The twins say “we know we have already won, we are the three prettiest girls in the house”

7:34pm
In the living area the housemates have gathered for the final task. Gareth has 60 seconds to open a box which is inside a number of boxes. Inside the box is the number 12, which represents the number of fails the housemates must not exceed. The housemates have only incurred five fails and have therefore passed the task.
As its Frankie’s birthday, Big Brother treats housemates to a rock themed party. Frankie tells Big Brother later in the Diary Room that this is “the best birthday in the world” adding that “the girls look fit, but they always look fit” and that Gareth ‘rocked it’ tonight.

11:09pm
Whilst the party is in full swing in the living area, Michael is resting in the bedroom. Denise comes in and asks Michael to join them for one last drink to wish Frankie a happy birthday. Michael says “I’ve already wished him a happy birthday” but Denise insists that he get up and join them for one final drink. Michael, who is starting to lose his patience, starts to put his shoes on saying that he doesn’t need to be told what to do. Denise says “I just wanted to come and get you for a glass of Jack Daniels” Michael responds “and that’s what I’m doing”

Michael walks out of the bedroom. Denise sits on the bed disheartened asking herself “f*****g hell, what am I doing wrong?”

In the living area, Nicola asks Michael what is wrong. Michael explains that Denise is irritating him again. He tells her “honey, she just doesn’t know how to leave something alone. She is just so self-serving.”

Denise is crying in the bedroom, upset about Michael. She tells a few of the housemates “I’ve had some of my best belly laughs with him.”

When Denise leaves to go to the bathroom the twins say to each other and a few of the housemates “She has a crush on him, and wants to hang out with him.”

12:37pm
Frankie’s party has relocated to the garden. The housemates are in the party mood, as is Denise. She takes off her top and trousers and joins a few of the housemates in the hot tub where she exposes her breasts and causes a stir. Gareth and Michael are in the kitchen looking into the garden and at Denise. Gareth says “Oh f*****g hell, oh god!” Nicola runs through the house and into the garden to try and get Denise out, along with a few other housemates. Michael says “for days and days I have been telling you guys, she can’t handle her drink” adding “She’s too old to be running around like that.”