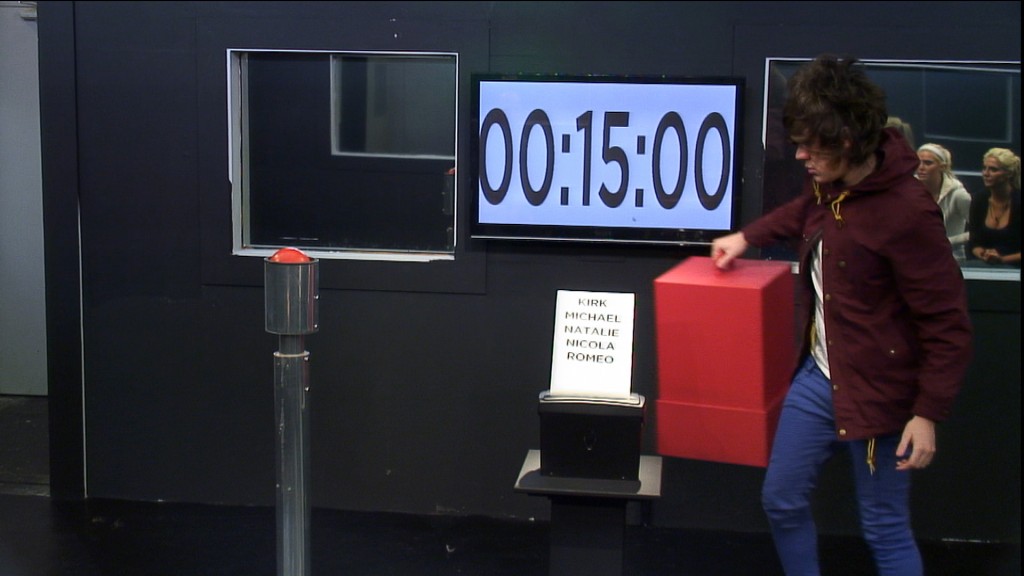 9.05am
It’s raining on the Big Brother house this morning and the dark mood continues, as housemates wake up after the face to face nominations last night. The tension between Michael and Denise hasn’t lifted.

Michael is up early and looks up at the sky from the garden. “Good morning Big Brother,” he whispers. In the diary room, he confides in Big Brother: “That was a good one you pulled last night Big Brother,” he says referring to the live nominations. He starts to talk about Denise, reiterating his feelings about her “I don’t want to live in this house any longer with that woman.” Later on in the diary room, Denise talks to Big Brother about Michael stating that she’s lost all respect for him and calling him a ‘hypocrite and a w*nker’.

11.31am
The twins are planning their eviction outfits and are thinking about all of the possibilities. They decide that “pants” and “skinny jeans” may be the way forward with the cold English weather. In the garden, Michael is napping and Denise is smoking. Neither of them acknowledge each other.

Nicola is fed up of the mess in the Big Brother house and has come to the diary room to complain. “This house is an embarrassment!” she screams, “I’m gagging when I walk in there. The mess in the house is shown and later Nicola tells the rest of the housemates, “I’m hanging up my Marigolds in protest.”

3.50pm
Last night Romeo nominated Frankie in the face to face nominations. He says that he likes Frankie as a friend but doesn’t like some of his rude remarks: “Obviously he is young and he still has a lot to learn with regards to women” he tells Big Brother. In the bedroom, Frankie is trying to impress the twins showing them a condom. “Girls, if you ever need it, it’s there!” he shouts over, waving the condom in the air.

Michael is trying to make amends with Natalie in the kitchen and he watches her chopping up vegetables. “I miss doing this stupid thing with you,” he says and she looks up and smiles at him. Michael continues to try and be friendly to Natalie before she tells him how he has made her feel: “You made me feel very cross last night,” she starts, “You don’t realise how loveable you are!” Michael apologises for his behaviour and Natalie quizzes him on his reason for nominating Denise, in particular the way he called her “emotionally disturbed” on live television. “I thought it over many times and thought about other ways to phrase it. She still would have broken down in tears,” he says, “it’s her issue, not mine. She won’t drop the bone.”

6.59pm
For today’s task, the housemates are faced with a dilemma. They are split in to two teams and are tempted by the chance of reading letters from home. In separate rooms, the two teams have 15 minutes to decide whether to shred the other team’s letters from home in order to save their own. When they hear the instructions, housemates look shocked and don’t know what to do. “I can’t do it to anyone,” Kirk says before Nicola interrupts, “I’d shred theirs for mine. I want my letter!” Nicola decides that she wants to shred the other team’s letters to save her own, saying that she wants to hear from her children. As Big Brother starts the 15 minute countdown, Nicola jumps out of her seat and pushes the button shouting “Shred! Shred! Shred! I’m really sorry but I wanna know my kids are alright.” Michael, Romeo and Kirk go to hug Nicola and Michael says “you didn’t even hesitate” before adding that if Nicola hadn’t pushed the button, he would have. Romeo looks down saying, “I feel bad.”

7.34pm
The housemates are reunited in the living area after the task and as the other team walk in, Nicola apologises admitting that she pressed the shredder buzzer. Denise and Nicola hug and housemates reassure her that it is ok that she shredded their letters. First up, Frankie reads Kirk’s letter from his dad and Kirk gets very emotional. “Happy tears,” Gareth smiles. At the end of Romeo’s letter from his mum, he smiles saying “I love you mums.” Nicola admits that she feels “really guilty” for denying the other housemate’s their letters and cries when her letter is read out. Natalie is also in tears and housemates all gather round to comfort each other.