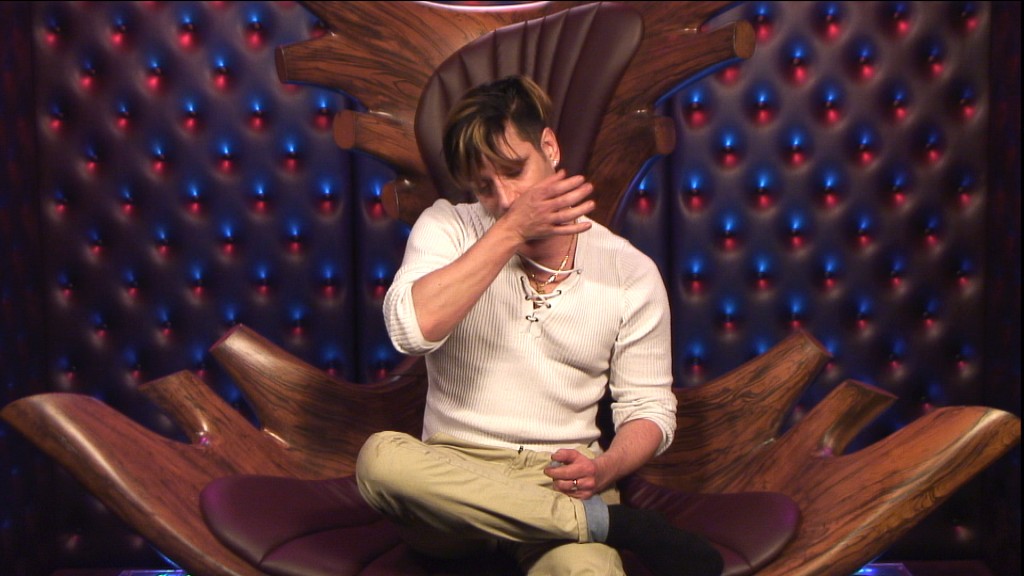 Wanna know what went down in the Celebrity Big Brother house on day 4? Read on…

8.50am
The celebrity housemates are waking up to their first day of nominations. During the night, the snoring in the bedroom has reached new levels. ‘It was like a frog song,’ Natalie says. Karissa and Kristina are doing their makeup. Michael is in the kitchen, ready to work out: ‘Big Brother, you are the God of all things. Open that freaking gym,’ he says.

Whilst some housemates are working out in the gym, Kirk and Frankie are in the smoking area, talking about another bad habit; Michael’s snoring. Natalie enters the garden, ready for a morning swim. ‘Jump in!’ Kirk tells her.

11.08am
Big Brother announces that housemates will be required to nominate today. Housemates seem shocked and look around at each other, unhappy at this revelation. ‘We’re all mature, we?ll all take stuff on the chin,’ Kirk encourages.

11.20am
Frankie and Kirk are having a man-to-man chat in the garden. Frankie admits that he is feeling sexually frustrated and Kirk talks about what he finds attractive in a girl. In the kitchen, Michael is complimenting his housemates: ‘Everybody looks so pretty today!’ but Natalie has sussed him out and replies ‘Only because you don?t want to be nominated.’ All of the housemates laugh.

12.08pm
Kristina and Karissa are talking about who they are going to nominate. Denise is called to the diary room as the first housemate to nominate. She gasps at the prospect of nominating for the first time and the twins laugh ‘you?re up first!’

12.49pm
In the bedroom, Frankie is talking to Michael about his Hollywood success. Frankie says that fans usually ask him for pictures and that he would miss it if they didn’t. In the diary room, nominations are continuing and Georgia is choosing the housemates she feels deserve to leave this week.

2.32pm
Nicola is alone in the bedroom and says that she is missing her family. When Kirk sees that she is upset, he comforts her by giving her a cuddle. Karissa, Kristina and Georgia are talking about who they nominated. They all start to whisper about Nicola and the twins are annoyed that Nicola doesn’t believe that their ‘butts’ are real.

3.12pm
Michael and Andrew are joking about Michael having his own Big Brother style show called ‘Michael’s World’ where he is the ‘boss.’ In the diary room, Kirk nominates and is followed by Michael. In the living area, the boys are playing a game where they throw tangerines at Andrew’s bottom. Gareth makes a good shot and everyone laughs as Andrew jokingly squirms.

4.41pm
Andrew is telling Romeo about his fans in the smoking area and says how his career has gone ‘crazy.’ Meanwhile, Nicola, Natalie and Gareth are in the bedroom, talking about their worries for Andrew. Natalie says that she feels he is ‘quite deluded. He thinks he is going to be a judge on X Factor next year.’

7.47pm
The housemates are gathered to hear the results of this week’s nominations. When Georgia and Andrew are announced, Georgia says ‘I knew it. I thought I’d be up so it’s fine.’ All of the housemates get up to hug each other and Andrew says that he also expected that result. In the smoking area, he confides in Georgia: ‘We’ve just got to put up with it for 2, 3 days.’

7.56pm
Some of the housemates are gathered in the smoking area, discussing the nominations. Andrew explains to the housemates that nominations would be edited and worries that they look ‘two-faced.’ Kirk and Natalie try to lighten the mood and tell everyone that they need to just ‘enjoy it’ and make the most of their Big Brother experience. In the living area, Nicola, Natalie, Gareth, Frankie and Denise are also talking about the results of the nominations and agree that Georgia facing the public vote may encourage her to come out of her shell.

8.20pm
Housemates are enjoying a glass of wine in the kitchen. Andrew opens up to his housemates and says ‘I don?t want you to feel like you need to treat me differently.’ He seems down about the prospect of being evicted on Wednesday and says ‘There’s a lot more I can give to this show. I feel like I’ve gone.’

10.02pm
Nicola needs to get something off of her chest and asks Georgia how big her boobs are. Karissa, Kristina, Nicola and Georgia go to the bathroom to investigate. In the garden, Andrew is continuing to tell Romeo about his feelings towards being nominated. Frankie walks towards them and tells the news that the girls are all ‘showing each other their t*ts.’ The girls start to leave the toilet after comparing their breasts and Denise admits that she would love to not worry about having to wear a bra again. The twins are in awe of Georgia’s assets and say ‘think when she has kids how beautiful they’re going to look!’

12.08am
Andrew is still talking about the results of the nominations in the bedroom. Nicola, Natasha and Michael are trying to comfort him but he says he feels like he has ‘been judged.’ ‘Nobody wanted to make a decision, but everybody had to,’ Natasha tells him but Andrew turns and says ‘don’t over analyse. This is not my world.’ Later in the Diary Room, Andrew tells Big Brother: ‘I’m great TV but I’m very hard to understand. I’m here to be Andrew Stone.’