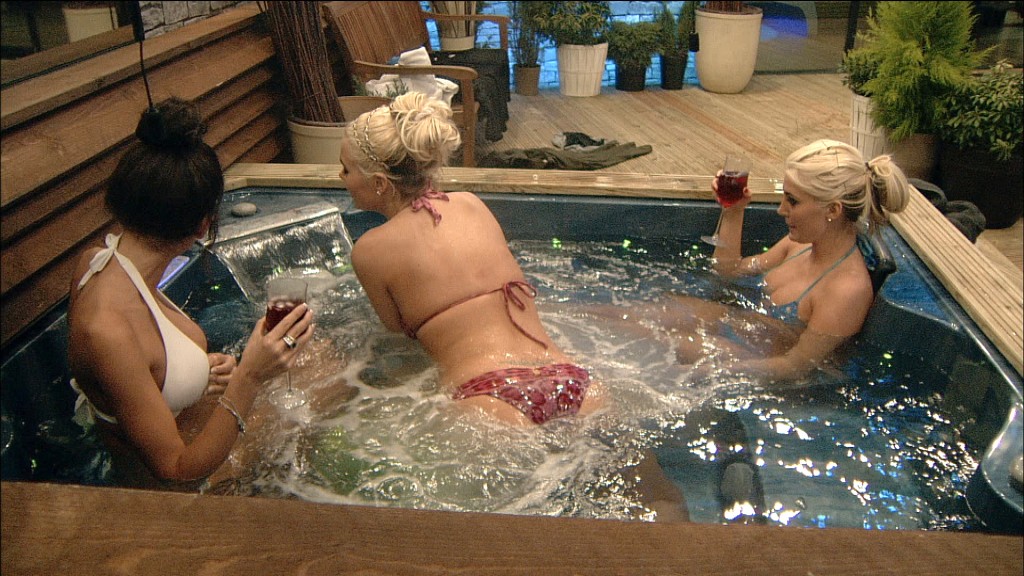 Here’s what happened on Day 5 in the Celebrity Big Brother House.

9.02am
It is the morning after Big Brother revealed that Andrew and Georgia will face the public vote. As Andrew is swimming alone in the pool, the housemates are talking about the stunned reaction in the house. “I was frightened of Andrew,” Natalie tells the housemates, “I was in bed petrified that he was going to do something.” “He’s taking it too personally,” Nicola adds.

Kristina and Karissa are discussing the tension in the house: “Andrew is making everything awkward. Now he’s so weird I’m trying to avoid him.” In the diary room, Natalie is talking about her concerns at nominating Andrew. She says that she feels she should explain her reasons for nominating him. She says that he has reacted so badly because he has “delusions of grandeur” and “is desperate to win this for his career.”

10.17am
Romeo is in the bathroom, perfecting his hair. In the gym, Gareth is sprinting on the running machine and Frankie tries to spur him on by shouting “go on son, keep going!” Andrew is curled up on the sofas in the smoking area. Nicola, Natalie, Natasha are discussing Andrew’s reaction to being up for nomination. Georgia tells the group that she is also upset about being up for nomination but “he’s sulking all the time.” Natalie agrees that he is being “childlike” and says that she can’t forget her previous “spat” with Andrew when he said “I know my stuff” and that Frankie will never be a rock star.

11.10am
Kirk is showing Frankie how to use the shower. In the smoking area, Andrew is speaking to his opposition, Georgia about being up for nomination: “I’m not down, I’m just chilling” he says. In the living area, the housemates continue to talk about Andrew.

Natalie decides to go to the smoking area to speak to Andrew about how he is feeling. “I’m relaxed, chilled, very accepting of the situation,” Andrew tells her. Natalie tells him how he made her feel last night and he is shocked, saying “[you felt bad energy] from me? You’re frightening me now saying that.”

12.31pm
The housemates are having a midday snooze. Natalie and Denise are having a cigarette when they suddenly hear the voices of Big Brother’s cheeky cherubs -Jedward. For the day’s task, the twins have returned to the house to set Natalie and Denise a secret mission. When the girls hear Jedward’s voices coming from the cherub statues, they squeal and laugh excitedly. “This is amazing, you’re amazing!” Natalie tells them. Jedward reveal that the first secret task is to steal Michael’s cowboy hat and bring it back to the secret hatch in the garden. “We’ve got to make this work Nat because then we might get cocktails” Denise tells her task partner. They hatch a plan to distract Michael and Denise talks to him on his bed whilst Natalie hides his hat in a towel and takes it out to the hatch.

1.06pm
Michael is massaging Denise’s shoulders. “Right in there, with your thumbs, hard!” she says, enjoying the massage and then she realises what she has said. The housemates all laugh, “I could just have this everyday, every minute of every day” she jokes. Kirk and Georgia are in the garden talking about how they are getting on. “I prefer your alter ego,” says Georgia referring to the Kirk who appears when he has had a few drinks. “If we were at home would you be kissing me and everything?” Kirk asks jokingly before telling her that she is “perfect.” Frankie interrupts the romantic moment by asking if he will get in trouble if he throws a lemon out of the garden.

1.20pm
Andrew is still talking about being up for nomination: “Don’t worry Georgia, if you do go they haven’t seen enough of either of us. I think I’ll get a worse reception than you, I’m quite outrageous and in your face” he says. Cheeky Cherubs Jedward reveal the second part of the mission to Natalie and she learns that she needs to make a sandwich for Karissa before taking some of the sandwich off of her and putting it in the hatch. Natalie and Denise concoct yet another brilliant plan and manage to succeed in the task. The next part of the secret mission is revealed as they put the sandwich in the hatch and the Cheeky Cherubs explain that the duo have to cut off a lock of Frankie’s hair. Denise manages to succeed in this as well by talking about using locks of hair as a good luck charm. As Denise cuts his hair he looks shocked: “I’m just trying to get over the fact you just cut a little chunk out of my barnet!” As they return the hair to the hatch, the twins set the final part of the task; to moonwalk across the garden.

2.16pm
Andrew has gathered the housemates to teach them some of his famous dance moves. “You’re looking great kids!” he shouts as he leads the class in the living area. The housemates have dressed up for the occasion and are wearing their best dancing attire. In the diary room, Gareth is reflecting on the dance class and tells Big Brother “I did my best to do an impression of LeeRoy from Fame!” He said the word that sums up Andrew’s choreography would be “camp.” Later on in the diary room, Andrew tells Big Brother that he would award Denise, Natalie and Gareth first, second and third prize for their efforts in the class.

4.40pm
Jedward are delivering the task reward to the diary room. In the bedroom, Michael is looking for his cowboy hat, upset that he can’t find it. “I don’t like games” he says. Denise and Natalie have been called to the diary room to receive the prize for their secret task and find their favourite meals and large glasses of wine. “We’re just gonna have to tell them [the housemates] we’re not hungry [at dinner time]” Denise says. Natalie laughs and holds up her wine, “we’ll go out pi***ed!” she laughs and Denise adds “it’s wine o’clock!”

5.50pm
Denise is sleeping off her secret meal and wine. In the living area, Gareth is asking Frankie about his ideal woman. “Anyone that says yes”, Kirk jokes and the rest of the housemates laugh. “Red hair,” Frankie confirms, “pretty much Jodie Marsh but piercings and tattoos.” Kirk adds that Georgia is his “perfect girl.”

6.28pm
Georgia and the twins are gossiping. In the diary room, Natasha is talking to Big Brother about her fellow housemates and says that she hopes to stay in touch with Michael when they leave the house: “He promised he’s going to introduce me to Denzel Washington!” she says. In the bedroom, Andrew is confiding in Michael about cheering himself up: “I got in a good head space this morning and collected myself. It’s a fresh day” he asserts. Michael then confides in the way that he “over thinks everything” and tells Andrew how he was watching Natasha sleep the other day, willing her to open her eyes with his “mind control.”

8.25pm
Nicola, Denise and Natasha are bonding in the bedroom and talking about shoes. The girls begin to tease Natasha by saying that Michael keeps looking at Natasha’s shoes. “He fancies you babe,” Nicola says and when Natasha squirms that he doesn’t she says “I feel like I’m in panto here!” “Let’s see who the slipper fits,” Denise jokes referring to Natasha’s shoes. Frankie is alone in the hot tub, shouting Kirk’s name. Kirk pops up from under the water and they talk about the upcoming eviction. Kirk contemplates Georgia being evicted and says “I’m gonna miss her” and then mimes crying and says “Big Brother, I’m willing to go now.” The pair laugh.

10.07pm
Georgia, Karissa and Kristina are in the hot tub. “I hope they didn’t pee in this thing!” the twins squeal, referring to the boys. “I had a sh*t though!” Frankie shouts over and they laugh.

In the living area, the housemates start talking about shoes again. “I’d like to see those things on your feet” Michael tells Natasha, referring to her leopard print high heels. “I’m intrigued,” Michael says and the rest of the housemates tease “go and put your shoes on!” Natasha emerges from the bedroom, wearing her high heels and Michael looks over, “see baby, what a difference that makes.” Denise holds her slipper next to Natasha’s leopard print heels and asks Michael which he prefers. “I want the one in the pink,” Michael replies, talking about Natasha. Denise laughs and says “whatever, you’re gagging and you know it.” They housemates continue to joke and Natasha admits to the group that the shoes have made her feel “completely different. I feel a bit horny.” She looks over at Michael. “Do you Michael?” she jokes and he replies, “yeah!”