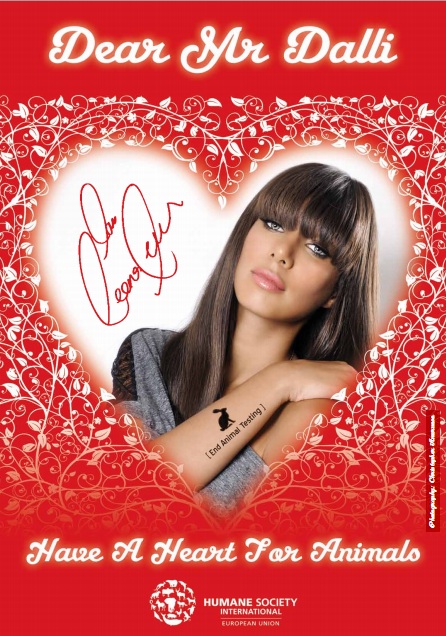 The European Union banned animal testing for cosmetics in 2009, yet ingredients can still be tested on animals in other countries and then sold in EU shops. A ban on selling these animal-tested cosmetics is due to come into force in 2013 and would act as a major financial incentive for cosmetic companies to kick their animal testing habit. However, Commissioner Dalli is now considering a proposal that would undermine the ban by giving cosmetics companies a loophole to continue profiting from animal suffering.

Leona wrote: “Like most girls, I love make-up, but my ethical principles are also very important to me. No new lipstick, eye-liner or other cosmetics ingredient can ever be worth the suffering and death of defenceless animals forced to endure painful toxicity tests. These gentle animals are killed by the hundreds in some tests, despite the fact that manufacturing products free of new animal testing is perfectly possible through the use of thousands of existing, safe ingredients. Animals have suffered enough – if their pain has been deemed immoral within the EU, it must also be immoral outside the EU. To trade in their pain would be hypocrisy.”

In countries such as China, Brazil and the United States, animals such as rabbits, guinea pigs, mice and hamsters are still being force-fed cosmetic products and ingredients, or having them dripped into their eyes or on to their skin. In some cases, animals are chemically overdosed to the point of death, while in others chemicals are fed to pregnant mothers to see the effect on their unborn babies.