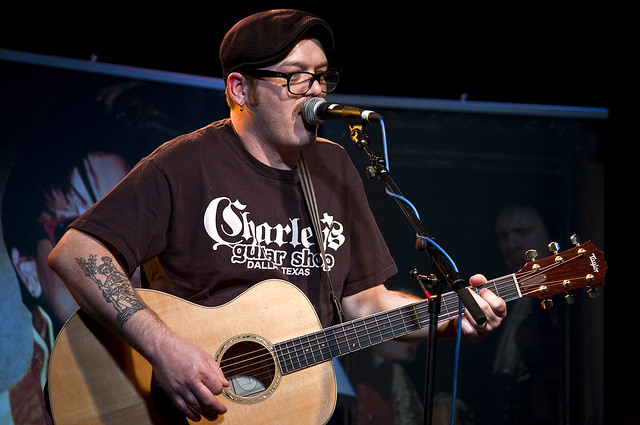 This month, half of Flecking favourites Bowling For Soup are visiting our shores for one of their legendary acoustic tours.

As much as we love their full band tours, you get something special when you attend an acoustic performance with Jaret Reddick and Erik Chandler. You don’t feel like you’re standing in a crowd watching a band on a stage, you feel like you’re just hanging out with your mates – your very talented, very funny, very charming mates.

Not only will Jaret and Erik be performing two sets each on this tour, Erik’s first set will be solo.

We didn’t just quiz Erik about the tour and his solo music, we also gave him an actual quiz on British slang.

Be sure to check out the UK tour dates below, always a party when BFS are in town!

Erik! How’s it going?
It seems to be going well today, but it’s not quite noon, so I’m not pointing to any
fences…

I hear you just visited the Middle East to perform for the troops, how did it go?
It was an amazing experience. Very inspiring to see the men and women who are involved daily in fighting a war. It’s really cool to be able to bring those folks a little break, and a piece of home.

You’re coming back to the UK this month and not only will you be performing two sets a night, you’re doing one totally alone! Excited? Nervous?
I’m excited. I just look forward to playing my solo material to some that might not have had a chance to hear it before.

What can you tell us about your solo EP?
I can tell you that it’s four songs of me exploring and sometimes greatly exaggerating bits of my life.

You fellas have a bit of a reputation for partying – do you live up to it?
We try… does that count? Sometimes we achieve great success, and sometimes that success leads to absolute failure!

What is your alcoholic drink of choice?
I’m normally a beer drinker. I used to stick to one American beer in particular, but these days I like to try things that I haven’t had. I have four different flavours in my fridge right now. Black ale, lager, porter, and there’s one that’s a mystery… doesn’t say what it is, but you can scan a QR code and go to the website and chime in on what you think of it.

We were delighted to see two Bowling For Soup tracks to choose from on the Kerrang! Rock 100 – why should people vote BFS like we did?
Why wouldn’t you? I don’t know if you’re aware of this, but we’re the greatest band ever.

1985 or Girl All The Bad Guys Want – do you have a favourite?
Hard to choose between those two…

Which three bands/songs would top your personal Rock 100 list?
Wow, that list changes daily. Today I would have to say New Dark Ages by Bad Religion, Summer On The Underground by A, and The Boy Who Stole Your Heart by Scott Reynolds.

And finally… When we tested Jaret on his British slang he did quite well. Do you know the meaning of the following…
Guff.
Well, in the States we would use the word guff to replace shit. As in, I’m giving you guff.
To guff here is to fart. What about bird?
Someone of the female persuasion.
Correct! Dogging?
Isn’t that like random sex… finding a place to park and flashing the lights or something, and just taking what you get?
Spot on! What about cock up?
If I cocked something up, I would have messed it up.
Very good! And finally, dog’s bollocks. For example, that shirt is the dog’s bollocks.
As in mutt’s nuts, as in awesome.
4/5! We have a winner!

The UK tour kicks off in Northampton on March 26, before stopping by Glasgow, Manchester, York, Birmingham, Southend and London. Click here for tickets.

You can read our latest interview with Jaret by clicking here.