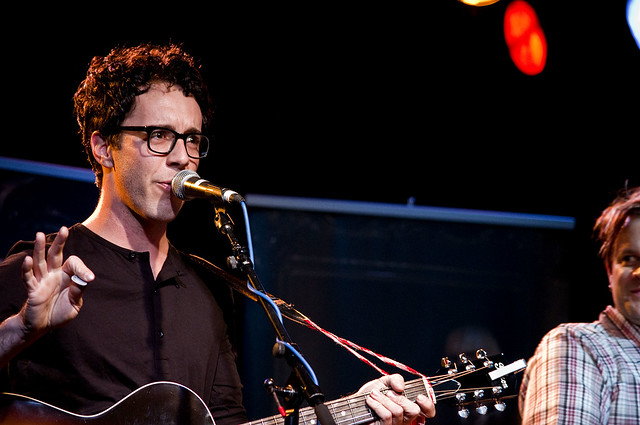 Supergroup People On Vacation (Ryan’s band with Jaret Reddick) were playing an opening set, but it was before the gig when Ryan made an impression. Jaret and I were having a chat about British slang (you can read that interview here) when I asked if there were any words he had encountered here that he hadn’t understood.

“There’s one – hold on, I have to ask Ryan,” Jaret said, before sticking his head in the other room to ask, “Hey Ryan, what’s the word for doing it in a car?”

I knew then that Ryan must be a pretty cool guy, and watching People On Vacation’s set only confirmed it.

I caught up with Ryan – ahead of his trip to the UK this month – to talk about his exciting work with Jaret, what’s going on with Smile Smile at the moment, oh, and a quick brush up on his Brit slang.

Hi Ryan, how are you?
I’m currently drinking Costa coffee in America while wearing Smurf pajama pants… I’m also extremely excited to return to the UK. Thanks for asking.

Tell us the story of how People On Vacation came to be.
Jaret came to see my other band [Smile Smile] perform at SXSW in Austin, Texas a couple of years ago. I remember leaning over to Jencey [Hirunrusme, his Smile Smile band mate] and going, “What the hell is the singer from Bowling For Soup doing here?!” [laughs]. Anyway, he apparently enjoyed the show and I gave him a CD. Shortly thereafter, BFS invited Smile Smile on tour. To which we initially – and promptly – said “NO”. We were sure the BFS fans would hate our indie-tinged acoustic based tunes. The powers that be talked us into doing the tour… and we could not have been more wrong as to how the BFS fans were going to treat us. They were amazing! Jaret and I became fast friends on that tour. At the end of the tour I had an epiphany. What if he and I found a way to write songs together and combine our extremely different musical worlds? I approached him with the idea – and if you didn’t already know – he liked it [laughs]. Before we knew it, we had written and recorded 15 songs in about seven days. It was the best kind of crazy.

Who came up with the name?
Jaret did, and I love it.

How would you describe the music you guys are making?
I like to think about it like this: Jaret is in a Pop/Punk band. I am in an Indie/Folk band. We combined our two musical worlds, but it’s definitely not Punk or Folk. So, that leaves us operating somewhere in the world of Indie/Pop/Rock. I like that world.

What do you bring to the band, and what does Jaret bring to the band?
Jaret brings all of his Jaret-ness. It’s a glorious thing to behold. He’s a big personality with a ton of happy, positive energy. He’s also an incredible songwriter. I’m weird. I know I’m weird. I’ve been told my whole life that I’m “different”. I like being weird. So, I guess I bring a little weirdness to the band. I’m also pretty good at writing songs.

You’re coming back to the UK to support BFS on one of their legendary acoustic tours. Excited?
Excited doesn’t quite cut it. The UK/Ryan love affair started last year. It was hot and heavy. When I arrive I may immediately get naked and run through the streets.

Are you a big party animal on tour?
Yeah, I guess so. I took it a little too far last year on the first night. I had to learn to pace myself. You know that whole “the rabbit and the tortoise” story. I used to be a party rabbit… I have to be more of a turtle.

What does the rest of 2012 hold for People On Vacation?
More music. More shows. The EP we released is really just the first six songs we did together. There’s still a full lengths worth of material that needs to be released. I LOVE our EP, and not to sound like an asshole, but some of the newer songs blow the older ones out of the water.

What’s going on with Smile Smile at the moment?
After taking a year off and trying not to kill each other, we just finished recording a BRAND NEW ALBUM! Consensus is, it’s by far the best thing we’ve ever done. For me, we can thank People On Vacation for that. Being in this new project taught me a lot… it also reinvigorated me as a songwriter.

How does band-mate Jencey feel about People On Vacation?
Surprisingly, she couldn’t be cooler or more supportive about it [laughs]. There was definitely a time when she would have hated it – just to hate it. These days though, she’s pretty damn great. All is well in Smile Smile Land.

And finally… We love testing bands from overseas on their British slang. We tested Jaret and Erik [Chandler, Bowling For Soup] on the following words, but do you know what they mean?
Yes! Love this! They made me an honorary Brit last year. Bring it on.
Guff.
Doesn’t this mean worthless? As in piece of shit? Like, that band is guff.
To guff is to fart. What about bird?
A girl.
Correct! Dogging.
This is one of my favorite words of all time. You know I know what it means. For the record, it means a PUBLIC GANG BANG! Preferably in a car… I believe.
Spot on! What about cock up?
Oh man… not sure if I know this one. Does it mean man up? As in, have some balls. Grow a pair etc…
If you cock up, you make a mistake. And finally… Dog’s bollocks, for example, that shirt is the dog’s bollocks.
Not sure about this one either… but my guess it that it’s a good thing. As in, that shirt RULES!
Correct! That’s 3/5 – you’re neck and neck with Jaret, but Erik is our winner with 4/5.

The UK tour kicks off in Northampton on March 26, before stopping by Glasgow, Manchester, York, Birmingham, Southend and London. Click here for tickets.

You can read our latest interview with Jaret here, and Erik here.