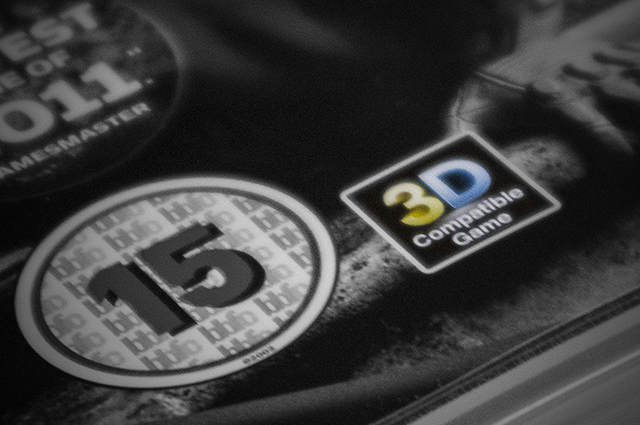 2011 saw 3D spill into about every form of media around, and gaming was no exception. Unlike watching a film, when playing a video game you are not an observer, you become the character on screen. 3D helps to fully immerse the player in the world in which their game of choice is set, regardless of whether it is the Rub’ al Khali desert or Sonic’s famous Green Hill Zone. In fact, it’s surprising just how much the combination of a 3DTV and a Sony Playstation 3 enriches the entire gaming experience.
All clips included are available in 3D so grab a pair of 3D specs (Polarised, Active shutter, Red & Cyan, Green & Magenta and Blue & Yellow all work). No glasses? No problem! Just select the ‘No Glasses” option to view in Cross-eyed 3D and embrace the inevitable headache! Oh, and you can watch in 2D but where’s the fun in that?

My first 3D gaming experience was Rocksteady’s some-how-better-than-the-original Batman: Arkham City – unless you count a few goes with the good old paper glasses and the Arkham Asylum Game of the Year Edition. As impressive as Arkham Asylum was, I didn’t find the inficolor 3D anything special and soon ditched the glasses and resumed playing in 2D. Most of those who did play the original won’t have had the forgettable experience of playing in 3D, and that’s because it was an afterthought, an added bonus only found in the Game of the Year Edition. So, I wasn’t excited when I discovered the sequel would have options to play in both inficolor and stereoscopic 3D. But I gave it a try, and was pleasantly surprised by the latter. This time, it wasn’t an afterthought.

I don’t know when I fell in love with gaming in 3D. Maybe it was when Solomon Grundy’s gigantic fist burst out of my screen, or when I entered a quiet museum and was greeted by a roaring T Rex, or perhaps it was when, for the one hundredth time, I glided through the dark skies of Arkham City, illuminated only by a few scattered neon signs and the bright blue lights that line the heavily armoured walls that seal off the sleaziest streets from the rest of Gotham.
Despite huge critical success, the future of the Arkham series is uncertain, with rumours of a video game based on upcoming Batman flick The Dark Knight Rises. Even if it means we won’t get any more of these glorious 3D games, the ending of Arkham City was perfect. Paul Dini, who wrote both Arkham games, suggested that next Rocksteady tackle a next superhero, such as Superman or Captain Marvel. I would welcome any game made by Rocksteady, particularly if it’s in 3D.

By the time the fourth game in the Assassin’s Creed series, Revelations, hit I was a big fan of 3D gaming. The thought of free running from roof to roof in glorious 3D was a very attractive one. It didn’t disappoint. Brand new features such as zip lines and a wide variety of bombs looked great and I’ve never felt closer to the action when playing an Assassin’s Creed game.

Sonic Generations sees a mixture of the old-school side scrolling Sonic levels and the more modern game play involving special moves and combat. The game, which commemorates 20 years since we met the hedgehog for the first time, also includes the option of playing in 3D. The fast pace of Generations makes it perfect for 3D. It’s fun to speed through the familiar levels as the blue blur, which have been given a fresh coat of paint and added depth.

I’m not embarrassed to admit I spent more than a few hours with my controller in my hand and my polarised 3D specs on my face just enjoying Naughty Dog’s epic threequel Uncharted 3: Drake’s Deception. It’s a game I struggle to find fault with. If I was nitpicking I could point out that, despite the name, I don’t recall any particular examples of deception in the game (perhaps THAT’S the deception). The Uncharted series is renowned for its breathtaking visuals and stunning landscapes, that were all the more striking in three dimensions. The entire game seemed a perfect candidate for 3D, with locations such as a hugely detailed London pub, a flaming chateau in France and the endless Rub’ al Khali desert. During Nate’s stroll through the desert, I found myself squinting as the wind blew sand into my face. Hand to hand combat has a much larger role in Drake’s Deception than in the previous games in the series, and each cinematic brawl is so much sweeter when playing in stereoscopic 3D. The depth added definitely raises the stakes – when scaling a building, you realise just how high up you are, and it makes you all the more careful when jumping to the next platform.
Uncharted is a successful series that I have no doubt will continue, and it wouldn’t surprise me if Nathan Drake’s next adventure is also presented in 3D. Also, I think 3D would aid in fully realising the fungus ridden world of Naughty Dog’s upcoming post apocalyptic title The Last of Us.

Sony is eager to push 3D, as a company that also makes a range of 3D TVs and 3D Blu-ray players. Almost a year ago, there was a controversial PSN hack that forced Sony to take the network down from 24 days. To make matters worse, it was revealed that the hackers had taken hold of players’ details, including names, addresses and other personal information. In an attempt to restore the trust many had lost in the company, Sony offered a number of free games in a Welcome Back package. One of them was WipEout HD, a racer which can be played in 3D, developed by Sony’s Liverpool studio. At the time when I downloaded I didn’t particularly like the game, but when replaying it recently I found the 3D impressive. The player’s futuristic vehicle sits just outside the screen, flying at breakneck speeds past the competition. Unfortunately, no matter how good the 3D is, it doesn’t improve my terrible skill at racing games.

Back in May 2010, Ubisoft CEO Yves Guillemot prophesised that by 2012 50% of all games on the market would be 3D. While these numbers aren’t entirely accurate, 2011 did see a large number of 3D games released, notably with the launch of the glasses-free Nintendo 3DS, but the boom is far from over. 3D games set to come out include Metal Gear Rising: Revengeance, Silent Hill: Downpour and The Last Guardian. It’s expected a number of other games will also include 3D support. Following the inclusion of 3D capability in other games in the series, it is expected that games such as Assassin’s Creed III and Uncharted 4 will follow their example. Over the past few years, 3D has made a great start in becoming the next big thing, and I expect it to continue.