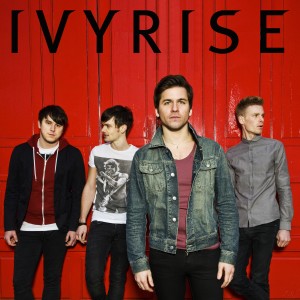 You certainly have! You played 21 dates on the McFly tour. What was your most memorable moment?

Stepping out stage in front of 4500 screaming McFly fans at hammersmith apollo!

So, come on, are you gonna dish the dirt on McFly for us!?!

Haha, there’s not much dirt to dish! They’re a wicked bunch of lads, who treated us really well, and made us feel very welcome out on the road with them! The five bottles of champagne they had waiting for us in our dressing room on the last night was particularly kind.

Nicely done! Let’s talk tour. Living in such close proximity on tour we can imagine things can get pretty smelly. Truth time, which member of Ivyrise is the hardest to live with on tour?

I can assure we can all boast excellent levels of personal hygiene, it doesn’t get unbearably smelly. In terms of living in each others pockets though, we’ve learnt the key to not getting on each other nerves is to know when to give each other space. We’ve been touring a lot together over the last three years so we’ve got this down to an art now.

We were almost deafened by the screaming fans, but what we really want to know is which member gets the most female attention/ most male attention?

From our experience we get a fairly even amount of attention, Josh gets the most male attention. It’s the chiseled jaw that does it I reckon.

You’ve supported some pretty fantastic bands like McFly, Bon Jovi and Kula Shaker.
What is the best piece of advice you’ve been given?

Never eat yellow snow, and also when you’re in situations such as supporting big bands on big tours, try and take in as much as you can, learn from what’s going on around you and don’t take anything for granted.

We’ve heard that one too. Anyway, swifty moving on! We’re loving the album. Tell us a little more about it.

We’re glad you’re enjoying it, we’re really proud of it and hope it’s the first of many!

We’re torn between ‘Line up the stars’ and ‘Hurts’ as our favourite, what’s your favourite song on the album and why?

I would have to say El Paso. It’s named after the place in Texas where we went to record the album, it really developed while we were over there so it brings back a lot of great memories.

So, we hear Mr Jason Perry produced the album. What was it like to work with him?

Yeah, it was an incredible few weeks! We stayed on a ranch in El Paso that had been turned into an amazing studio complex. Jason’s got the best attitude when it comes to recording music, his enthusiasm makes the whole experience so much fun and then at the end of it, you’ve recorded an album without realising it!

We’ve had quite a few requests from fans that you do this interview naked – any chance you’ll follow in the footsteps of McFly and pose for a naked photo-shoot or strip on stage?

Well, I have to say we have no plans to do any naked photoshoots or shows but you can never say never I suppose.

Sadly, you’ve had to postpone your headline tour. (We’ve had lots of fans contact us asking us to pass on their best wishes). We’re very much looking forward to your new tour announcements soon, in the meantime your European fans are desperate to know if you have any plans to take the tour over to Europe?

Yeah, we’ll be back out touring England as soon as possible, and although nothing is planned so far for the rest of Europe, we’re desperate to get out there soon!

Thanks guys, we look forward to catching up with you soon.

To keep up with all the latest Ivyrise news, information, and where to buy their fantastic album head over to ivyrise.com or hit them up on Facebook and Twitter