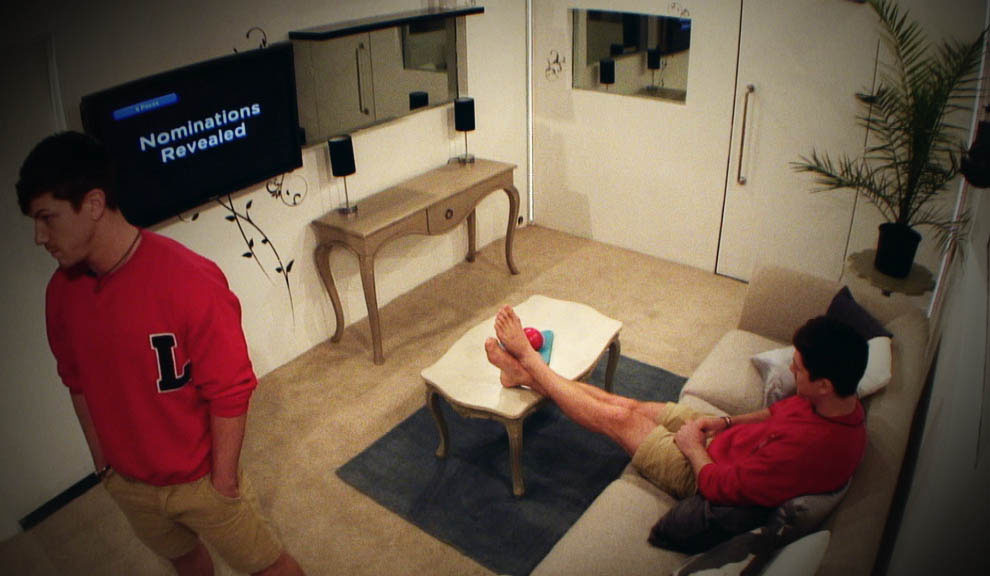 Day 23 in the Big Brother House…

Yesterday housemates began a series of tasks to win points, and points mean pounds for this week’s shopping budget. They had to sacrifice belongings, their vices and the opportunity to spend time with their loved ones.

In order to win this week’s luxury shopping budget the housemates have to score at least 100 points. Yesterday they scored an impressive 70 points. Today the tasks continue starting with an early morning alarm call. The wake up alarm will continue playing until housemates are up and out of bed. However, if housemates wish to have a lie in one of the housemates can press the snooze alarm which is placed in the living area, which will entitle the house to have an hour snooze. If this happens the consequence is five points deducted from the score total. They all agree to get up and head to the sofas in the living area.

Luke A, Lauren, Adam and Lydia are upset that the snoozers have cost them five points. Lydia says, ‘I think if that was anyone else sleeping, can you imagine what they would say? Luke S ‘the boyfriend’ you can tell he’s fuming.’ Lauren shakes her head, ‘I swear the intelligence levels in here…’

Caroline says to Luke S, Conor and Arron that Lauren needs to control her temper and that she’s too concerned about what people think.

Lauren finds a moment to vent her frustration in the bedroom. She is upset that she didn’t choose to speak to her sister. She brands the group ‘selfish’ and that they are ‘lazy, horrible people.’

Shievonne comes to the diary room, ‘We are exhausted and tired. Sara, Caroline and Ashleigh were apparently snoozing and we lost five points. I’m like its only five points!’

In the living area, it seems like Luke S’ work is never done…he is seen with a needle and thread, mending a garment.

Adam is called to the diary room to take part in today’s task. Two breakfast options are laid out in front of him: a raw onion and a full English breakfast. If he chooses to eat the whole raw onion like an apple, he will win the group 10 points. However, if he picks the full English option five points will be deducted from the group’s total. Adam shouts, ‘I f**king hate onions!’

This week’s eviction is on Caroline’s mind. In the bedroom she talks to Scott and Deana and tells Deana, ‘I don’t want you to leave or Lydia.’ Deana replies, ‘Scott does…’ He quickly says, ‘No I don’t.’ The conversation shifts to Caroline complaining about Adam, ‘He’s just irritating.’

Back in the diary room Adam decides to tackle the onion like he’s eating an apple. He successfully eats the whole onion and wins 10 points. He shouts, ‘My mouth is burning!’

Adam has onion breath and goes to the bathroom toilet to be sick.

Ashleigh is in the bedroom putting in her new died hair extensions. Luke S isn’t too impressed.

Male model Arron is in the garden talking to Sara about his other career, martial arts. The fellow model says, ‘You can’t be a model and do that, you might damage your face!’ He replies, ‘I did do for a year. Glad to hear you care!’

In the garden, Lydia is telling Becky, Scott and Caroline about how her famous fiancé proposed to her by DVD. ‘It was a whole big story of our relationship. He wrote all these amazing words like, you’re the only person who has ever truly loved me.’ The dancer continues, ‘It was so clever the way he did it. It was amazingly nice.’ Caroline comments, ‘So romantic.’

Big Brother has called Caroline into the diary room for her part in today’s task. Three sweetie jars full of sweets are positioned in front of the housemate, labelled with different amounts of points that she could win for the group. Caroline says, ‘This is the funniest selection of sweets in the whole world! Really excited.’ Big Brother explains all she has to do is eat the contents of one of the jars whilst spinning on the roundabout in the garden in under 10 minutes. Caroline picks the safest option, the five points jar.

In the garden, Big Brother asks for a volunteer to spin her on the roundabout. Adam jumps up to volunteer; Caroline isn’t best pleased and the task begins.

Arron cheers, ‘Come on Caz you should nail this as this was the easy option!’

Adam says he could go much faster, Caroline doesn’t want to go any faster. She starts to get upset and asks Adam to slow down. Caroline successfully passes the task and wins the group five points. She tells Sara, ‘I don’t understand why did had to do the spinning?’

Adam is not happy with Caroline. Luke A admits, ‘She should have at least tried to get more (points) back.’ Adam says, ‘She doesn’t bring anything to the table. Task wise or anything.’

Lydia butts in, ‘Maybe in hindsight you should have let someone else spin her.’ Adam agrees, ‘Yes, I absolutely should of.’ Deana inputs, ‘But you haven’t done anything wrong.’

Caroline shares her feelings about Adam in the dairy room. ‘I can’t stand him. I find him unbearable.’ She continues, ‘I absolutely hate him and feel really, really upset. I don’t know why I react in such an abnormal way.’ She starts to cry.

In the living area Luke S is wondering why Caroline picked the safest option as she has one of the sweetest tooths in here. Arron defends her, ‘She’s scared of rides…you know what she’s like, she’s a 21 year old baby.’

On Caroline’s exit from the diary room, Arron jumps out and surprises her which sends the house into fits of laughter.

Luke S is next to face the room of temptation. Big Brother announces to him that if he chooses to press the play button he will be able to watch a DVD revealing the nominations from the past three week, however doing so will cost the group five points. Luke S contemplates his decision, ‘It would be a good watch and as Lydia says, very valuable information.’

After sometime he decides to resist and return to the diary room. Then Big Brother offers him another temptation…they are willing to show him as many nominations as he wishes from the week at a cost of one point for one nomination.

Luke A rushes to the dairy room in his towel. ‘Embarrassing, but the toilet is blocked and I think I’m partly to blame!’ He asks for a toilet brush to solve the problem.

In the kitchen, Ashleigh, Caroline and Scott are talking about Lauren. Ashleigh says, ‘She’s two-faced.’ Caroline adds, ‘She’s one of these people that obviously doesn’t have any friends at home.’ Scott says, ‘She does though. She’s outspoken and is being more natural.’ Caroline concludes, ‘She can be very nice.’ Ashleigh agrees. Lauren then enters the kitchen unaware that she is being talked about, the three housemates go silent and Caroline rolls her eyes.

For the final part of today’s task, three housemates have to take part in the final throw down. The chosen housemates will have to throw themselves along a water slide and attempt to land in the positive scoring zone. However, if they go too far they risk loosing points. Housemates must score a total of 20 points in order to make it a total of 100 points to pass this week’s shopping task.

Scott is up first and scores five points. Luke A is up next and slides down the water slide to what housemates believe is the 20 point mark, they all cheer! Sara shouts, ‘That definitely is in 20!’ Conor is the final housemate to take part and reaches the 20 point mark. More cheers!

Arron shouts, ‘Boys you nailed it!’ All are pleased and comment that they had a 100% pass rate on all tasks.

Luke A is bewildered and annoyed. Everyone thought he had scored 20 points but all are happy as they passed the task.

A disgruntled Luke A and Adam go to the diary room to ask where Luke A went wrong. Big Brother confirms that the photo finish showed it was a minus five points score as Luke A had moved his body. He claims he didn’t remember doing that. ‘It is made out that I cheated, I didn’t cheat.’ He adds, ‘I could have spoken to the Mrs and lost five points. I feel doubly gutted that I lost us five points.’

Luke A is still upset about his task result. He tells Adam and Lauren, ‘I’m so embarrassed. I feel like so ashamed, like I f**ked it up.’
Lauren attempts to make him feel better, ‘You didn’t f**k up, we still passed.’

Adam says he shouldn’t feel like that and asks why he feels ashamed. Luke A replies, ‘It’s cos I was proving something to myself. It’s the f**king story of my life. I f**k up.’

Luke S goes to the diary room to talk. He confirms that he liked the task at the end and he said he saw Luke A pull his fingers back and felt the chef had let people down. ‘Caroline could have done the 10 points but she played safe. We got 100 points and that was the name of the game.’ He confirms that he completed his part of the task for the group.

Caroline is talking to Sara about Adam, ‘He deserves an apology and explanation to why I’ve been horrible. I’ve been feeling irritable.’

Some of the housemates are on the sofa, Ashleigh asks, ‘Why do chickens lay eggs?’ Adam, Deana, Luke S then attempt to inform Ashleigh about eggs and where chicks come from. Ashleigh is amazed about what she is being taught. Adam is shocked that she didn’t know why chickens lay eggs. Ashleigh says, ‘I never want to eat an egg again!’

Luke A and Lauren are in the smoking area, not smoking. Luke A says, ‘It’s hard even though they have been supplied gum and patches.’ He confirms it’s not fun and games.

In the garden, Caroline decides to speak to Adam. ‘It’s not a personal attack. I do really like you. I just don’t react well and I’m really sorry. I genuinely like you.’

She continues, ‘I’m really, really sorry. I’m just not a normal person at times. I find it difficult to contain myself sometimes. I’ve been feeling like s**t and have taken it out on you.’

Adam listens on and reacts, ‘I appreciate it.’ The blonde continues, ‘I feel awful, I’m insecure and have low-self esteem.’ Adam says, ‘I hear what you saying but I’ve never showed you anything different.’

She gets upsets and says, ‘Obviously you are not a bully, I am.’

Adam forgives Caroline and they hug. Scott and Becky look on form the living area.

Adam heads to talk to Luke A. Luke A asks, ‘Did you buy any of that? Adam replies, ‘She’s an insecure girl. I’m only going to take it with a grain of salt.’ He concludes, ‘What f**king day.’