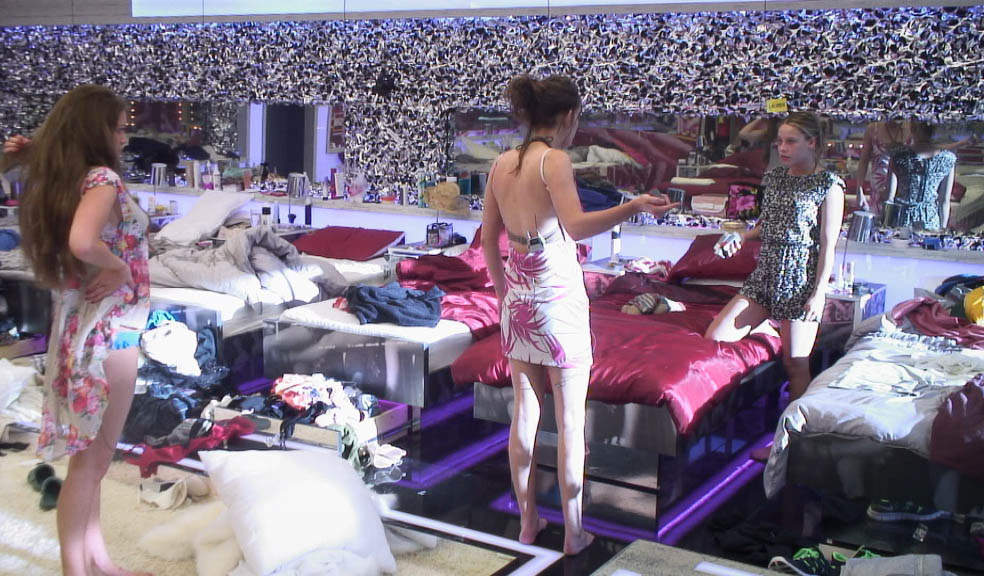 Day 24 in the Big Brother House…

Some of the housemates are sunbathing in the garden. Arron rubs sun tan lotion onto Sara’s back. Becky says to Arron, ‘What about me you cheeky bugger.’

Lydia and Shievonne are in the bedroom talking about what it’s like to be in the house. Lydia comments, ‘It’s not real until you’re up for eviction, that’s the 100% truth. I’ve had to deal with it from day one.’ Shievonne agrees.

Earlier in the week Conor won the reward of having sole responsibility of doing this week’s shopping. Armed with an £800 budget, he reads through the shopping list. Big Brother has included some additional items on the list for the house including: a giant water pistol, swing ball and table football. Big Brother asks, ‘Is there anything your housemates would quite like?’ He replies, ‘I don’t give a s**t about the other housemates, it’s all about me!’

Conor continues to write the shopping list on the black board, however, gets quite confused over some of the calculations. ‘I’ve never done shopping before! I’ve shopped before but not for 14 people. I’m impressed.’

He orders table football, a giant bowling set, swing ball, protein shakes for the boys and cigarettes for the house, one pack each and two packs for Lauren.

Shievonne and Ashleigh are talking about fellow smoker Lauren. Shievonne tells Ashleigh that when the cigarettes are delivered along with the rest of the shopping, she must get to the cigarettes before Lauren.

After more than 2 hours in the diary room, Conor finally completes this week’s shopping list. He decided to spend over a third of his budget on special treats that include protein shake and garden games.

He tells the housemates that he’s ordered a swing ball, table football – most of the housemates cheer – as well as cigarettes and tobacco for the smokers. Conor says that he ordered two packets of cigarettes for Lauren because she had the most cigarettes destroyed earlier on in the week. Lauren is overjoyed, ‘Oh Conor, thank you so much!’

It’s like Christmas in the Big Brother house as some of the special treats that Conor bought have arrived. Let the games commence! Everyone is having fun in the garden playing skittles, swing ball and table football.

Becky asks Luke S, ‘Is swing ball an Olympic sport? He replies, ‘Is that a serious question?’ She nods. He confirms, ‘No it’s not.’ Housemates laugh.

Conor’s hard work is about to pay off as this week’s shopping is delivered. Ashleigh runs and grabs the cigarettes.

Lauren asks, ‘Have you got my two packs?’ Ashleigh replies, ‘We can share.’ Lauren replies, ‘But Conor said that I had two packs…’

Ashleigh starts to get annoyed, ‘Oh no, we gotta sort it out and share. Who do you want to have the cigarettes Conor? He replies, ‘I don’t care I don’t smoke.’ Lauren says she will just have the two packets and not touch the tobacco.

Adam advises Lauren, ‘Don’t make it an issue… you have two packs of cigarettes.’ Lauren is very pleased.

In the bedroom, Ashleigh says to Lauren, ‘I’m not having this.’ Lauren defends herself, ‘But Conor said he got me two packs as it was my actual money that was cut up.’

They continue to argue and Ashleigh storms off. Lauren says she knew this was going to happen.

Nominated housemate Deana goes to talk to Big Brother. She admits that she is excited to see what happens on eviction night, ‘What will be, will be. It will be a nice confidence boost to see if people have picked up the phone for me to save me.’ Deana continues, ‘As time goes on I’ll get stronger and be more comfortable here.’

Lauren is in the toilet talking to herself about Ashleigh, ‘What the f**k have I done to you Ashleigh? I hate her. What the f**k.’

Lydia and Luke A are in the smoking area, Lydia is concerned about Lauren. Lydia says how much she wants to be saved tomorrow.

Lauren goes to the garden where Luke A and Adam are sat and tells them how Ashleigh is still angry with her she says, ‘Every week is another reason to hate me, I’m going to start flirting with Luke S.’

Ashleigh is running a bath.

Becky is entertaining some of the housemates in the bedroom with her elephant impression.

Arron and Conor decide to steal Ashleigh’s bath and jump in the tub. Ashleigh shouts, ‘Oi, get out!’ They laugh and jump straight out as it’s so hot.

Housemates have eviction on their minds. Deana comments, ‘I have a philosophy in life…I’m very negative then if something good happens I’ll be happy. My cup is always half empty.’ Scott jokes, ‘Oh god, don’t boast about it!’

In the garden Caroline says she will miss Lydia as she depends on her like a friend. She also adds that Luke A, Adam and Lauren will be devastated if Lydia leaves. Lydia thinks about what she will miss about Deana. She pauses, ‘What will I miss…the knife in my back!’ The housemates burst out laughing.