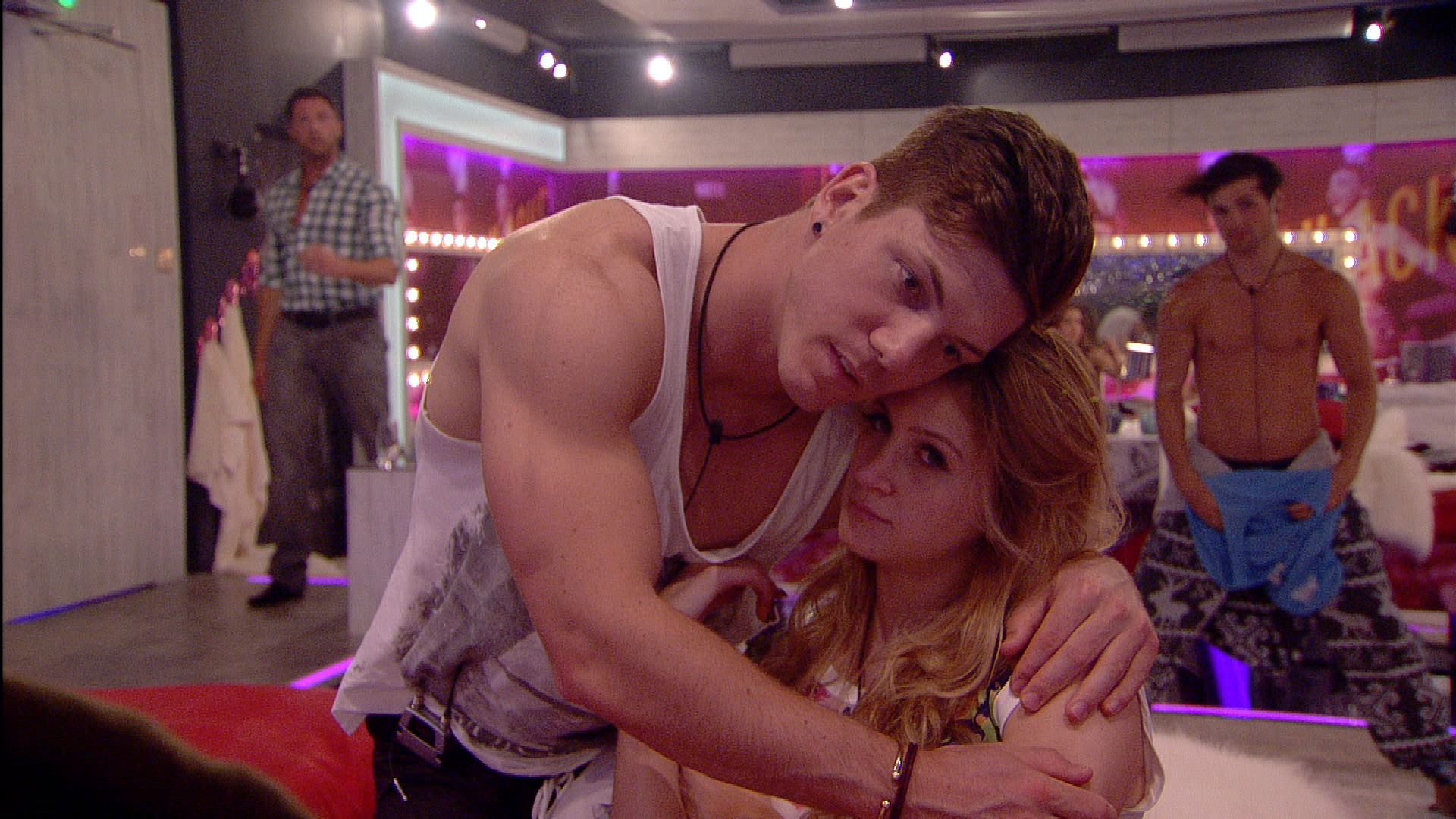 9.32am
It’s a dark and stormy morning and it’ll be the last one Victoria, Lydia or Conor will wake up to in the Big Brother house.
Last night Arron and Victoria fell out when Arron said he’d evict Victoria while playing a game of spin the bottle. Arron has come to the Diary Room to talk about Victoria.
Arron says: She just seems to sort of set herself back from everybody else and she says it’s the age gap. I’m pretty sure she’s stabbing me in the back. With all her life experience, she should be able to deal with these situations better.
Victoria talks to Lydia about the situation: I knew I was going to be in the minority but I didn’t think I was going to feel this alone. I did say yesterday that you were my only friend in here.

10:44am
Chris is in the garden talking about his female housemates and comments: There’s some beautiful girls in here but I’m not a sleaze-bag, so I’m not going to be talking to you (the girls) just because you’re gorgeous, but because I want to talk to you.
In the kitchen, Arron and Victoria are having their first chat of the day.
Arron notes: I said it’d be about two weeks before I had my first argument.
Victoria replies: It’s not that I want them either
Arron: I want to engage in happy conversation
Victoria tells him: You can’t go through your life engaging in happy convos I’m afraid, that’s not what life’s all about.
You can try, Arron responds: It’s hard to try and avoid other conversations without being rude and that’s what I don’t want to be.
Lydia interjects: I think you should get those happy conversations in for as long as possible because it’s not going to last for very long.
Arron leaves the kitchen: On that bombshell girls I’m going into this bedroom where people are being banterish.
After Arron has left, Victoria says to Lydia: And that’s what I can’t deal with, he’s playing the game, he’ll stay in front of the camera with the banter for as long as possible.
Lydia adds: Taking his clothes off all the time.
Victoria muses: You know what, I’m not being funny but it’s what the public want to see and you probably would rather I don’t know. I’m not slating the public, do they wanna see that or do they wanna see I don’t know.
Lydia tells Victoria that she likes the boys in here with a depth to them.
Victoria says: I thought he (Arron) had depth, that’s the thing.
Lydia: When you said that to me before I disagreed, I didnt understand.
Victoria: Yeah, but I bought that, that’s why I said he was one of my favourite people (to Lydia)if I get to stay are you saying I should play the game a bit more?
Lydia: Absolutely.
Victoria: Fuck man, that means being a fake person.
Lydia: Well what do you think’s going on out there?
Victoria gets frustrated: I can’t be fake, I can’t be fake. We live in a world that is mainly fake, I’ve had a few bits of plastic surgery but I cannot be fake as well. I can’t do it.
Lydia tells her: This is not real life though, this is not you being fake in real life. If you want to stay and win money for those dogs you’re going to have to do something about this behaviour.

In the bedroom Sara is opening up to Chris
Sara: Of all the guys in here, if I had to have a boyfriend it would probably be, like, you. I love a ripped body but sometimes I like a bit of a cuddle.
Chris: They (some of the other guys) have got to have their bodies to get girls, I like to use my personality. If they (girls) like my body it’s a bonus.
Chris says to Sara: We’re good friends and then they share a hug.

11:25am
Adam and Conor are working out with cans of baked beans.

In the kitchen, Ashleigh is explaining the meaning of her body-art to Luke S.
Luke S asks: Live and lust. What reasons?
Ashleigh explains: You might really love someone, like your boyfriend, but I could be having sex with you and lust you. Lust is the enemy of love. I was in love with him (ex-boyfriend) but I’m not anymore. They share a hug.
Scott and Caroline are in the bathroom talking about Arron. Scott says he is going to love Arron for the rest of his life, while Caroline suggests he’s not the brightest button in the box. They run through the house couples, Luke S and Ashleigh and talk about Chris and Sara liking each other.

2:44pm
Scott, Benedict and Arron are working out in the swimming pool.

In the bedroom, Ashleigh is helping Luke S relax as they grow closer.

Scott and Arron are in the bathroom after their pool work out.
When Arron leaves, Scott exclaims Oh My God! On returning, Arron asks how much can be seen through the frosted glass as he showers naked.

4:28pm
Conor, Arron and Lydia are talking about Scott
Arron says: He definitely wants another gay man in here. He’s got a bit of eye-candy with the straight men in here but he’s just gotta look. He’s a good kid.
Conor adds: When I first came in I thought he was gonna be a bit stuck up but he’s really good fun.

9.42pm
Housemates get ready for the first live eviction tonight.

Housemates are gathered on the sofas ready for the first eviction to take place. Brian calls the 3 people’s names up for eviction. Conor’s name is met with cheers from the crowd, Lydia receives boos and Victoria receives a mixed reaction.

Brian reveals Conor received the most public votes. He celebrates, breaking the back of the sofa by accident. Brian announces that Victoria has been evicted, she reacts saying “I knew it”.

Victoria says her goodbyes and leaves the house. Housemates give their views in the Diary Room. Arron says she’ll be remembered for the wrong reasons, while Conor and Lydia agree the right person went.

10:52pm
Lydia tells Benedict she’ll be able to empathise with people up for nomination in the future and says she’s not sensitive anymore. Chris thinks it may be a bluff and that Victoria may not have gone.

Wildcard Becky is in the Diary Room preparing to enter the house.
She says, excitedly: I can’t explain to you, I’m in complete shock.
Becky bursts through the doors, much to the amusement and shock of the other housemates. Becky heads straight to the pool, where she jumps in, fully-clothed.

11:04pm
Becky is in the Diary Room where she is set a secret mission, where she must become somebody’s favourite housemate.
On Sunday each housemate will be asked to choose their favourite housemate and at least one person must choose Becky. If they don’t she will automatically face the public vote.
Becky leaves the Diary Room and sets about her mission to charm her fellow housemates.
Becky downs drinks with housemates and talks about what food she loves. The flirting between Ashleigh and Luke S continues.

11.58pm
Shievonne and Benedict talk about Becky and what a day it’s been.

Chris is in the diary room complaining about how hungry he is. He fantasises about steak.

Becky is in the smoking area with the other housemates trying to make friends. She zones in on Adam and Scott in particular.

2.01am
Ashleigh strokes Luke S’s ear. He says it’s like stage one of a sexual experience.

Becky is getting to know housemates in the bedroom. Chris tells her to guess his job- she tells him he looks like a scrap metal dealer. Chris takes offense.

3:11am
The housemates are having a discussion about the food budget.
Things get heated between Chris and Luke S.
Chris says: There’s going to be arguments because I’m going to put my foot down. There’s no fucking way I’m eating chick pea rice and fucking lentils.
Luke S replies: You don’t like that but someone else might.
Chris: I dont care if someone else likes it, I’m not having that.
Chris says to Luke S: We’re going to really clash, you’ve got a very strong opinion on things.

3:32am
Chris continues to get wound up by the situation that has arisen with Luke S.
Luke S is waiting outside the diary room. Chris asks Luke S why he wants to go to the diary room and the argument reignites. Chris also argues with Becky when she says he needs to calm down. He says that she can’t judge him because she’s only known him an hour, and that he took offence to her guessing that he was a scrap metal dealer. Luke enters the diary room and talks about the row.

4.02am
Chris and Luke talk through their disagreement in the bathroom, with Chris claiming they are both alpha males. They resolve the argument with a hug.

4.44am
Chris talks things through with Shievonne. He is worried the housemates are now against him. She tells him to “keep it cute and keep it mute.” He says he will resolve things with Becky tomorrow. Chris wanders around the kitchen alone talking to himself; he describes the housemates as ‘cannibals’ and goes to bed.