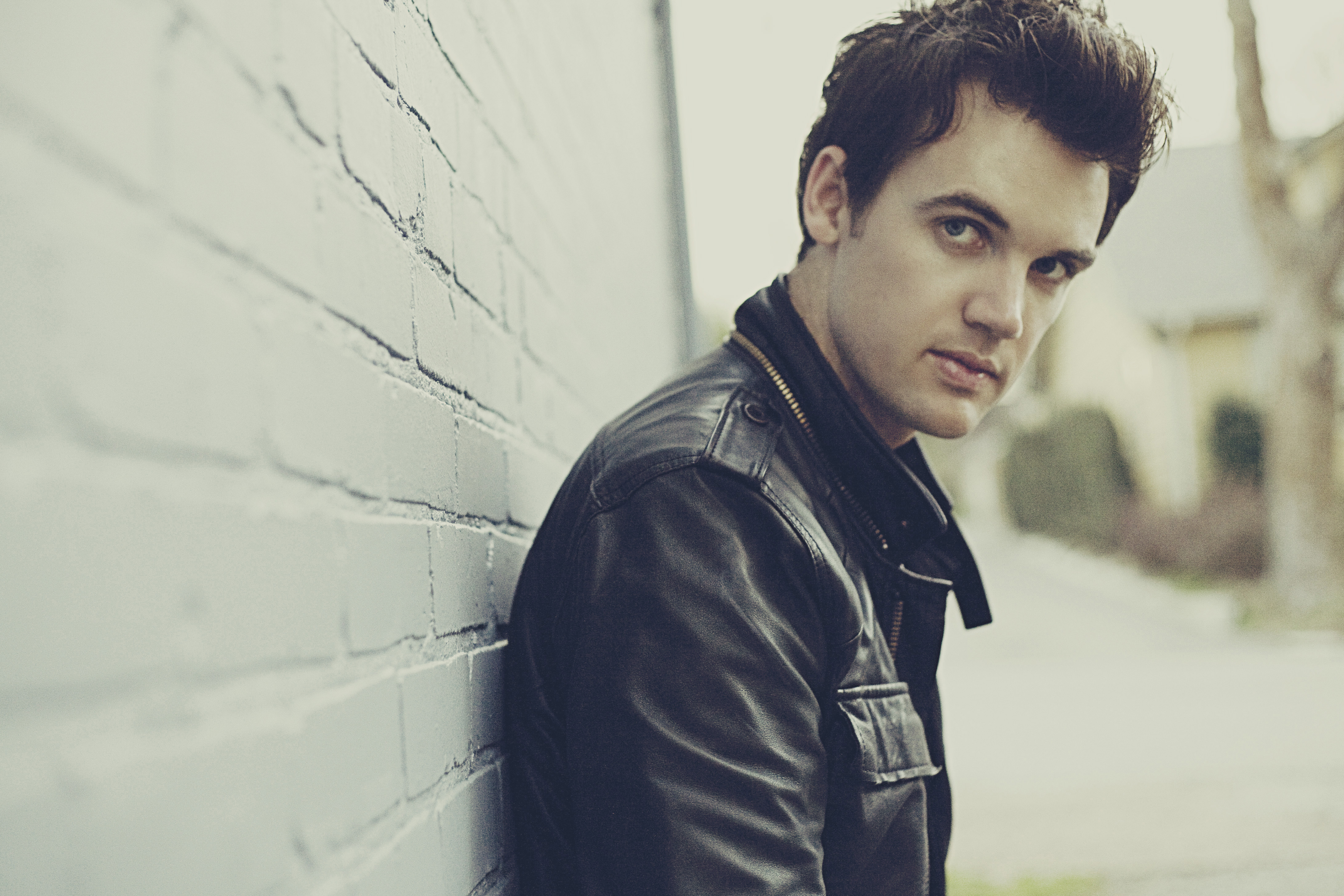 Every once in a while you get to see an artist that reminds you why it all started. Why you’re doing what you do. The reason Flecking Records came together all those years ago was the music. Nothing more, nothing less, just the music. This evening I was lucky enough to be invited to see such an artist.

Singer/songwriter Tyler Hilton is currently touring the UK as one of two support acts for internet sensations Boyce Avenue. Just one man and his guitar, but boy can he play.

As he took to the stage the crowd still needed a little warming up, however Tyler is a veteran in his craft and knows exactly what he’s doing on a stage. Sure enough two songs and a bit of banter later and even the beefy looking guy towering over us was bopping along and ready for a great night of live music.

This was my first time seeing Tyler live and as expected his unique sound and vocals were absolutely flawless. Having penned his own material since the age of seventeen every word seemed to be delivered with meaning and a sense of pride many musicians seem to have lost these days. The entire set was beautiful from start to finish – although a little too short!

The crowd were treated to a fantastic mix of songs from Hilton’s latest album “Forget the storm” including favourites such as “Kicking My Heals” and “Prince of Nothing Charming”, which was dedicated to his beautiful girlfriend Megan Park who is sadly back home in the US. A treat for the One Tree Hill fans in the crowd, (who were a pleasure to hear!) came in the form of Chris Keller’s cover of “Missing You” and original song “Loaded Gun”.

All too soon Tyler had finished his set and left the stage to roaring cheers from the sold out crowd in Bristol. I was lucky enough to meet up with Tyler for a chat back in his dressing room, we even had time to do a little doodle in the ‘Flecking Records – Wreck This Journal’.

We’re fantastic thanks, great show
You’re here on your first UK tour. How are you finding our wonderful country so far?
Yeah, it’s great, I love it here!

Bet you’re loving the weather?!
It’s been pretty shitty so far but today has been beautiful, so beautiful.

We see that you’ve been brave enough to try a few local delicacies! How did you find the ‘Irish Pudding’?
[Face palms!] Ah did you see that on Twitter?! [Shudders] Naaa! I didn’t try THAT!

No, we’ve never been brave enough either [the entire room shudders!] But you’ve discovered the wonderful Nandos, so it’s not all bad!
Nandos is awesome.

So you’re here supporting the wonderful Boyce Avenue, any plans to come back with your own headline tour? 30 minutes ‘Tyler Time’ just isn’t enough for anyone!
Yeah, I was just talking about this yesterday. I think I’m gonna try and come back in October.

We love your latest album “Forget The Storm”, tell us a little about it.
Well, it’s a record I was wanting to put out for a long time. I was having trouble putting it out on a label so I just kinda left and started my own label and put it out. I’m really proud of it! It feels like it’s totally MY album.

Great title by the way. Love it. How did it come about?
Well, because the other record I was going to put out was called “The Storms We Share” and then I couldn’t put it out because I left the record company. So when it came to this one, a brand new record, I decided to call it “Forget The Storm” because it felt like forgetting that whole part of my life and that record and just putting it all to bed and starting over.

What’s your favourite track on the album?
I don’t know, I think it’s “Loaded Gun”, I’m REALLY proud of that one because it’s really different, it’s something I’ve been wanting to do for a while, so yeah, “Loaded Gun”!

Live performances are very different to studio time. What’s your favourite track to perform live?
I really like “You’ll Ask For Me” acoustic. I love doing that one.

Are you working on anything new at the moment?
No, just touring. My goal now is to just tour as much as I can for a couple years on this record. It’s been so long since I’ve done it. I’m working on coming back through here, doing a European tour; I really wanna do Australia, Asia – which I’ve never done. That’s really my main focus now is just getting out there and just playing.

So, is that the plan for the rest of 2012?
Yeah, I’m taking a couple of small vacations in Europe in August. Y’know come back here for a little bit, then France, then go to Hawaii for a little bit and the rest of the year is gonna be touring around non-stop.

We have to talk  about One Tree Hill a teeny bit…
Let’s do it!
We absolutely loved the show and of course Chris Keller, he may be a bit of a d*ck but he’s totally awesome.
[Tyler laughs loudly]
But what we really want to know is who gets the most female attention, Tyler or Chris Keller?!
Oh Tyler! Chris doesn’t get any female attention! They all seem to hate him!
We don’t! We’re still heartbroken that we’ve seen the last of Chris Keller though.

Maybe we should move on to something a little less heart breaking! We’re told everyone has one! So Tyler Hilton, what’s your party trick?
Party Trick! Hmm, well I can juggle! [looks rather proud of himself] I was actually only talking to Alex Goot about this yesterday. My random talent is that I can juggle!

We saw in a recent interview that you love it when fans post pictures on Twitter but is there anything that’s been posted that you wish you hadn’t seen?
Oh yeah! I see pictures sometimes that I didn’t know were being taken. Like times when I’m out in public and I see pictures of me eating and I’m like “Whaaaat?!” It’s kinda weird!

We did a little Facebook stalking and saw a lot of fans asking for your wisdom and advice with regard to the business. What advice would you give someone hoping to enter the business?
Well I’ve always felt you should start at the bottom and figure out what you like to do. Unless you want to be a musician and then I think you should just play. I don’t think people play enough. Y’know just play a lot, play as often as you can. You’re probably not good enough yet, but I do that too. I know I’m not so good that I don’t have to play all the time.

Ok, so we wanted to see how much ‘British lingo’ you’ve picked up on your travels. We hope you paid attention walking around Bristol today as we’ve thrown in a little ‘West Country lingo’ as well!
[snaps fingers] OK! I Think I’ve been getting this down! Try me!
OK! Guff…
Guff?! Err… Guff is when you sneeze and cough at the same time. [Tyler is oozing confidence at this point!]
To guff is to fart.
F*ck! Oh sh*t sorry! Guff is when you fart?!

What about cock up?
Oh, cock up! Pah! I think it’s very self-explanatory! It’s obviously a Rooster fight! I would think!
Erm. It’s when you screw something up.
Screw something up when you “cock up”? Are you just making these up as you go along?! [laughs]

Thank you Tyler, we think you’re gertlushmazin’!
That I’m WHAT?!
Gertlushmazin’!
Whaaaat?! What’s that?!
It’s gertlushmazin’! It’s local lingo! Clearly you weren’t paying attention!
Lush ‘mazing?
Gert. Lush. mazin’.
[shakes head] Do you guys speak English here? [laughs loudly] Gerlushmazing.
No, gert.
Gert… Gertlushmazing.
Yay! Close enough!!
1 out of 4, but you can now say ‘Gertlushmazin’’ pretty well so we’ll give you a bonus point for that.
Final score 2 out of 4. Not bad at all.

To see Tyler’s contribution to our “Wreck This Journal” and a few snaps from the show check out our Tyler Hilton Gallery here – and the boy said he couldn’t draw!

Tyler’s latest album ‘Forget the Storm’ is available now from iTunes or by popping over to his official website where you can also chuckle at his tour blog and keep your eye on the events section for news of his October headline tour.