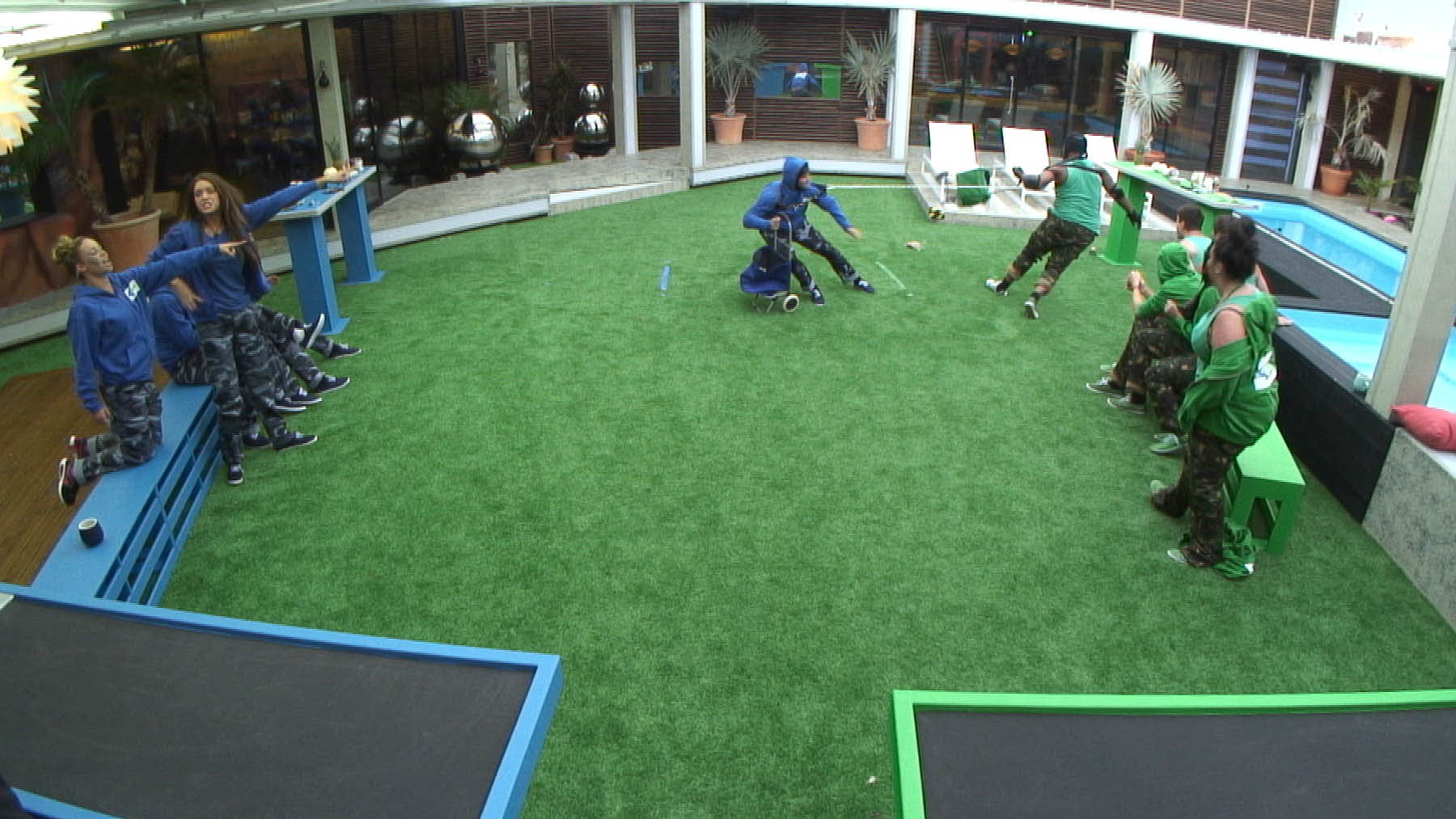 Day 28 in the Big Brother house…

It’s week four in the Big Brother house, so far four housemates have been evicted. Today the group will decide who will face the next public vote.

Adam, Luke A and Lauren are in the garden. Luke A comments, ‘See Arron doing the washing up…I feel sorry for him, genuinely underneath it all he’s alright.’ They speculate on how many people will be up this week. Lauren says, ‘I would rather everybody go up this week.’ Adam thinks three housemates will be up for nomination.

Becky is talking to Shievonne, ‘There’s a lot of waiting around that comes with these nom noms.’ Shievonne says, ‘I just want to get it over and done with.’

Luke S is the first housemate to nominate. His first choice is Deana and his second is choice Lauren.

Scott is applying hair product in the living area, prior to nominating. Luke S asks if the volumising powder works.

Scott is next to nominate, he tries to think about what to say. His first nomination is Conor then Luke S.

Shievonne is up next and picks Becky, her second choice being Luke A.

Sara first nominates Conor. Big Brother then reveals to Sara that Conor and Arron weren’t told to take Scott’s precious statue. The brunette is shocked, then thanks Big Brother and says that she definitely knows who to nominate second now, Arron. She’s annoyed, ‘F***ing b**tards!’

Caroline is playing around with different hairstyles in the bedroom. Scott says, ‘You look like an aristocrat.’ Sara adds, ‘I really like your fringe.’

Some of the boys are in the living area remembering in which order the housemates entered the house. Adam comments on Ashleigh’s photo, ‘Ashleigh’s never looked like she has when she first came in here since she’s been here.’ Luke S stays silent.

Ashleigh is in the bedroom putting make-up on. Sara asks if she and Luke S have done anything in the house. Ashleigh smiles, ‘It’s hard but we’ve tried. We’ll get there then someone will look.’ Sara continues to quiz her, Ashleigh continues, ‘He’s touched me. I don’t give a f**k what people say; we’re in a relationship, in here 24/7 and share a bed. It’s hard to keep your hands off each other.’

In the kitchen, Caroline, Ashleigh and Conor are talking about Lauren. Ashleigh says, ‘Everything comes out over exaggerated.’ They start mimicking her, Conor laughs.

Caroline says, ‘I have given her every chance in the world to be a normal, nice human being.’ Ashleigh adds, ‘She’s lovely, sometimes she’s really nice.’ Caroline switches her conversation to Adam, ‘I find Adam gets really rude to Becky, he’s tactless and rude with Becky.’ Conor thinks he’s very ‘tactile’, meaning he has tactics. Caroline explains that they are two completely different words. The housemates laugh. Luke S chuckles, ‘Alright you with your f***ing grammar!’ Caroline reverts back to Adam and concludes, ‘I hate competiveness.’

Adam is in the diary room and nominates Caroline then Arron.

Deana is up next to nominate and picks Arron, labelling him ‘Conor’s little lap dog’. Becky is her second nomination.

Conor enters the diary room to nominate Deana, then Becky. He calls them both stirrers.

Caroline nominates Lauren then Adam, who she only decided to nominate in the last minute.

Becky is giving Ashleigh a masculine makeover. She draws a moustache and gives her thicker eyebrows. Ashleigh announces, ‘I’m going to give nominations looking like this!’

Sara and Scott are in the bathroom discussing Arron and Conor’s prank taking Scott’s statue. Sara reveals to Scott that Big Brother didn’t ask them to take it. Scott reacts, ‘I’m not going to play up…I’ll say something at some point.’ Sara adds, ‘I was generally really angry.’ Scott adds, ‘They don’t want me to have any kind of personality.’ Sara reassures him that he must come and speak to her if he gets upset.

Ashleigh is keen to show her boyfriend her new masculine look. Conor screams, ‘You do look like a man!’ Luke S says, ‘I won’t kiss you like that.’ Ashleigh is disappointed.

Luke A is called to nominate. He picks Luke S then Conor.

Ashleigh, looking like a man nominates Deana and Lauren.

It’s then Becky’s turn to nominate and she picks Arron and Conor.

Arron is the final housemate to nominate, with no hesitation he chooses Deana and Becky.

The results are in: Arron received five nominations; Conor, Becky and Deana received four each. These four housemates will face the public vote.

The time has come for Big Brother to reveal which housemates are up for the public vote. Deana’s name is announced first. When Arron’s name is called out, Deana shows a sneaky smile. Housemates are most shocked at hearing Conor’s name. It seems that both Arron and Conor take the news badly and leave the living area. Caroline mutters, ‘What the f**k?’

Scott reveals, ‘I knew it would be an odd one.’ Housemates comfort Deana and Becky. Lauren says, ‘I’m really shocked at Conor.’

In the bedroom Arron says, ‘That’s why a whole group of people haven’t spoken to me all day.’ Conor replies, ‘Exactly. We’re not f***ing weirdos. I’m not f***ing worried.’ Arron announces, ‘As long as he (Conor) stays in I’m good!’

Conor says that he will no longer speak to Becky, Scott and Sara.
In the living area Becky says,’ I’ve just got a feeling. If it’s double eviction I will definitely be going.’ Scott adds, ‘Some people have brought it on themselves.’

Conor and Arron continue to vent their views. Arron admits, ‘My own friends nominated me…some f***ing friends they are. It’s time to cause some s**t.’

Ashleigh sighs, ‘This is going to be one f**ked up week.’ Luke S adds, ‘You can’t think negative about the situation.’

Lauren comes to hug Conor and Arron and says how shocked she is. Luke S offers some support, ‘Don’t spend the week being negative Arron.’ He replies, ‘I’m going to spend the week f**king s**t up.’

Arron is in the bedroom, ‘F**king two faced b**tards!’ He then sneakily pours a glass of water into Becky’s bed.

Conor comes to talk to Big Brother. ‘I think people are intimidated by me and Arron. They are afraid, they are scared. I can read people.’ He goes onto to say that Sara sleeps all day, Becky is the biggest actress he’s ever met and that he doesn’t get on with Deana. He adds, ‘Scott…I don’t think he’s even human. Caroline doesn’t want us to go. I’m not going to change who I’ll be…I’ll stir some s**t up.’

Sara and Caroline are talking about the tensions in the house. Caroline says, ‘Don’t get angry with me, I feel like you don’t appreciate that I’m friends with Arron and Conor.’ Sara snaps back, ‘Why would you think that? I don’t understand why you would ever come out with anything as ridiculous as that. Load of rubbish.’ Caroline explains that Scott thinks that and thought Sara would feel the same way. Sara isn’t impressed.

Some of the housemates are in the pool.

Caroline tells Ashleigh that Sara just snapped at her and that she thinks Sara are Scott are being insensitive and don’t like her friendship with Conor.

Arron is in the diary room talking to Big Brother how he feels about being nominated.

Sara asks Arron if she can have one of the two beers that are sitting on the coffee table. Arron says, ‘I was going to drink them right now. I would like to drink them both.’ Sara replies, ‘OK, drink them if you want.’
He bites back, ‘Actually, I was going to pour them down the drain, just take them.’ Scott pipes up, ‘Why would you suddenly start to drink them when Sara was going to take them?’ Arron tells Scott to shut up. Scott reacts, ‘No you shut up. I don’t want to hear your voice.’

The arguments are getting to Caroline and is seen crying in the toilet.

Scott is still fuming about Arron’s threat to pour the beers down the drain. Caroline joins Scott and he quietly starts to inform her about what just happened. Caroline replies loudly, ‘Everyone deserves the same amount of alcohol.’

Scott snaps back, ‘Why are you saying it so loud, are you stupid?’ Arron shouts, ‘Stop getting her involved!’

Scott states that he doesn’t even like Arron. Caroline looks really uncomfortable, ‘I want to go into a big hole and die.’

Caroline is talking to Ashleigh about Scott, ‘He gets so touchy with me. You and Luke (S) are the only two people I can be around.’

Scott is letting off steam in the bathroom. ‘Arron’s a right c**ky sh*t!’

Sara confronts Conor about the cans of lager. He tells her, ‘They have gone.’ Ashleigh defends him by saying he gave one can to her and offers to share the beer with Sara. The female model explains, ‘I just don’t appreciate people pouring fine things down the sink, it’s like throwing food away in the bin.’

Arron and Scott start bickering again. Scott announces, ‘There’s something wrong with your mind Arron!’ He replies, ‘Scott, you can insult me as much as you like.’ He goes onto add that Scott is putting Caroline in an uncomfortable position. The red head snaps back, ‘What a load of s**t, trying to put it on me. Shut the F**ck up!’

Caroline escapes to the bedroom in tears. Luke S comforts her in bed. She says, ‘I feel awful, so uncomfortable. I can’t talk to anyone except to you and Ashleigh. What am I supposed to do?’

Nominated housemates Conor and Arron are feeling the effectives of a stressful day. Conor states, ‘I don’t give a f**k, I just want to go home.’

Four hours ago Arron poured water into Becky’s bed. Becky discovers her wet bed and says to some fellow housemates that it’s like someone has poured water in her bed.

Deana goes to the diary room to talk to Big Brother. ‘It’s been an eventful day today. It’s not looking good for me as I’m up against three of the biggest characters in the house.’ The beauty queen continues, ‘Tonight, we are finally seeing the true colours of Arron and Conor which I’ve been saying all along. I’m happy anyway, people are finally seeing.’

Lauren, Adam and Luke A are chatting in the smoking area. Luke A announces, ‘So we’re half way through! That was the first time I proper [email protected] myself.’ He adds, ‘Technically we don’t have to do anything, they are doing it all themselves.’ Lauren and Adam agree.