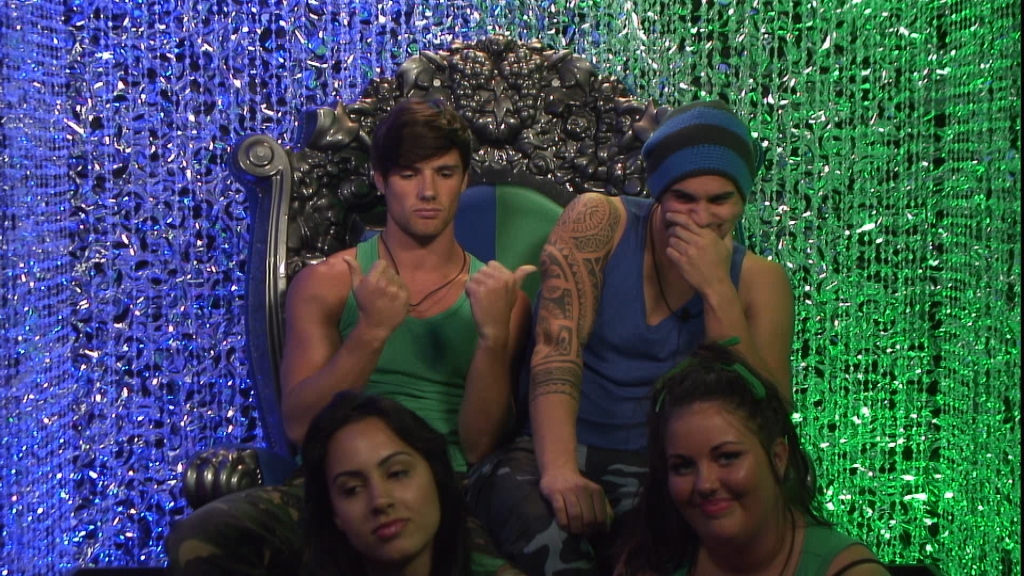 Day 31 in the Big Brother house…

10.21am
Two days ago housemates were split into two teams, each competing to win areas of the Big Brother house. The Green team have won the kitchen and all the food, the bathroom and bedroom. The Blue team have won access to the living area, however they are sleeping rough on the floor of the large task room and their basic food is rationed. Today’s Turf Wars will see them fight for the garden, pool and hot tub. A hard night of sleeping on the floor has left some members of the Blue team demoralised. Luke A jokes to Conor, ‘Go Blue team…’ The Irish man replies, ‘The Blue team is f**ked.’ Luke A agrees, ‘Some people in here can’t be arsed at all. We need to pull together.’ Conor nods.

A disgruntled Shievonne goes to talk to Big Brother about being on the losing team. ‘Waking up in there was hell. Why am I on the floor? You just realise: oh my god we’re losers!’ She continues, ‘We don’t have any food. It’s like the worse week of my life. We won’t survive Big Brother.’
In the bedroom, Deana admits, ‘I’m a 100% sure I’m leaving tomorrow. 100%.’ Becky disagrees, ‘Don’t be stupid, you do not have a clue.’ Adam agrees with her. She adds, ‘Something I might have done, people may have been absolutely appalled at. Same as Arron and Conor. The public love eye candy.’

1.56pm
Big Brother calls all of the four nominated housemates to the diary room and starts to quiz them for Big Brother’s Bit On The Side. Conor is asked why he thinks his housemates nominated him. He replies, ‘‘Cos they are threatened by me, think I’m some sort of super hero that I can’t be touched. Threatened by me and him (Arron).’ Becky pipes up and says maybe it’s because he’s being nasty. In a sarcastic tone Conor says, ‘Yes, yes.’
Deana and Conor start bickering; with her saying they are horrible guys. Deana is then asked which housemate she would most like to evict. She replies, ‘Conor because he’s been horrible to me from the day when I put him up for eviction and he’s never gotten over it.’ Arron is asked how he would cope if Conor is evicted. He replies, ‘Gutted, as I will have to live with one of these two (Deana and Becky).’ The girls comment on when Arron is around Conor, he becomes a completely different person and call him a nasty bugger.
3.21pm
Becky and Deana confide in Scott about the diary room conversation. Conor claims he doesn’t care if Deana is upset and offended but Arron heads to the bedroom to confront the girls.
He starts, ‘I think we should have a chat, all three of us.’ Becky agrees. He continues, ‘Here’s my theory, before you (Becky) came in the house me and Scott got on perfectly fine, minute you came in it was all change.’ Scott hears this and defends Becky by saying he hasn’t been influenced by anyone in the house. Becky argues, ‘You were bitching about me behind my back, saying to people don’t listen to Becs.’ Arron replies, ‘I said it in front of you. You speak about the same s**t everyday, what gives you the right for you to be rude to me?’
Deana adds, ‘You’re rude everyday, when Conor is around you are nasty to me for no reason.’ Arron argues back, ‘Me and you don’t get on. I look at you sometimes and feel sorry for you as you’re not having fun. You and me just don’t get a long.’ He continues, ‘I’m often offended by you (Becky). You’ve laughed in my face on a number of occasions and I don’t like it.’
Becky laughs, ‘Right OK.’ The bickering continues.
The male model says, ‘Some people take my jokey mood or my wind up mood way too far. Becky laughs, ‘YOU take jokes way too far!’ The argument heats up. Deana concludes, ‘We are not going to get anywhere.’ Arron walks away, ‘If that’s the case then whatever. You can be as angry as you (Becky) f**king like.’ Becky and Arron leave the bedroom and Deana is left upset alone in the bedroom.
6.02pm
The next Turf Wars tussle for territory will see the housemates competing to win control of the outside areas. Donning tight, team colours swimwear; the housemates gather around the pool, ready to play Bail Out. Each team will put a pair into leaky boats; at the sound of the claxon they will start bailing water as fast as they can. When a team sinks they lose. It’s the best of three rounds. The first team to win two rounds will take exclusive control of the outside areas.

Round one sees Luke S and Deana go boat to boat with Luke A and Lauren. All housemates cheer their fellow team members on! The Blues win the round and take an early lead. Round two shows Arron and Scott defeat Shievonne and Ashleigh to keep the Green team afloat…that victory for the Green team makes it all square going into the final round.
The control of the outside areas awaits the winners. It’s Conor and Sara for the Blues, against Becky and Adam for the Greens. It seems that Conor and Sara put the most effort in and the pair is crowned winners. Caroline chants, ‘We are the champions!’
Big Brother reveals the Blue team are the winners and Green team are now banned from the garden, pool and hot tub. They cheer! The Greens don’t seem too fussed, and Deana suggests a pizza dinner to her teammates.

10.21pm
The Blue team are enjoying the outside area. If the Green team want a cigarette they can only smoke on the lone smoking stool in the garden.
Conor comes to the garden laughing, dressed in a swimsuit. Becky and Scott look on from the bathroom. Scott says, ‘Stop pretending to have fun.’ Becky adds, ‘I don’t have a clue why he’s wearing that…so he can get more votes?!’
Suddenly, Green team prankster Arron jumps fully clothed into the Blue team’s pool. Becky reacts, ‘What an absolute d**k.’ Deana adds, ‘We are going to get punished now.’
From the pool Arron shouts, ‘Sorry boys but last night in the house!’
Luke S looks on. ‘If our food goes I’ll go f**king bananas.’ Caroline shouts, ‘I love Arron so much!’
The rule-breaker leaves the pool, takes his green t-shirt off and hoists it up the Blue team’s garden flag. ‘F**k it. It’s my last night. Had to be done.’ He then jumps back in the pool.
11.46pm
Big Brother gathers housemates to the sofas but one of the housemates is playing by his own rules. Arron is in the garden and writes on his chest with some make-up ‘F**k u BB’.
Shievonne encourages him to join them all on the sofas. Arron shouts, ‘Go on Big Brother, dish out your f**king punishment.’ Big Brother announces that as Arron invaded the Blue team’s territory there will be severe consequences for his actions and the housemates will learn about the punishment in due course.
Arron gets up and ‘Hulk’ rips off his green t-shirt to reveal his chest. Some of the housemates cheer. He then goes to talk to Big Brother in the diary room, snapping a Blue team flag on his way.
In the diary room the male model strips down to his shorts. ‘Your f**king show is annoying the s**t out of me as your housemates are f**king pussies.

I’m angry as f**k.’ He continues to vent, ‘The characters are winding me up, I’ve tried to be their friend from day one. It’s always me trying. I don’t want to be on this team anymore.’ Arron adds, ‘I can’t stand Deana, I don’t like being in the same room as her. Becs and Scott just wind me up, doing my head. I just want to have fun.’ The prankster concludes, ’Do whatever you want with me as I can’t handle it.’
Arron explains to Big Brother that he just wanted to have fun as he may be evicted soon. Big Brother tells him to calm his behaviour down and he wipes the writing off his chest with his damp trouser leg.