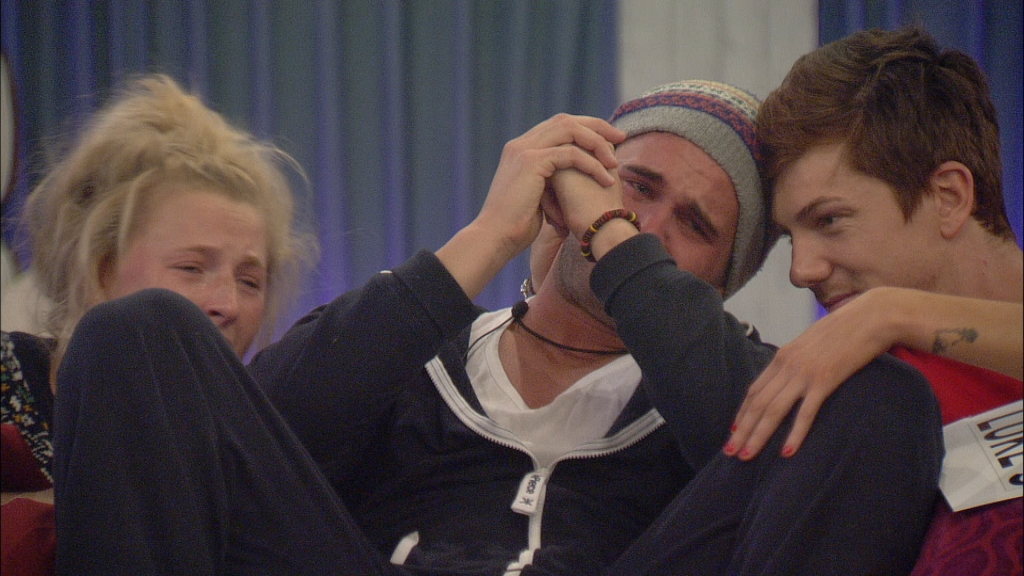 Day 47 in the Big Brother house…

9.44am
For the past six weeks and four days housemates haven’t communicated with their friends or family, but today that could all change. Big Brother delivers a letter to the house which Luke S reads to his housemates. The letter contains details about the new task, Letter Delivery Dilemmas. Luke S explains that if the housemates behave selflessly in a series of dilemmas, letters from friends and family will be delivered to the house.
After hearing these details all housemates cheer with excitement. Becky quips, ‘I need it so bad!’ Ashleigh asks what selflessly means. All housemates start talking about who might have written their letters.
Luke A is in the diary room talking to Big Brother. ‘It would be out of this world to get a letter. There are so many selfish people in here; it’s going to be a hard task for some people.’
In the bedroom, Becky is chatting to Sara about her argument with Luke A. ‘I know exactly how he feels now. I just don’t want to talk to him. There’s no point forcing someone to like you.’
In the diary room, Luke A continues, ‘She’s choosing her friendships and enemies wisely. I think one of the reasons she flew off the handle is because the truth hurts. I felt betrayed but of course Ashleigh is going to tell her.’

11.59am
Big Brother gathers the housemates on the sofa and begins to set each housemate a dilemma. The only way all housemates are guaranteed to receive a letter, is if all housemates pass the task.

Luke S is up first. Big Brother asks him to pour the entire contents of his protein powder into the vat of stinking gunge which is set up in the garden, in order to receive one letter for the house. He accepts and acts straightaway.
Big Brother asks Sara to permanently give up her planned eviction night outfit and wear an outfit that Big Brother will now provide her for the rest of the day. She takes her eviction dress to the diary room where Big Brother reveals that she will now dress like the Queen, wig-and-all, for the rest of the day. Big Brother thinks she is a right Royal treat! The model loves her outfit!

1.28pm
Conor faces the next dilemma. He is asked to wear a gag and stay silent for the next four hours. He is willing and ties a gag over his mouth. Adam laughs, ‘Say goodbye Conor!’
Scott’s dilemma is to talk like a typical resident from his hometown of Macclesfield. He agrees and blurts out, ‘Beans on toast with cheese on top!’
In order to win a letter for the house, Luke A is asked not to smoke or enter the smoking area, whilst carrying extra supplies of cigarettes and tobacco. He groans but accepts. Ashleigh tells him, ‘If you do it, I will give you one cigarette after!’
Ashleigh is up next. Big Brother thinks she has a potty mouth and bans her from swearing for the rest of the day. Luke S quips, ‘Big Brother’s not wrong there! Just don’t speak!’ She moans, ‘It’s going to be really hard.’ Luke S adds, ‘This is a good thing for you!’ The Essex girl replies, ‘I just don’t want to f**k up on this.’ Housemates laugh!

5.04pm
It’s Becky and Adam’s turn to face a dilemma. Becky must ride an exercise bike for the next 60 minutes and Adam must patrol the pool in a boat until further notice. The duo gets to work.
Scott comes to the diary room. In his task accent he tells Big Brother, ‘The mood in the house is a right sh*thole. I don’t really like it as people are so bloody tense all the time. I can’t be doing with it.’
He continues, ‘Everyone’s like Ashleigh, Ashleigh, Ashleigh as everyone’s terrified of her swearing.’
Whilst peddling, Luke S tells Becky, ‘600 calories already’ She replies, ‘I’ll never go on one of these ever again in my life.’ Caroline watches Becky from the grass.

5.36pm
Things are getting heated in the kitchen. Luke S is cooking a meal for the house however Ashleigh is complaining that he hasn’t used mince in the chilli he’s cooking. ‘I offer to cook you food all the time and you turn your nose up at it!’ She replies, ‘I’m not eating it.’ He takes offence to her comments and the couple start to bicker.
Becky asks for motivation! ‘Scott will you feed me? Cos’ I need the calories.’ Scott replies, ‘Aye.’ He begins to hand feed her cereal.
In the kitchen, the couple continue to bicker. Luke S snaps, ‘I’m offering to cook you some food, all you have to do is say yes or no.’ Ashleigh leaves and goes to let off steam to Scott and Becky, ‘I’m not eating it!’
Back in the living area, Ashleigh explains to Luke S, ‘I like chilli. My original thinking of chilli is mince.’ He snaps, ‘What I won’t do now is cook for you, it’s not my fault I didn’t know your interpretation of chilli.’
She replies, ‘Nothing against you, you can have it.’ He adds, ‘I will be having it, don’t worry.’ The Essex girl on a swear ban concludes, ‘So lucky I haven’t sworn yet.’
Scott and Becky watch on, he says, ‘They are not well suited.’
Caroline laughs, ‘Best argument ever!’ The couple are not impressed.
6.28pm
Deana and Caroline are next to receive their dilemmas. Deana is asked to remove her make up and hand over all her make up to Big Brother in order to win a letter for the house. She agrees and goes to bedroom to collect her make up. ‘Oh I can’t do it.’ The beauty queen then removes her make up in front of her housemates and successfully wins a letter. All cheer!
Caroline is faced with her fishy dilemma. If she eats one fish eye she will receive one letter for the house. She is disappointed, ‘Oh my god.’ Housemates support her; she turns hysterical and screams. After much persuasion, Caroline succeeds.
8.07pm
Ashleigh is a little down. Sara asks her is she’s ok. She replies, ‘He cooked that thing and I didn’t like it. And he was like I’m never happy with what he does.’ The model advises her to talk to him. Ashleigh concludes, ‘This is why I don’t get into arguments, I’m such a bitch.’
Luke A and Becky are finally talking about their argument. Becky confirms that she will be civil, and he says likewise. She continues, ‘I just wanted the world to swallow me up, I felt belittled.’ Luke A defends himself, ‘I said one sentence about you, I’ve done nothing else. You have made me feel horrible.’

He explains that one week they were fine and then the next she started acting all weird, ‘How weird was it when you said morning evictee?’ Becky tells him, ‘You are being really sensitive…I never know what you’re thinking.’ He quips, ‘Just ask me! I think you’re funny as f**k. I’ve got nothing to hide.’
She apologises, ‘I’m sorry Luke, I really am.’ He also apologises. She adds, ‘You don’t need to be sorry, just forget it.’ The pair hug.
8.35pm
In the bedroom, Becky tells some housemates about the chat she just had with Luke A. ‘So embarrassing, I hate having to explain myself.’ Conor adds, ‘You shouldn’t have to.’
A guilty Ashleigh apologises to Luke S for saying his food was disgusting and tells him she does appreciate him. They kiss and make up. ‘I’m sorry, I feel really bad.’
9.01pm
Big Brother announces that housemates succeeded in the task except for Ashleigh who failed to control her potty mouth. She swore 59 seconds into the task, and as a result, has lost one letter for the house. Adam says, ‘I really don’t care.’ Ashleigh seems upset.
A post box is delivered to the house which contains ten letters – one for each housemate. As Ashleigh failed her task, she won’t get to pull a letter out of the post box, and one random Housemate’s letter will stay in the post box, and one random housemate will miss out.
Luke S is up first and selects his own letter at random. He starts reading his letter from his family but chokes up and has to let Conor take over.
Sara then is asked to pick a letter; she randomly selects a letter for Conor from his mum and reads it out. Conor starts to cry.
Scott then randomly picks out a letter for Sara from her best friend Kirsty. She cries, ‘OH MY GOD!’ Conor is up next and selects a humours letter from Caroline’s family. She laughs, ‘Most random letter!’
Luke A then randomly picks a letter for Ashleigh. She quips, ‘I don’t want it. Now someone else hasn’t got a letter.’ Luke A ignores her and reads the letter which is a song from her family.
Becky chooses a letter for Scott from his family; then Adam randomly selects a letter from his mum which he asks Deana to read. This upsets him.
Deana selects a letter from Becky’s family which makes her cry.

Deana and Luke A are left but only one of them will receive their letter from home. Caroline randomly selects a letter from Luke A’s wife. Deana is clearly upset that she didn’t get a letter. A guilty Ashleigh says, ‘Deana I am so sorry.’ Her friends console her.
10.23pm
Conor says, ‘I feel so sorry for Deana’
Luke A and Adam are talking about Deana. The chef says, ‘I feel so sorry for her. I didn’t know how emotional people can get.’
Deana is alone upset in the toilet. She vacates the toilet; Luke A and Adam are waiting to comfort her. They tell her they appreciate and respect her; she thanks them.
Ashleigh is alone and upset in the bathroom. Deana is crying in her bed.
Deana then goes to talk to Big Brother. ‘I’m fine, nothing to talk about. Obviously I’m a bit upset; it would have been nice to hear something from my mum. Ashleigh didn’t do it on purpose. I’m being silly.’
Luke S sees Ashleigh upset in the bathroom and tries to comfort her. She tells him, ‘I just want to be on my own.’
After some time, a guilty Ashleigh apologises to Deana again. The beauty queen confirms, ‘I’m fine with it, it’s not your fault, I’ve broken the rules before!’ They hug and agree to no more crying.