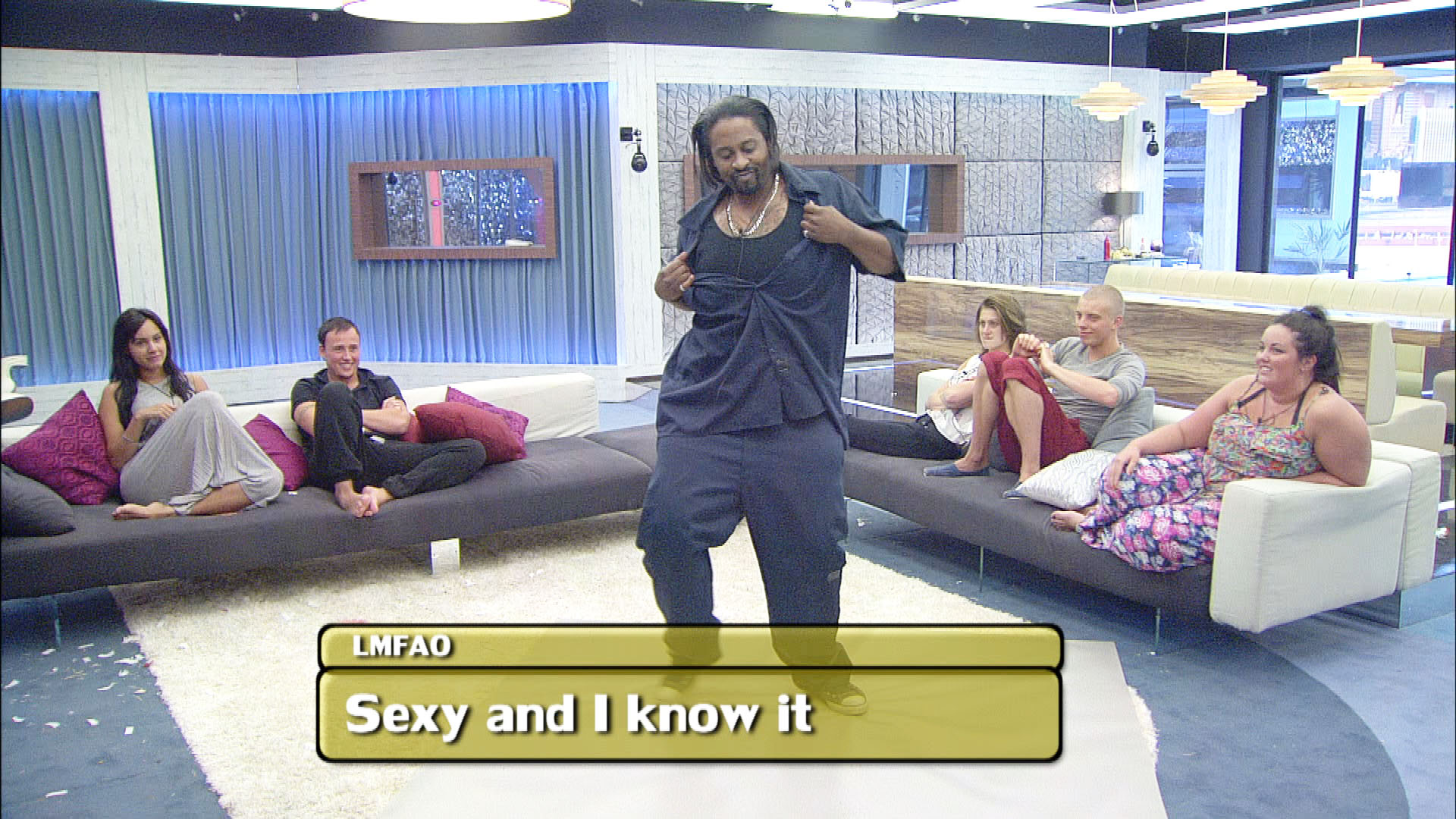 Day 58 in the Big Brother house…

9.59am
Housemates living in the White Room are playing for a pass to the final but it’s not an easy ride, as Luke S, Conor and Sara must wear only white clothes and only eat white food. Big Brother announces that the White Room corridor is open for the next fifteen minutes for the three housemates to shower. Sara screams when she finds out that the shower is cold, ‘This is torture!’
In the main house bedroom, Becky moans to Ashleigh from her bed, ‘I don’t see the point in getting up. Driving me mad, I’m losing the plot!’
Sara is struggling in the White Room. ‘My body is the colour of someone who has been in Spain for 20 years and my face is like a newborn baby’s…do they really think I can walk around like this?’ The boys laugh. Sara rings Big Brother on the room’s telephone, ‘I can’t walk about like this all day, can I get some make up? I want to leave the room. I can’t shower; my hair is a mess, no nail files for me to file my nails. I can’t stay here.’
Becky goes to the diary room. ‘I feel like sh*t. I think I’ve gone mad! I don’t know what’s up with me. I just want to walk.’ She goes onto say that she misses her three housemates that are in the White Room. Becky starts to get upset, ‘I’ve just gone.’
11.35am
This week, housemates failed their shopping task so have an economy shopping budget of £180. Luke A and Adam get to work on the shopping list. Ashleigh asks them, ‘Where are my cigarettes?’ Luke A points to where he’s written them on the shopping list which pleases her.

Deana looks on, ‘Unbelievable. After she has made us eat cr*p for a week, I’ve put on weight.’ Luke A reminds her that it was Caroline who sabotaged last week’s shopping list. Adam pipes up, ‘But she knew about it, she was in cahoots with Caroline.’ Deana moans, ‘I’ve never eaten so much chocolate in my life!’
Adam and Deana start to bicker about her suggesting sabotaging this week’s shopping task. ‘You are doing the same as Caroline.’ The beauty queen concludes, ‘We will just have to agree to disagree.’ Adam says that’s fine.
11.54am
Sara is listing her favourite white things for Big Brother.

In the garden, Becky tells Ashleigh she is a bit chavvy, but Ashleigh is adamant she isn’t, saying that Lauren was the one who was really chavvy.

1.01pm
It is all getting a bit too much for housemates in the White Room. Conor is rocking back and fourth on a chair, and Sara looks deflated in bed.
In the bedroom, Becky is giving Scott a new haircut. ‘You have made it really patchy! Oh my god! Why have you done that? It looks like a sheared sheep!’ Becky and Ashleigh both say they like his new look.
2.31pm
In the White Room, housemates are setting each other dares. Sara announces, ‘The first person who drops the rolled up sock ball has to do a dare!’ They start throwing the ball to each other. Sara is the first to drop the ball and is dared to down some milk, ‘I can’t drink milk!’ The model attempts and succeeds and they go back to their game.
In the living area, Ashleigh admits, ‘I think Prince Harry is hot.’ Scott agrees. She continues, ‘He has such a rugby player body!’ Scott says that Prince William is very clean cut and too sophisticated. Ashleigh disagrees.
Back in the White Room, it’s Conor’s turn to do a dare. Sara dares him, ‘Brush your teeth with shower gel then gargle with milk!’ He does so. She shouts, ‘Oh yuck!’
Ashleigh declares, ‘I cried when William and Kate got married, thought it was the most romantic thing I’ve ever seen in my life!’ Becky asks Scott about the Queen’s bedroom. Scott reveals, ‘She sleeps separately from the Prince, they have their separate rooms.’ A puzzled Becky asks, ‘Are you joking me, how about sex?!” The trio laugh. ‘You can have sex until you’re dead!’
Adam butts in, ‘Are you talking about the Queen having sex?!’ Becky replies, ‘No, she doesn’t stay in the same bedroom as her husband.’ Scott says that lots of people don’t sleep in the same room as their partners.
5.06pm
Big Brother gathers the housemates in the living area were they are set to play a game of musical charades. Each housemate will perform a dance which will be played, minus the music, into the White Room. Sara, Conor and Luke S have to guess what song they are dancing to, if they get four or more correct they will be rewarded, if not they will be punished.
First to dance is Adam. He is dances to LMFAO ‘Sexy and I Know It’ and the trio guess correctly. Ashleigh is up next, she jumps up and down to House of Pain, ‘Jump Around’. The White Room housemates guess correctly again, and they high five each other!
Becky puts all her energy into Beyonce ‘Crazy in Love’. Sara shrieks, ‘That’s what Beyonce does!’ The White Room guess right. Deana is up next, she performs to Britney Spear ‘Womaniser’. She indicates shaving her head and the trio guess that it’s Britney Spears but call out the wrong song. Luke A hits the dance floor and dances to Girls Aloud ‘Love Machine’. They trio guess incorrectly. Conor shouts, ‘What the f**k?’
With three right and two wrong answers, the game hangs in the balance for the White Room. It’s all down to Scott’s performance of Kylie ‘I Can’t Get You Out of my Head’. Conor yells, ‘Come on Scott! Ah Scott, he’s not doing anything.’ Scott struggles and gives up, ‘I’m bored now, I’m going to sit down now.’ Sara thinks it’s a Kylie Minogue song but doesn’t know what it’s called. They give the wrong title and told they are wrong. The three housemates are annoyed and fail the task; they will receive their punishment later.
5.55pm
Sara is feeling the strain. ‘I can’t sit in here, I want to go home. It’s the lack of freedom. There’s no sunshine, no darkness…argh!’
The shopping is delivered to the house. The housemates cheer and rush to see their goods. Luke A says, ‘Please be right!’ Becky tells the lads it’s ‘brill’ and they are all our happy.
Big Brother rings through to the White Room to talk to Sara. The teary model moans, ‘I don’t want to stay here, I want to go out.’ She hangs up the phone and goes to cry to the bathroom. Big Brother calls again to speak to her, Luke S and Conor persuades her to speak to Big Brother again. ‘I’m stuck in a room, nothing to do. I have dirty hair.’ Big Brother tells her she shouldn’t worry about simple things like hair and that she’s in a hard environment. Sara then feels calmer and thanks them. She starts to laugh and the boys hug her.

7.08pm
Big Brother gathers the housemates on the sofas to watch the White Room make their first important decision. Luke S, Conor and Sara are given one minute to decide between them who will press their red button and leave the room immediately. Sara admits, ‘I don’t want to stay but I want to get into the final. Honestly guys, it’s fine.’ They all agree that Sara is to leave.
Luke S looks visibly upset, Scott remarks, ‘Let’s not pretend to be devastated, that’s ridiculous! I can’t watch.’
Sara is eliminated from the White Room and looses her opportunity to win a pass to the final. Upon departure, she wishes the two boys good luck.
The model is overjoyed when she returns to the house and her housemates welcome her back with open arms! She announces, ‘I want to get to the final, I’ve had an amazing time, what’s meant to be will be!’
9.27pm
In the White Room, Luke S and Conor are being punished for failing their musical charades task. They must chop enough onions to fill a container up to the red line. Luke S thinks, ‘What a f**king sh*t punishment.’
Sara goes to the diary room. ‘I feel fantastic, 100 times better. I wanted to go. If I’m not supposed to be in the final I’ll leave next week.’ She concludes that it’s great to be back in the house with everyone.
In the bathroom, Becky asks Ashleigh who she would choose to come out over Conor and Luke S. She replies, ‘That would be really hard, I couldn’t do that.’
11.38pm
In the White Room, Luke S and Conor are still being punished with chopping onions. Conor remarks, ‘It would be great if you and me were in the final.’
Sara has been talking politics for the past 37 minutes. The model says that she watches Question Time every single week and loves it. ‘I vote because women risk their lives for votes, I think it’s waste if you don’t. I agree on things from different parties.’ An inquisitive Deana asks her questions about how she makes her decision. Sara gets on the defensive, ‘I’m not arguing with you.’ Deana reacts, ‘I’m not arguing, it’s a discussion.’ The model snaps, ‘I don’t want to talk about politics, it’s the last thing I want to talk about.’
The beauty queen then reminds Sara that she’s been talking about politics for a long time. ‘If you are going to discuss something, you will be asked questions.’ Ashleigh agrees with Deana, and then the conversation ends.
In the White Room, the duo completes their punishment. Luke S moans, ‘My f**king hands stink!’

12.03am
Conor and Luke S start amusing themselves by throwing the left over onions into the bin in their room.
Deana is reflecting on her argument with Sara. ‘I would feel embarrassed if I didn’t know all the facts and kept discussing it. I’m not holding back anymore, I’m going to say what I think. I can’t sit there listening to some cr*p.’ She continues, ‘If you don’t know the facts on something don’t keep going on about it.’ Adam and Luke A listen on.

Sara is reflecting on her argument with Deana. ‘Politics generally, I don’t know how to speak about them.’ Ashleigh says she doesn’t know enough to talk about politics and adds, ‘Maybe Deana was trying to catch you out?’ Sara agrees and says, ‘If I’m your friend, why ask me the same question 40 times?!’
Scott says he would never do that to Sara. The model concludes, ‘I would never do that to her, that’s why I’m upset.’
Back in the smoking area, Deana sums up, ‘At the end of the day soldiers, if you two weren’t in here I would be completely f**ked.’