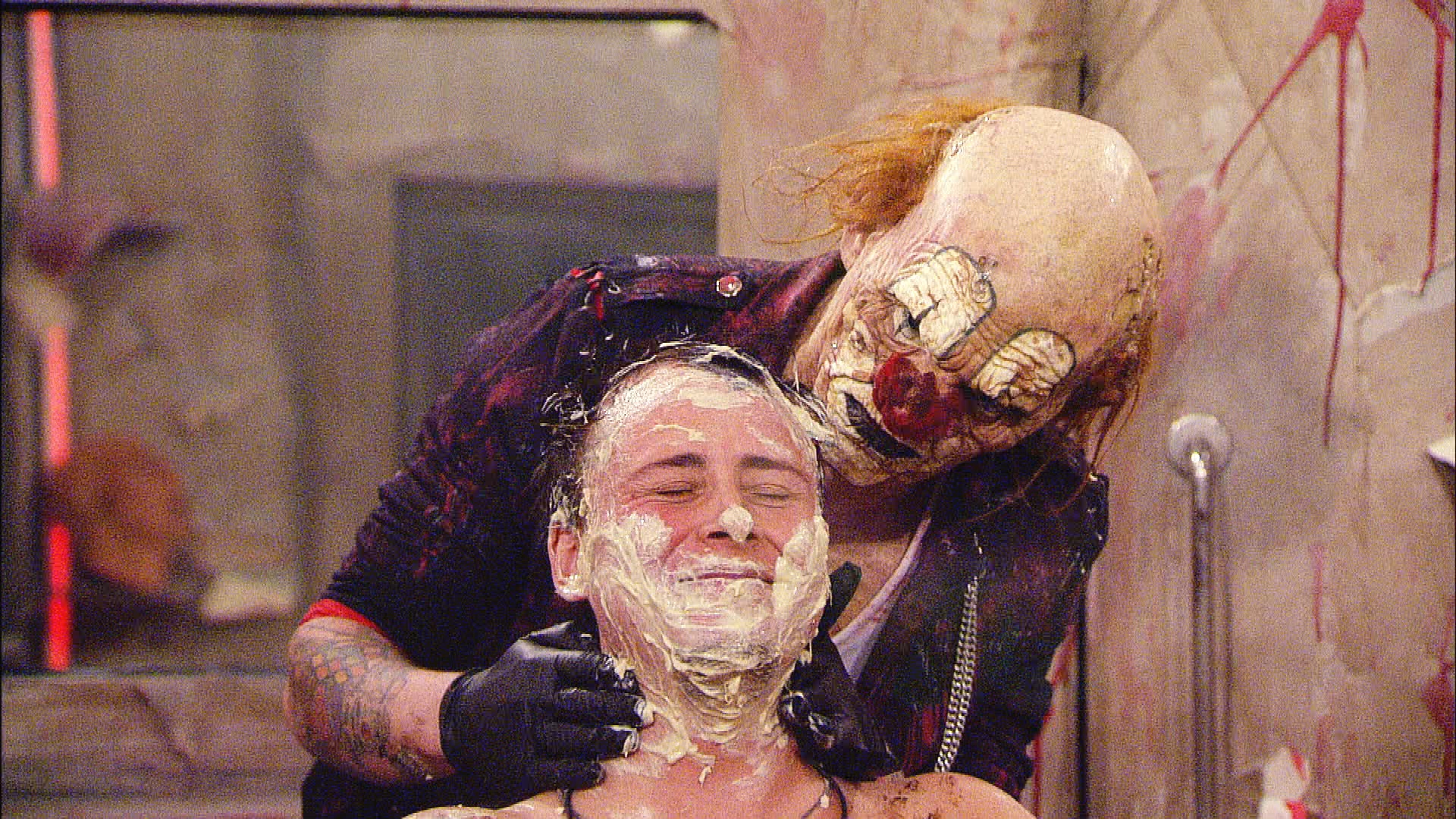 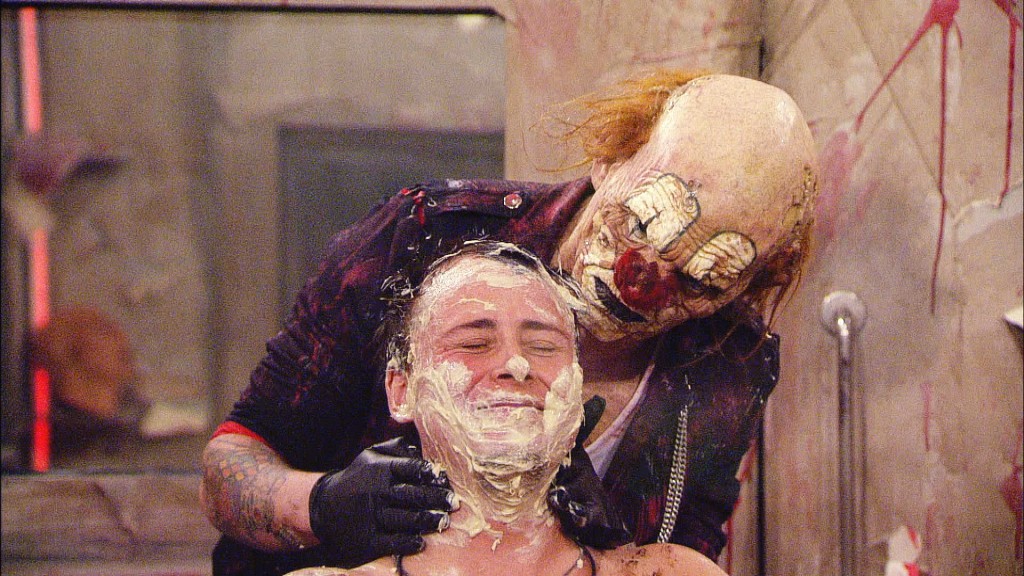 Day 67 in the Big Brother house…

9.45am
Tonight, Scott, Ashleigh, Adam and Deana face the public vote, what they don’t know is that it will be a double eviction.

In the smoking area, Sara tells Luke A and Adam, ‘I’ve got no clothes left now! I don’t know what I’m going to wear! Three days left so two more outfits…’ The model continues, ‘I would actually really like to be up tonight because if people don’t want me in the final then they wouldn’t let me be there.’

Luke A adds, ‘I didn’t think I would get this far, now I want to finish it. Wish I’d packed more clothes!’

For today’s task, housemates will visit Mr. Snuggles’ salon for some sick salon treatments to win real treatments for their friends. Big Brother gathers the housemates on the sofas to decide who will be paying Mr. Snuggles a visit. Scott reads out the instructions to his fellow housemates.

Scott announces he will go in for Sara. After much deliberation with Luke S, Ashleigh confirms that she will visit Mr. Snuggles. Adam and Luke A put themselves forward so Deana can receive a luxury treatment, she grins, ‘Thank you boys!’

It’s been ten minutes since housemates decided who will visit Mr. Snuggles. Sara tells Luke S, ‘You have the best girlfriend in the world! I certainly wouldn’t do that for my boyfriend.’

Ashleigh adds, ‘I know he wants it, I’m learning not to be selfish!’ Luke S smile, ‘New haircut! I can’t wait!’

Sara continues to comment about Luke S’ decision, ‘I can’t believe you done that!’ He replies, ‘I said I would go in.’

Ashleigh quips, ‘He’s just going to owe me when we get out of here!’

Ashleigh’s up first to visit the salon. She opens the salon door and screams, ‘No I can’t! No can’t do this!’ Mr Snuggles offers her a head shave. She returns to the diary room in tears, ‘He’s a scary clown! I can’t do it! I don’t like it! No, no!’ Big Brother tells her that Mr. Snuggles has another offer for her and convinces her to re-enter the salon. Mr. Snuggles creepily tells her that he will give her a fishy shampoo, and if she goes through with it Luke S will receive a professional haircut. Ashleigh agrees and Mr. Snuggles gets to work washing her hair. ‘Oh no! It f**king stinks! I hope he appreciates this, I’m going to look sh*t tonight!’

After the treatment she returns to the house with her fishy shampoo. Sara and Luke S try to console her. ‘It’s not funny. He looks like something out of Saw. He was really scary. I’ve gotta wash my hair.’

In the bathroom, Luke S offers to wash Ashleigh’s hair. ‘No I will just do it, don’t worry about it. It was horrible.’ He adds, ‘I’m trying to be sympathetic and you’re pushing me away.’

Sara then offers to help her, the Essex girl refuses.

Luke S tells Adam that Ashleigh is crying her eyes out. Adam and Luke A go to the bathroom to ask her what happened.

Ashleigh thanks Sara for helping her with her towel. Luke S asks her, ‘Do I get a hug now? Why am I not allowed to help? Makes me look stupid.’ She replies, ‘You don’t understand it was really scary.’

It’s Scott’s turn to step into Mr. Snuggles’ salon. He must endure a deep mahogany face and hand spray tan in order for Sara to receive a full body spray tan later. ‘Oh my, oh my! I think I’ve blended into the room. I’m very pretty now! Thank you so much.’

In the diary room, Big Brother tells him not to shower for at least two hours. He quips ‘Oh my god! It better look good.’ He then returns to the house. ‘Just perfect for my eviction!’

Luke S is having another go at trying to make Ashleigh happy after her trip to Mr. Snuggles, ‘Just let me know if you need anything.’ He tucks her into bed.

It’s been less than two hours since Scott received his deep mahogany spray tan and he’s having a good scrub with his towel in the mirror. ‘I really like it now!’

It’s time for Luke A and Adam to face Mr. Snuggles’ salon in order for Deana to receive her luxury treatments. Mr. Snuggles tells Adam, ‘I’ve got crabs and offering you a crab manicure and pedicure to get rid of all your dry skin!’ He quips, ‘You nasty b*stard! Oh this is f**ked up! Wait till my homies see this sh*t!’

Luke A receives a stinky facial and mud wrap which he cheerfully bears. He tells Big Brother, ‘My skin feels tingly and salty, and sh*tty.’

Big Brother gathers housemates on the sofas to reveal the results from Mr. Snuggles’ salon. Ashleigh, Luke A and Adam were all successful, meaning Luke S will receive a haircut and colour by a top stylist and Deana will receive a manicure and pedicure. As Scott removed the tan within the two hours, Sara won’t receive her treatment. A bemused Scott shouts, ‘I didn’t! I used moisturiser!’

He goes to diary room and Big Brother explains that he didn’t let his tan develop. He moans, ‘I was getting it off my hair line, I liked it! I just put moisturise on and washed my hands….I don’t want to talk about it anyone.’

In the bathroom, it’s time for Deana and Luke S to get a proper pampering. Sara and Ashleigh look on and swoon over the professional hairdresser.

Luke S tells the hairdresser, ‘I feel bad for Ashleigh, she wanted her hair done.’ He adds, ‘Have I got a receding hairline? I look at it everyday!’

Housemates are preparing for tonight’s eviction. Adam admits to Deana that he is nervous. She replies, ‘Come on, man up! Don’t be silly!’

Luke S tells Ashleigh that he doesn’t want her to leave.

Scott asks, ‘Sara can you look after me?’ She replies, ‘Of course I can.’ The pair hug.

Scott tells Big Brother, ‘My experience in this house was the best of times, and the worst of times. It was a season of hope and a season if despair.’

Deana thinks, ‘It will be amazing if I get to the end! If I do it will be unexpected.’ She practices her ‘leaving’ pose. She believes that her greatest achievement was surviving all the nominations.

Ashleigh talks to Big Brother, ‘It would be amazing to stay! If I do go, I see will see everyone out there. I’d like to be remembered as myself, Ashleigh from Essex.’

Adam tells Big Brother, ‘Luke A is definitely going to be a friend. I’m so close yet so so far. I think I will be able to leave with my head held high.’

After in the smoking area, Adam tells Luke A that he thinks two housemates will be evicted.

Housemates have gathered for the first of tonight’s evictions. The housemates all mention that they are nervous. Brian Dowling’s voice comes into the house and he reveals that Scott is to be evicted. Ashleigh shouts, ‘Oh my god, no way!’

All housemates wish Scott the best and wave him goodbye. Sara yells, ‘You got cheers! I love you!’

Brian comes back on and reveals that there’s a double eviction and Ashleigh is the next to be evicted. All housemates give her a hug and wish her luck. She shouts, ‘I can’t wait to see you guys at the final!’ Ashleigh gives Luke S a kiss and tells him, ‘I’ll see you later!’ Luke S is visibly upset. Sara yells, ‘Embrace it!’ Ashleigh leaves the house and the remaining housemates console Luke S. Sara tells him that there are only three days left. Adam is overcome with relief.

It’s been four minutes since Ashleigh left. The remaining housemates are suspicious of the sounds in the garden. For the last nine minutes, Bit On The Side have been setting up to broadcast live from the garden. Luke A hears a voice, ‘Its Emma Willis!’ Luke S quips, ‘They are in the garden! Glad I’ve put something smart on!’

The door shutters are raised to reveal the housemates to the audience in the garden. They wave from the living area. Emma welcomes Ashleigh and Scott back to the garden

Emma interviews Ashleigh, and shows her the VT of when Luke S said he would like to lead more of a bachelor, single life after Big Brother.

Luke S looks on mortified. ‘I’ll explain! It’s out of context.’ From the garden, Ashleigh is annoyed!

Sara talks to Big Brother, ‘I’m just so emotional…oh man, this is one of the best days of my life. I’m upset that Scott and Ashleigh have gone; I didn’t think Scott was going to leave. I just want to look after him. I wanted to run up the stairs and just grab him.’ The model continues, ‘Over the last week or so me and Ash have become close. I will miss them both loads. I’m so happy I’ve made the final, I never thought I would make the final ever!’

Luke A, Adam, Deana and Luke S are talking in the living area. Luke S admits, ‘I’ve lost everyone along the way.’ Adam adds, ‘Yep, all your selfish, superficial friends…one’s gone with 50 grand!’

Deana adds, ‘You should have stuck with us!’ She continues, ‘If I was more like you – tidy and well groomed – my mum would be so happy.’

They all laugh. Deana explains, ‘There are some qualities that you have that I would absolutely love to have.’

She replies, ‘Shut up! You both have beautiful hearts.’ They all laugh.

In the bedroom, Sara is having difficulty taking her dress off, she tries using a coat hanger to undo her zip.

Luke S goes to talk to Big Brother. ‘Weird without Ashleigh here, wasn’t nice seeing her go. It’s going to be a lonely few days for me. He continues, ‘Ashleigh wouldn’t have liked seeing the VT of me…I have a lot of making up to do, hope she’s not too upset. I think we complement each other; I would do anything for her. I need to speak to her on Monday.’

In the smoking area, Deana tells her ‘soldiers’, ‘We made it!’ They smile.

Luke A says, ‘We can drop the soldiers thing now?’ She replies, ‘Is this the day we drop it? OK one last prayer.’

The beauty queen starts to pray and the men add their thanks. They say that they are ever so grateful and very thankful.

Luke A says, ‘Whatever happens will be a good result.’ Deana concludes, ‘That’s our last prayer soldiers, job done, over and out. Battle over.’