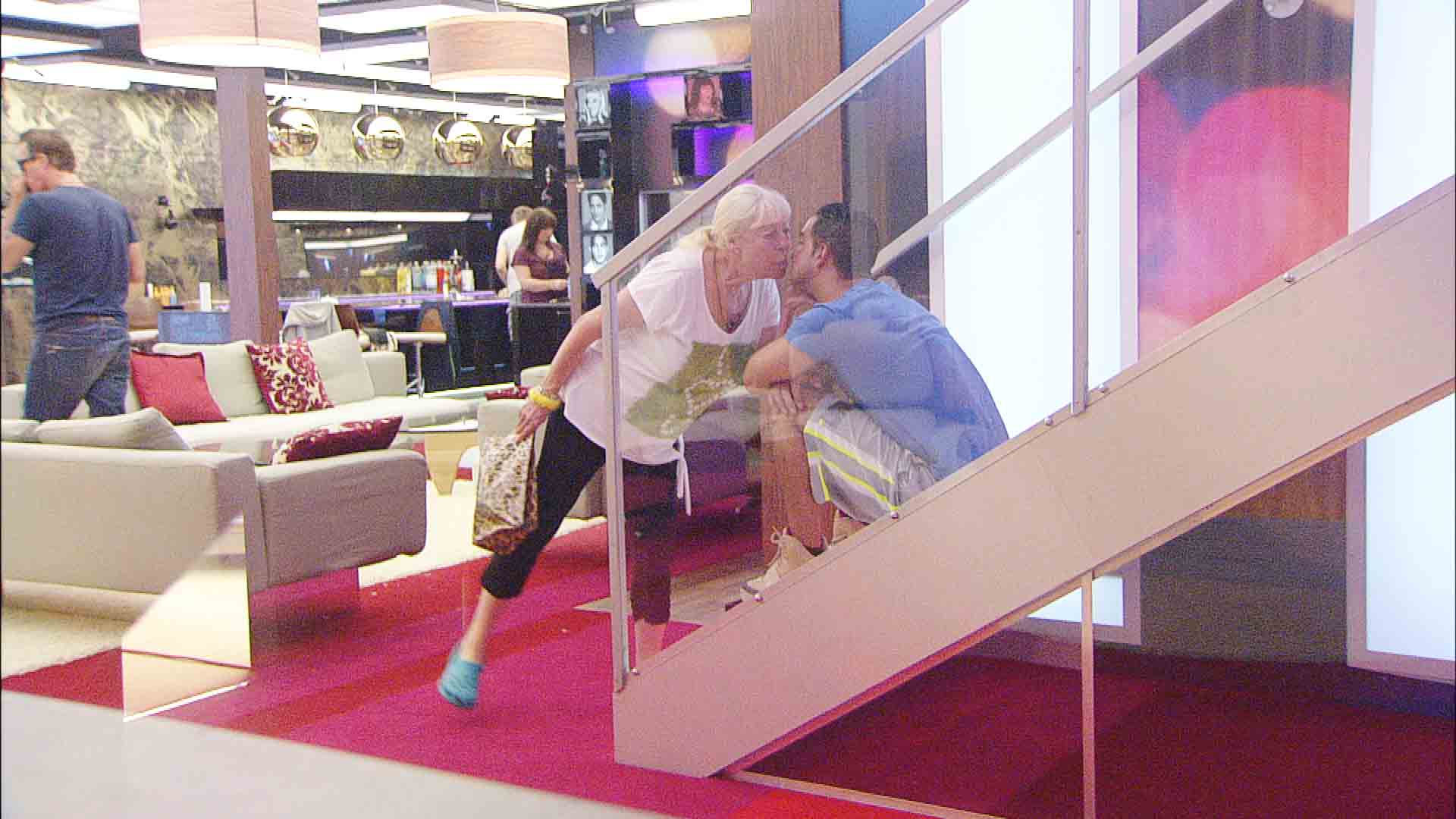 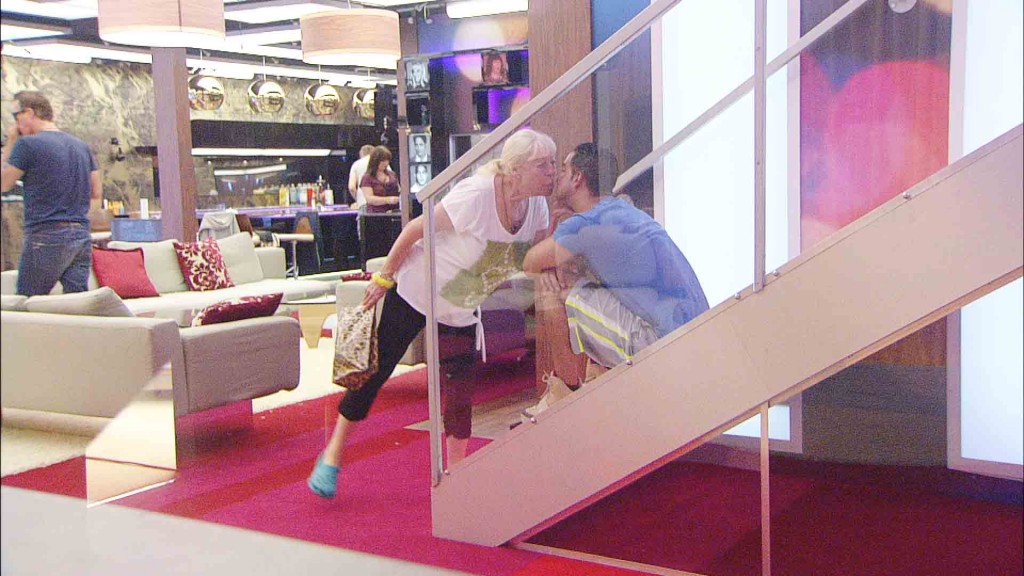 9:31AM
Today Housemates will nominate for the final time and nominations are on everyone’s mind. “Another day in paradise,” Julie quips as Prince Lorenzo confesses that has become accustomed to nominating. Martin continues to brand nominations: “the most adrenalin part of the week,” and meanwhile in the garden, Ashley relaxes in the hot tub.

In the bedroom Harvey declares: “I hate this show,” before Julie assures him: “We will be fine babes.” Harvey tells Julie not to talk about nominating because he doesn’t want “anybody to get into the trouble” and Julie is in agreement.

In the diary room, The Situation is discussing with Big Brother how he feels about being banned from nominating. He confesses that it is “kind of nice” because he doesn’t have to “hurt anybody’s feelings,” but he feels that his “vote has been taken away.” The Situation adds: “It feels like your hands are like this (puts his hands above his head) and that somebody can come up to you and just punch you in the stomach.” He admits to enjoying nominating and feels upset because he cannot voice his opinion.

11.10AM
In the kitchen, The Situation is alone talking to an imaginary housemate.

Martin, Harvey and Ashley are in the bedroom doing their laundry. Prince Lorenzo tells them that they don’t have to wash the double bed’s sheets before realizing that they are in anticipation of somebody leaving the house, and the option of an extra bed. Martin continues to joke with Harvey about “getting lucky” as Harvey replies: “What with the right hand!” Laughter fills the bedroom as Martin continues to quip: “It will give you extra tent space.”

Julie and Coleen are in the smoking area talking about making it to the final week. Julie is acknowledging that some housemates get along better than others. Coleen agrees and brands this as “human nature,” before Julie claims that the “younger ones” have “formed a gang” in the house. Julie continues: “I do love them to pieces, but they are a little gang,” and the women continue to sit in silence.

12:18PM
Coleen is helping The Situation to dye his hair black.

In the garden, Martin and Prince Lorenzo are engaging in conversation about fine art.

In the diary room, Harvey is talking to Big Brother about the looming nominations. Harvey admits that he “feels ready” to nominate as he has observed different behaviours in his fellow housemates. He claims that Julie and Coleen do not like each other and that there is an element of fakeness there. Harvey continues: “There are certain people that are trying to pull me into corners today and I’m not comfortable with it. I’m going to do what I have to do today. What will be will be.”

1:36PM
The Situation has been sitting on the naughty step for forty-one minutes. In the living area Julie is admiring Harvey’s ring on his pinky finger.

With five votes Julie will be facing the public vote this week, alongside Prince Lorenzo and Martin who incurred three votes each. Coleen and Ashley did not receive any nominations.

The Situation requests if he may use the rest room and declares: “I’ve been punished enough.” Harvey brands The Situation as a “unique guy,” as Big Brother confirms he may leave the naughty step.

Ashley is pampering himself in the living area. Julie has come to the diary room and confesses that she is “apprehensive” about the nomination results and is “praying” to make it to the final. Beginning to cry, Julie claims that she would be “ecstatic” if she made it to the final and brands herself: “a big softy underneath the bravado.” She continues to claim that if she made to the final, it would “give hope to pensioners all over” and adds that she would “like to do that.”

In the smoking area Coleen and Prince Lorenzo are talking about “the boys.” Coleen declares that she “doesn’t want to be a part of any gang” and Prince Lorenzo claims that whilst he is “seven years older than Harvey,” it seems that Harvey is twenty-years younger. Coleen claims that “true friendship” is when you can admit to friends “that they are wrong” and that “the boys” have not done that. Prince Lorenzo affirms to Coleen that “he likes Mike” but confesses that he thinks The Situation “would throw him under a bus in second.”

6:39PM
In today’s task two near naked celebrities will be plunged. Martin and Prince Lorenzo must endure plungers being stuck to their bodies from their team mates. “I’ve never felt so naked in this place” Prince Lorenzo asserts as Coleen quips: “My days are getting better and better in here.”

Julie assures Martin: “I’ll be careful around your bum bum” and he responds: “That was the bit I was looking forward to.” Prince Lorenzo declares: “I’m ready to be plunged.” Housemates begin to stick plungers onto Martin and Prince Lorenzo’s bodies. As the finish claxon sounds, Ashley celebrates at their team’s evident win. With a score of twenty points, Prince Lorenzo’s team wins and have won a take-away.

8.04PM
Big Brother announces that the losing team will be eating gruel this evening, using plungers to eat with. They must continue to eat until the winning team has finished their pizza. Ashley informs The Situation that Big Brother has taken his food away and The Situation is disbelieving because he had cooked for two hours. Ashley reminds The Situation that “it is a game” and deters him from becoming angry: “Don’t smash up nothing.”

The losing team takes their first spoonfuls of gruel as Martin speculates it will be the winning team that “will suffer.” He quips: “We’ll have enough gas after eating this” as Harvey spits out what he has eaten. As the winning toasts to their victory, Martin attempts to make light out of eating gruel: “We needed to eat some greens anyway” as Julie is heaving into a bowl.

The Situation comes to the diary room and tells Big Brother that he feels unwell. Big Brother advises him that he may feel better after he has eaten some gruel. On exiting the diary room, Martin asks The Situation what Big Brother said. The Situation responds: “They told me to join my fellow losers and eat you f*****g gruel pretty much” as housemates laugh. Ashley announces that the winning team has finished their meal and that the losing team is therefore allowed to stop eating the gruel. Julian playfully responds: “I’m not finished yet” as Coleen brands him “horrible.” The Situation jokes to Julian that he would “love to dump” the bucket of gruel on his head, as Julian claims that he is “still peckish.”

9:01PM
In the garden, housemates are speculating about their final week in the house. Ashley claims that everyone is waiting for the final five people as Prince Lorenzo speculates that it may not be five housemates in the final.

The Situation confesses that he would have “thrown something across the floor” if he had been up for nomination. On hearing this Coleen informs The Situation that he is “not good for her” in the house. She continues to say: “I adore you when you are like this and when you are like that my motherhead comes on and I want to take you out and whack you on the leg.” The Situation defends himself and replies: “I stopped myself though” as Coleen replies: “It took a while though. I thought I’m going to go at him, smack his leg, ground him and put him back on the naughty step.”

The Situation admits that he gets angry quite easily and Coleen questions what his “trigger is.” He continues to confess that his triggers are “pride” and “authority” and Julian asks: “Do you think it’s just attention seeking?” The Situation adds defiantly “No, it’s just the person I am” and continues to ask housemates whether they feel “comfortable” around him. Coleen assures his that she is “really comfortable” with him and does not think that he would do anything “crazy.”

9:33PM
Housemates have been gathered for this weeks nominations. Prince Lorenzo, Martin and Julie are told that they will face the public vote this week. “Well that makes a change” Martin quips as Julie mutters to Julian: “All ganged up on.” Julian reassures Julie and responds: “I’ll say what you said to me, you’re going nowhere.” Prince Lorenzo asks Julie how she is feeling and Julie replies “I’m okay. We’ve got to be.”

In the smoking area The Situation admits to Ashley he is happy that Harvey and Ashley will be joining him in the final. Ashley confesses that is he “proud of himself.” Meanwhile, in the kitchen, Julie declares: “It’s not easy being a nana,” as Julian assures her that he will be there for her. Julie speculates that it was “the gang” that nominated her and continues to add: “Is that how you treat your nana?” Julian labels Harvey, The Situation and Ashley as “the untouchables,” and claims that they have done to Julie what they had done to Rhian and Danica.

10:30PM
Coleen is talking to Julian about Julie. Coleen speculates that Julie will feel better in the morning. Julian claims that Julie is reacting in the same “f*** everybody” way that he reacted when facing eviction. Coleen proposes that Julie should remember that she too had to nominate two people and that it is “hypocritical” to be angry. Julian considers that it might be harder to deal with if “you are nana to everyone.”

Julie is in the diary room and confesses that she is “shocked” by the nomination results as she has been “kind and caring” to all her housemates. She declares that housemates who nominated her should “feel like s**t,” and speculates she is facing eviction because she is “old,” “is not part of the gang,” and that “Coleen wanted to be the only woman left.” Julie confesses that all she wanted was to get into the final.

11:01PM
Martin has come to the diary room and confesses: “I hope I haven’t offended anyone.” He continues to claim that Prince Lorenzo expected to be nominated “many moons ago.” Martin proposes that housemates have seen the “dark side to Julie” and asserts: “I’m glad Julie is up.”

In the smoking area Julie speculates to Julian that she may not be able to nice anymore to her housemates. Branding her housemates as “two-faced b*****d’s,” Julie affirms: “Don’t come snivelling around me.” Observing Coleen getting out of the hot tub, Julie jokes to Julian: “She can get her fat a*** out.” Harvey addresses Coleen as “Mama” and Julie declares: “Like rats to a deserting ship.”

12:07PM
Julie and Julian are in the bedroom. Julian brands nominations as “fair” because “everybody has to nominate”, Julie is dismissive and asserts: “Let them rot in hell.”

In the smoking area Coleen confesses to Ashley that she feels sorry for Julie. The pair agrees that they both have “respect” for Julie’s age and career but Ashley admits: “I can only take so much.” Coleen claims that Julie “shot herself in the foot” because she was “unable to keep up the act,” and has “shown her true colours.”

In the bedroom, Julian jokes to Julie: “You might not be nana anymore.” She confesses that she will be “charming” tomorrow and continues to ass: “I’m quite a good actress. I am honest. I’ve got a lot of awards for it. I shall pull another one out the bag tomorrow,” Julian, in response, affirms: “Excellent.”