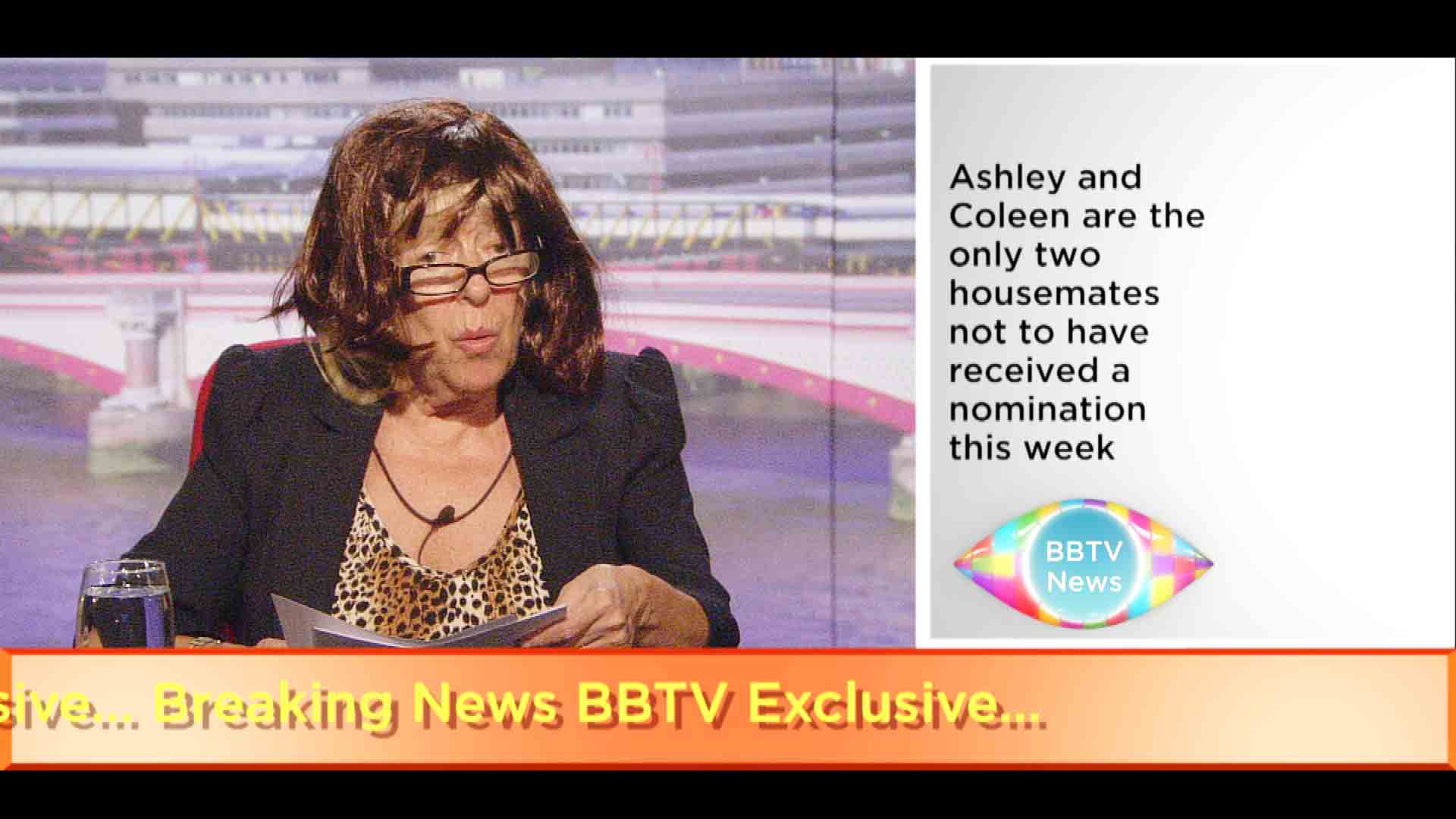 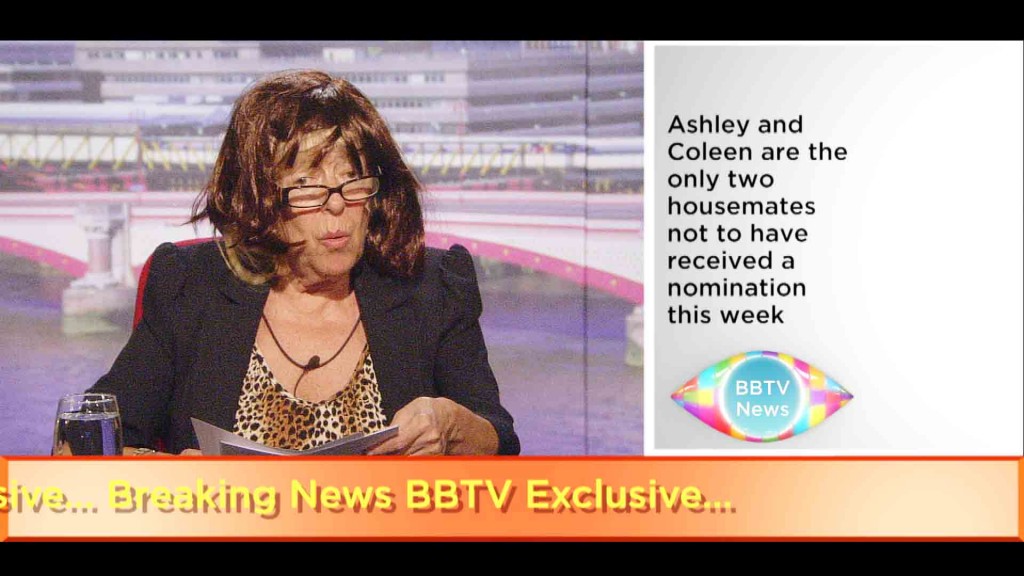 9:54AM
The Big Brother house has been given a transformation for the shopping task this week. Housemates are speculating what the task will be as Prince Lorenzo exclaims: “It looks like a fun park.”

In the bedroom, Julie apologises to Coleen about her behaviour yesterday following the nominations result. Coleen assures Julie that she understands and asserts: “You needed time to let it sink in.” Julie then apologizes to Martin and continues to tell Coleen that she “loves” her.

On exiting the bedroom, Julie observes that the living room has been transformed. Seemingly dazed, Julie says: “Oh for Gods sake. What the f***? I love it,” before speculating that Big Brother has brought in her tea-pot from home.

In the kitchen Coleen is discussing with Julie making the final the week. On hearing this, Julie confesses that she wanted to make the final and claims that she has “done her best.” Coleen admits that she did not think that Julie would do any of the trials Big Brother set housemates. Seemingly surprised, Julie responds: “Give over.”

11:12AM
Due to medical reasons, Julie is unable to wash her own hair and a hairdresser has come into the house to assist her.

Julian is in the diary room talking about Julie. He confesses that Julie was “furious” last night after hearing the nomination results. Julian adds: “Last night she got into my bed reeking of whatever that perfume is she wears and had a bit of a rant about everything. Julie has woken up and is being charming to people and that’s a good idea. Her anger has evaporated a bit, so all in all Big Brother it could be worse.”

Harvey and Prince Lorenzo are in the gym. They can hear what Julie is saying in the next room. Prince Lorenzo declares: “Great actress” and Harvey continues to declare: “For a woman that has been given an award from your Majesty The Queen, her behaviour is very unprofessional. The way she is acting is a disgrace. She should be setting an example as a seventy year old woman that has lived through two world wars bro.” Prince Lorenzo is in agreement with Harvey and brands Julie a “very mean person.”

Harvey enters the garden and declares to an unaware Martin and Ashley: “Straight up, that’s why I’m staying away from that woman.” Martin and Ashleyare confused and Harvey sheds light upon the revelations he has overheard in the gym. Coleen overhears Harvey and questions what he and Prince Lorenzo have heard Julie say. Ashleycontemplates confronting Julie before she leaves the house as Prince Lorenzo brands her “two faced.” In response, Coleen quips: “Let’s be really nice and smoke her fags.”

11:37AM
Harvey has come to the diary room to talk about Julie. He brands Julie “the biggest actor” who has a “vindictive tongue.” Harvey continues to claim that Julie will do anything to make the final and finally declares: “Get her out.”

Coleen and Julian are having brunch. Coleen informs him that Prince Lorenzo and Harvey overheard Julie “slating everybody in the house.” Julian responds: “Well I know she’s not a sweet old dear.” Coleen assures Julian that Julie did not “bring him into it” and that she is set on making on the final. Julian confesses that he will take “on board” what Coleen has told him but speculates that Julie’s reaction is one of “fear.”

3:10PM
Big Brother has gathered housemates on the sofas to announce this weeks shopping task. Housemates are informed that they will be watching BBTV for two days and will be appearing on their own shows. Harvey and The Situation are the first housemates to appear on BBTV in the game show “Ask 100.”

Harvey re-enters the house and Julie declares: “Oi I want a word with you two, little s**t’s!” Both boys embrace Julie as The Situation quips: “He (Harvey) made me change my mind.”

3:43PM
Martin and Coleen are discussing the BBTV quiz. Martin brands the game as “wicked” and Coleen adds: “I don’t think I’m cruel enough for this game.” Coleen continues to speculate that Julie is trying to put on a “brave face,” and adds: “But you can see that she actually wants to twat them in the face.”

4:35PM
In the garden, Harvey is working on his music.

Martin and Julie are discussing their careers. Martin becomes emotional as he talks about his late parents. Julie claims that the Big Brother house has brought emotions to the surface and confesses that she is shocked Martin and herself are facing eviction.

5:07PM
As part of the BBTV shopping task, it is time for the first episode of The Growlers. Housemates are gathered on the sofas to watch Ashley, Martin and Prince Lorenzo perform.

Prince Lorenzo narrates as Martin plays “Twitchy Growler” and Ashleyis “Itchy Growler.” Martin and Ashleyhave to do everything that Prince Lorenzo says including; drinking a garlic milkshake, brushing their teeth with fish guts and pouring custard on their heads.

7:34PM
For this weeks shopping task, Julie has become news anchor for BBTV. When music is played into the house she must get dress and make her way into the studio in one minute. The music begins to play into the house, Julie jumps and declares: “F*** off,” as her fellow housemates take their places on the sofas to watch.

Julie exclusively reveals that Coleen and Ashleyreceived zero nominations and continues to reveal her own reaction to being nominated last night: “Quite frankly I hope the people that nominated me feel like s***.” Julie goes on to reveal that Prince Lorenzo said that he thinks Harvey acts like he is twenty years younger than him, and that The Situation “would throw him under a bus.” Finally, Harvey is exposed for his declaration that “Julie should be setting an example for somebody who has lived through two wars.” Julie smiles as in the living area housemates laugh and Coleen quips: “The smiling assassin.”

7:58PM
On revealing the revelations, Julie is seemingly annoyed by what she has heard. Branding Harvey as “pathetic,” Julian assures her: “It’s all nonsense.”

Coleen is worried about future breaking news bulletins on BBTV and jokes: “I’ve aged about one hundred and twelve years! I might as well tell you now that I’ve talked behind all your backs.” She claims that they “wouldn’t be human” if people didn’t say things.

Meanwhile, Julie jokes: “I think it’s lovely to be thought so highly of.” Julian speculates that everyone is “frightened” to say anything for fear of the news bulletin.

8:35PM
With supplies running low, Big Brother has provided housemates with cigarettes. Julie brands fellow housemates “animals” as they share around the cigarettes. She gets up from the smoking area as Prince Lorenzo affirms that they do not have a lighter. In response, The Situation accuses “G Mama Julie” of having his lighter. “You what? Don’t drag me into it you little s*** otherwise you won’t sleep tonight.” Martin jokes that housemates will be “rubbing sticks together soon” as Julie declares: “Give me b***** strength.”

Julian confesses that he asked Julie for a lighter and that she said no. Housemates are shocked that Julie would not give him a lighter because he has looked after her throughout the show. Ashleydeclares that he will go and ask Julie for a lighter and The Situation follows. He tells Julie that he “has not talked s*** about her” as Julian finds the lighter in his jean pocket. “That still wasn’t nice” The Situation declares to Julie, who responds: “I don’t want to be involved in all of it. The shouting and the rowing.” Julian deters the conversation and asks Julie: “Are you going for bath?” Julie declares: “If I’m allowed?” and The Situation leaves the bedroom.

In the smoking area, housemates remain shocked by Julie’s reaction to Julian. Julian defends an absent Julian and declares: “I don’t think we should gang up on her.” Coleen claims that if Jasmine if had behaved in the same way that all housemates would have gone “crazy,” as Harvey confesses he feels “hurt.”

9:50PM
In the smoking area the music plays again and Julie has one minute to make her way to the news desk. “Oh f*** off” she quips as Prince Lorenzo assures her that she has enough time.

Julie must read allowed her letter from home that she did not receive in the “Acid Test” task. Julie composes herself as Prince Lorenzo declares: “Just what the Doctor ordered for her.” On exiting the large task room, Julie confesses that it was “tough” to read her letter. She continues to speculate that Big Brother wanted her to break down before adding: “I’m made of strong stuff.”

11:16PM
Harvey and Ashleyis in the smoking area speculating who will leave the house tomorrow.

Julie and Julian are in bed together. Julian quips: “Tomorrow you’ll have to be a good girl,” as Julie claims that Martin should be saved by the public. Julian responds: “It is best if you stay” and adds: “for the fun of it.” Julie is seemingly upset by Harvey branding her a “disgrace,” as Julian quips: “You are a disgrace.” Julie replies: “Well yes I know I am, but they didn’t have to say that in the gym. If they had balls they would say it to my face,” as Julian comments: “You said you wanted to grow old disgracefully. Well, mission accomplished.” Julie affectionately kisses Julian on the forehead as she declares: “I was determined to.”