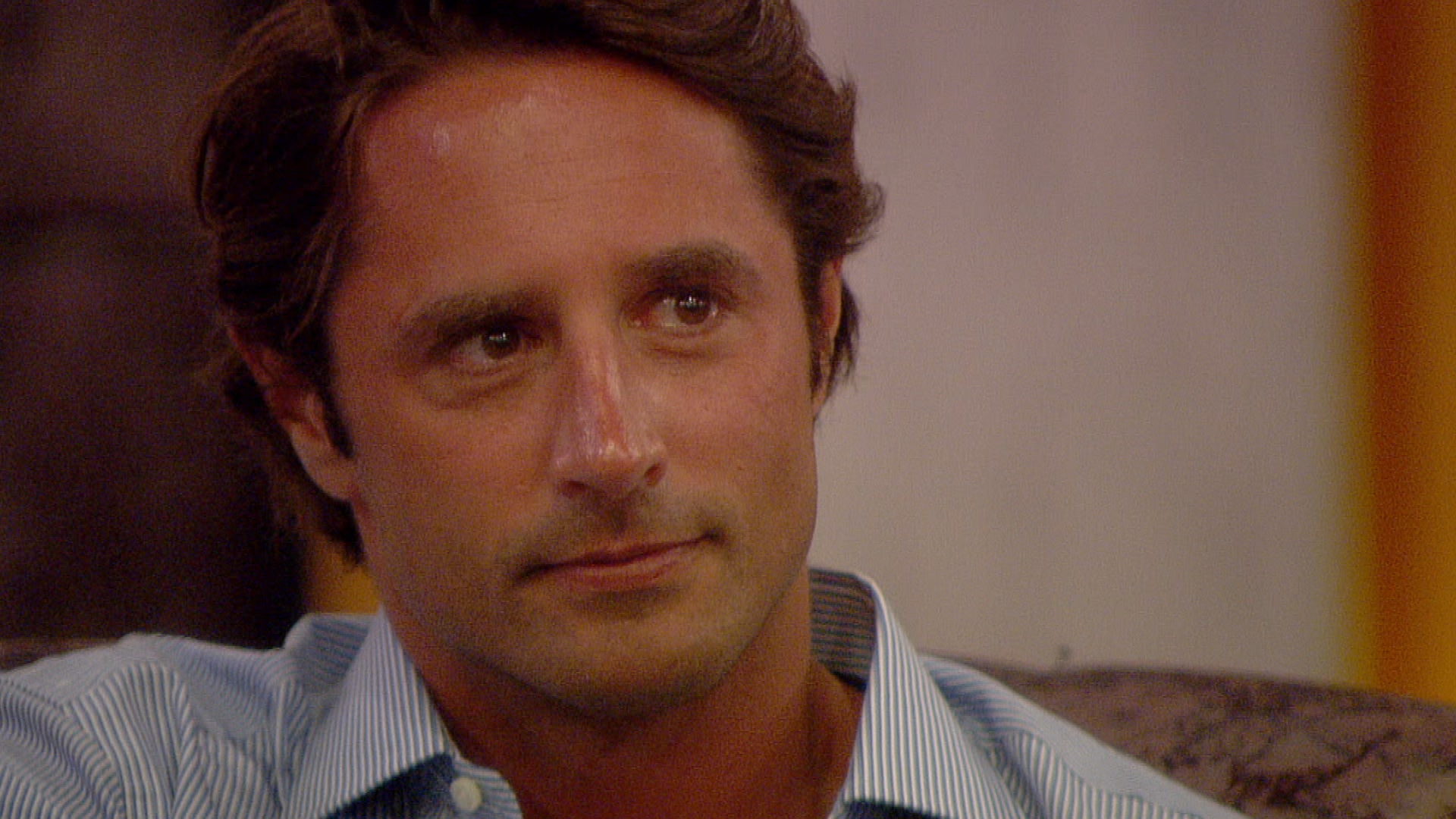 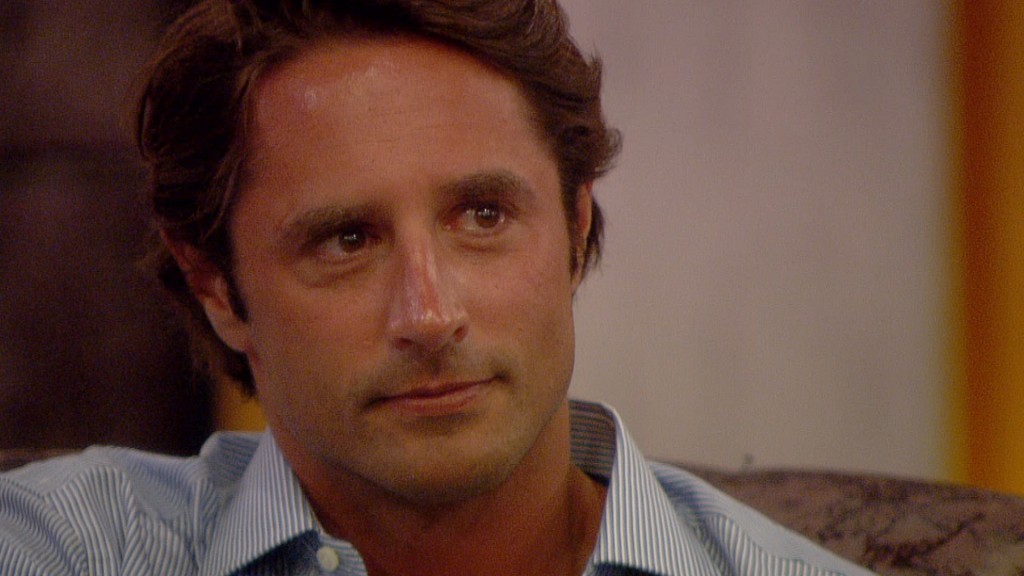 Previously in the final shopping task BBTV took over the house. Housemates became the stars of their own TV shows. Julie became a news reader on BBTV News and yesterday revealed what Harvey had to said to Prince Lorenzo about her in the gym. Since then, Julie and Harvey have hardly spoken.

11:47AM
Julie and Harvey are in the smoking area. Julie asks Harvey: “Are you okay?” and Harvey assures his “Nana” that he is “relaxing.” Julie is inquisitive about whether Harvey “has something to say” to her. Harvey confesses that after the nomination results he felt “hurt” because Julie became “cold” and “unapproachable.” In response, Julie affirms that she was “shocked” by the nominations but adds: “I certainly didn’t change.” Harvey claims that he and Ashley were speculating whether they had “done something” to upset Julie and affirms: “You know me Nana. I say it how it is. I’m not the backstabbing type.” Harvey continues to reassure Julie that it has been “nice” having a “nana” in the house, as Julie explains it was “hard” to read what Harvey had said about her in the gym to Prince Lorenzo. She declares: “I love you babe,” as Harvey claims that he will always confront housemates to their face. On hearing this, Julie quips: “But that was in the gym,” and continues to declare: “It’s a game. I’ll love you in here and I’ll love you out there.”

1:28AM
The Situation has been making a chicken sandwich.

Coleen and Julie are in the smoking area. The Situation enters the garden and asks Coleen if she would like half of his sandwich. On hearing this, Julie is seemingly offended at not being asked, and she begins to tut loudly. The Situation overhears Julie’s distaste and declares: “Oh, alright, okay, somebody wants some, somebody wants some.” Julie brands The Situation as “caring” and mutters: “with the team, the boys.” The Situation admits that he gave his last piece of sandwich to Harvey as Julie adds: “Of course you did.” Julie continues to shower The Situation with compliments about his “caring nature.”

In the living area Coleen is talking to Julian about Julie. Julian admits that Julie “could have let it go” and confesses: “She reminds me of Bette Davis.” Coleen agrees and adds: “I thought that. When she came out of that newsroom I thought oh look it’s Baby Jane.”
The Situation continues to offer Julie a chicken sandwich and Julie eventually obliges.

1:47PM
For the next part of the shopping task, Coleen and Julian have become presenters on Big Brother’s shopping programme “Big Brother’s Big Deals.”

Housemates are gathered on the sofas to watch the shopping channel. In order to pass the task, Prince Lorenzo must remember and place an order of at least ten items that Coleen and Julian will be promoting.

The first item is a nose hair trimmer. Julian asks Coleen to “insert it into the orifice of her choice.” Julian uses the hair trimmer before asking Coleen: “Stick your finger up there and see how smooth it is.” In the living area, housemates laugh as a shocked Prince Lorenzo exclaims: “Oh my God.”

The next item are chicken fillet bust enhancers. Julian inserts a chicken fillet down Coleen’s top and quips: “Oh I say, this is a new experience.” On seeing this, Julie begins to laugh, as Coleen places chicken fillets into Julian’s shirt.

Up next are edible caterpillars. Coleen and Julian take bites simultaneously and attempt to maintain smiles. In the living area, a squeamish Prince Lorenzo exclaims “That’s gross. Oh my gosh.” Julian compares the caterpillars to “pork scratchings”, and Coleen brands them as “delicious.” Julian continues to ask Coleen: “Do you swallow?” as Coleen responds: “Not often, but I did then.”

Item four is edible underwear. In the living area, The Situation is seemingly joyful as models wearing the edible underwear appear on screen. Julian instructs the model to place his hands above his head as he willingly demonstrates eating the candy: “Absolutely delicious” Julian quips and adds: “Full of protein.”

The next item is a jockey training machine. Coleen takes her position on the machine as she declares: “Every home should have one. Obviously you need to wear a sports bra when riding this.”

In the living area, housemates are beside themselves with laughter and it is now Julian’s turn to demonstrate the jockey training machine. He asks that the machine be turned onto a faster setting and jokes: “I think I’m experienced enough in this department. Stop it Rolf stop it,” as viewers continue to laugh. The Situation is shocked and exclaims: “Wow. He’s really going for it!” as Coleen claims that the jockey training machine is good for people who live alone. In response, Julian declares: “You may want to close the curtains.”

The sixth item is a caricature of Julie. “Who wouldn’t want this above their fire place at home?” Coleen jokes.

An egg and mud face mask is seventh item. Julian slaps the mask onto Coleen’s face as she describes the product as “lovely.” Julian continues to smear the mask onto Coleen’s decollage area, as housemates watch on in shock. As Coleen removes cucumbers from her eyes, Julian claims that the mask has “taken years off” her.

Item eight is a ventriloquist doll. Coleen speculates that it is Prince Lorenzo and Julian imitates him.

Item nine is a shake weight. Julian declares: “I owe my body to this item.” Coleen demonstrates how to use the shake weight as she declares suggestively: “Who couldn’t enjoy that movement every day?”

Item ten is Julie and Prince Lorenzo voice spray. Coleen and Julian imitate their fellow housemates as Julie and Prince Lorenzo laugh. Big Brother’s Big Deals has finished and Julian quips: “Poor Coleen,” as Coleen mutters: “I’m actually going to smash your face in.” Julian apologizes for putting the chicken fillets down Coleen’s top as she replies: “It was marvellous.”

4:36PM
Ashley is asleep in the living area as Julie is talking to herself in the bedroom. She is pleading with viewers to keep her in the house.

The BBTV News music is played into the house and Julie takes her position as the news reader. Julie reveals that Coleen declared that her “life was complete” when she stood in the bedroom with Martin in his underwear. She continues to reveal what Coleen and Harvey said about her at 7:25pm in a conversation involving cigarettes. Julie reveals that Coleen claimed that she was “a nicer person” than her, as she would have behaved differently.

On exiting the newsroom, Julie is smoking. Housemates laugh as Harvey quips: “She’s rocking it.” Coleen confesses that Julie “scares” her as Julie enters the living room and jokes: “Come on then, come and have a snout with nana and prove that you’re a nicer person.” Julie then comes over to an uncomfortable Coleen and kisses her all over before declaring: “It’s a game.”

5:03PM
Julie’s kiss is still on Coleen’s mind. In the diary room Coleen declares: “She took it well. She came at me like a smiling assassin.”

In the garden, Julie is assuring Ashley that she has always given fellow housemates her cigarettes. Ashley is unsure, as Julie asserts: “I did until the point where nana had to stop to be able to survive herself. That doesn’t make me a bad person.” Ashley claims that Coleen did not mean anything by what she said and continues to brand her a “nice person”. “ He continues to confess that he “loves” Coleen and Julie responds: “And you love me.” Ashley then declares: “I love you both.”

In the living area Martin is speculating that Julie has changed and has “come around.” Coleen and Prince Lorenzo disagree.

Coleen enters the garden and Julie asserts: “Come on babe. Come and have a snout.” Coleen responds: “I can’t sit here and deny it. I said that. I was absolutely frantic for a cigarette.” Julie assures Coleen that as a “survivor” she could not be left without any cigarettes and comments: “I’m not a bad person. I do not bare grudges and I completely understand.”

9:10PM
On BBTV News Julie announces that housemates have passed this weeks shopping task and will receive a luxury shopping budget.

10:53PM
Big Brother has gathered the housemates for an announcement. As an extra reward for passing the task Prince Lorenzo, Martin and Ashley receive their letters from home. Coleen reads aloud Prince Lorenzo’s letter, who becomes tearful. Julian reads Martin’s letter and Harvey reads Ashley’s letter. Ashley exits the living area as Coleen speculates: “I think he just wants to let it all out.” Harvey follows Ashley into the bedroom and asks if he wants to be alone. Harvey declares: “Don’t worry soldier, you’ve done them proud brother” as Ashley cries.

11:27PM
Tonight could be the final night in the house for Prince Lorenzo, Martin and Julie. Julie is in the diary room reflecting upon her experience. She asserts: “If I said that I would do anything different then surely I wouldn’t be being true to myself. I’m a giver not a taker, but if you add to that I’m a survivor as well then that’s a combination. I know that people watching me will see me as Bet Lynch, Queen of the Rovers for twenty-five years, in here I’m just nana, not even Julie and that’s fine, Bro. I’ve learnt a lot, and it’s good.”

Prince Lorenzo is next into the diary room and declares: “I’ve been as real as I can be 99% of the time. If I leave tomorrow then I had everything I wanted and more, and I’m fine with that.”

Martin is the final housemate into the diary room and confesses that he has done what he wanted to do in the house: “I did it how I wanted to do it. I came in and I’ve been the person that I am at home. The person you’ve seen me as in here, is the person my kids see me as and that’s dad.”