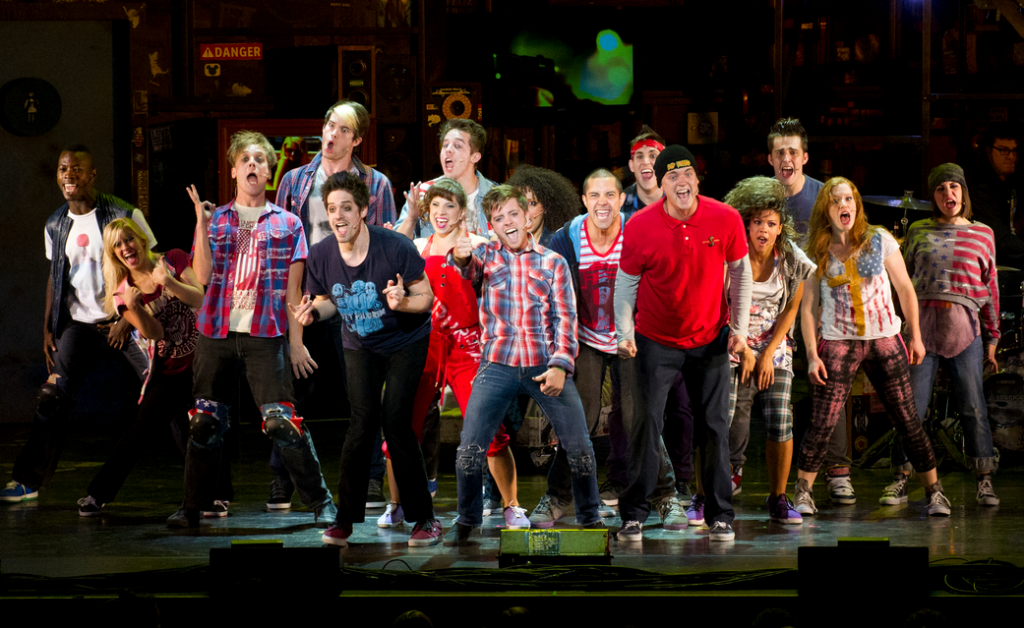 On paper, musical theatre and punk-rock simply shouldn’t mix. Whilst one is generally wild and unpredictable, the other is typically rigid and well-rehearsed. It came as a welcome surprise, then, to see these two contrasting art forms working so well together at last night’s Edinburgh premier of the Broadway smash-hit rock opera American Idiot.

Telling the story of three childhood friends who struggle to find their own identities in a bewildering post-9/11 world, the production makes for an amazing theatrical interpretation of Green Day’s phenomenally successful 2004 concept album of the same name. Protagonist Johnny (Alex Nee) leaves his home town for the city as he believes that creative minds will convene, experiment and
thrive there but soon finds himself surrounded only by drugs, loneliness and a Boulevard of Broken Dreams. Bearing a striking resemblance to the Green Day front-man, Alex Nee steals the show as he morphs into character as the frustrated and angst-ridden American youth who is as much at war with himself as he is with the world. As talented a musician as he is an actor, he takes on the role
with such ease and professionalism that it’s easy to forget that this is actually his first leading role in an international touring production.

An impressive set design coupled with a suitably young and energetic cast made for a visually striking performance and the on-stage live band worked well to blur the line between it being a musical and a rock concert. Throughout the show, the score stayed remarkably true to the original, with only minimal changes being made in order to leave room for some story and character development. That being said, the lack of a clear and consistent script between songs might have made it difficult for those not already familiar with the concept behind the hit record to follow the narrative. However, the pulsating live band and talented performers more than made up for it with their magnetic charisma and endless bouts of onstage energy. American Idiot is a vibrant rock extravaganza which makes for an entertaining alternative night at the theatre.

American Idiot runs at The Playhouse Theatre from now until Saturday 27th October. For tickets, visit www.edinburghplayhouse.org.uk or call 0131 524 3333.