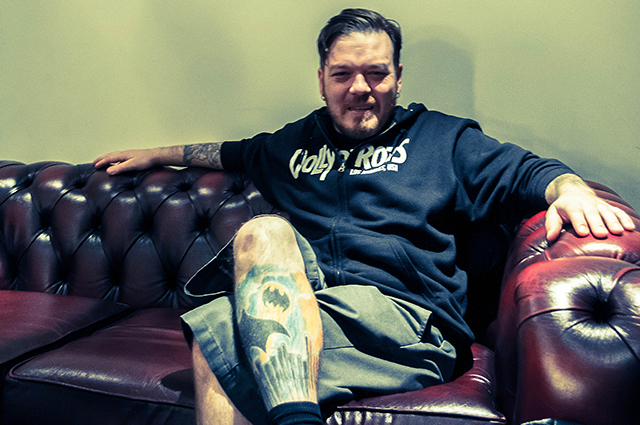 Can you believe the One Big Happy Tour marks Bowling For Soup’s 30th visit to the UK? That’s an impressive number – even for a band who have been together for eighteen years – but not hard to believe if you’ve ever seen them live.

Ahead of their full band show at the O2 Academy in Leeds, I sat down for a chat with bassist Erik Chandler to find out how the UK and the US compare, to quiz him on his British slang (as is tradition) and to find out if the end is in sight for Bowling For Soup… dun dun duuuuun!

This is your 30th visit to the uk!
This is our 30th visit.
That’s insane, we don’t often invite people back that many times, we’re very fickle. You must be doing something right…
People are still buying tickets so I suppose something is going correctly. I cant explain exactly what it is, but something’s right.

How do the UK shows and the US shows compare?
The UK audience is just a completely different animal – not that we don’t have a loyal fanbase in the US, but it’s just two different kinds of shows. Over here it’s much more of a community in the audience, people come to shows to be together and enjoy the whole thing rather than in the states where you go by yourself, or your three friends, and you stand with your arms crossed and you bob your head and you have a good time, but over here it’s like the entire room is together and it’s just much more of a group thing than in is in the States.

In honour of your new track, Let’s Go to the Pub, where do you think has the better pubs – here or in the US?
Forgive me for saying this, I like them [in the US] better because they’re closer to home [laughs]. I love the pubs here, I enjoy the pub culture that’s a very big part of the society here. The area where I live in Dallas  is similar. I think I tend to go out to the pubs more just because I know that I’m going to run into the same folks. I sleep late, so at four o’clock in the afternoon I can grab lunch – technically breakfast – and a couple of beers, and I know that I’m going to run into the same group of people. I live in a great area and there are ten or twelve places within a few blocks so it’s like, where do I want to go today? You can go, have great food, a few beers and know that you’re going to run into people you know – the area where I live is largely populated with musicians and people that are involved with the Dallas music scene, so it’s cool to just get out and socialise.

You guys have been together so long now, what inspires you do keep writing such fun songs?
We enjoy life. There are definitely two sides to Bowling For Soup, there’s the fun and jokey side and the serious side. We’ve got songs that reflect both. We just enjoy what we do and we actually like each other, after eighteen years of doing this we’ve still managed to remain amazing friends.

Well, my next question was going to be, what is the secret to a long and happy band life?
We like each other and we enjoy what we do, that’s the biggest secret. We always said that we’re going to do this until it’s not fun anymore, and eighteen years in it’s still fun and we all get along so why quit now?

So there’s never any talk of calling it a day?
No, not at all. I can’t say that Bowling For Soup will be around for another ten years, but for another three or five… there’s no end in sight right now. I know that we’re going to hit the twenty year mark, that’s said and done, but beyond that… ahhh, who knows? We’ve got no plans to quit, and we’ve got plans for more albums so no one has to worry about anything right now. It’s one of those things where, I don’t know that we will actually break up, it might just be the extended hiatus.

As is tradition, I have some new British slang words to quiz you with. Do you know what a tosser is?
A tosser is an asshole.
Yes. If you give someone a bell…
I don’t know that one.
It’s a phone call. Do you know what knackered means?
Drunk?
Tired. Do you know what it means to go arse over tit?
Like head over heels, tripping.
Yes. What would we be referring to if we said meat and two veg?
Meat and two veg? It sounds like a great meal.
[insistently] No!
[laughing ] What is it?
The male genitals.
Oh… oh! I’m normally really good at this.
Do you still remember what dogging is?
That’s the random sex, finding a parking lot, flashing the lights and seeing who comes up.
To be honest, that’s the only one you need to remember.

Click here to read our One Big Happy Tour review.