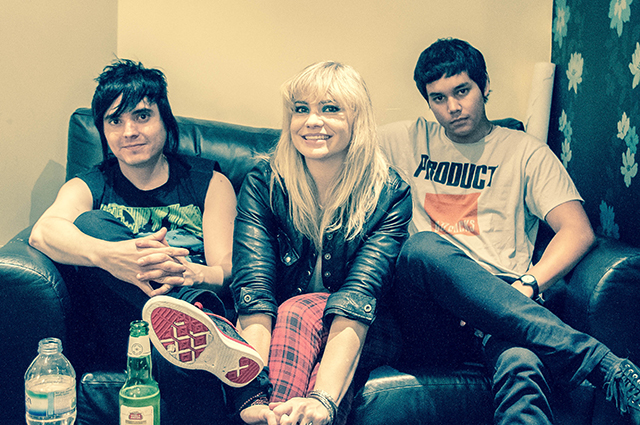 Ahead of their One Big Happy show with Bowling For Soup and Patent Pending in Leeds, we hung out with Kelly Ogden and Luis Cabezas – AKA The Dollyrots – to chat about what it’s like touring with Bowling For Soup, their plans for future and to quiz them on their British slang.

What is it like touring with Bowling For Soup? We get the impression you guys are like a family unit.
Kelly: Very much so. We’ve been touring with them for a few years now, a lot in the states, and we first came over to the UK with them in 2010. It’s just like hanging out with your best friends every day, and you get to play a show and watch a show. We all take care of each other and it’s a real positive environment. There’s no strange drama or weird things – even when things get crazy, we all just take care of each other. It is a family… one big happy!

Ah, I see what you did there. BFS have a reputation for being party animals, can you guys keep up with them?
Kelly: Honestly, no.
Luis: I think we’ve gotten better at keeping up with them over the years. When we first met them we were pretty impressed by how much they could put away.
Kelly: The first night that we played with them was in Birmingham (Alabama) and we walked into the dressing room backstage and there were these two coolers, like the one in here [waist height] times two, filled completely with Miller Lite and we were like, ‘Who the hell is all that for? There are only two bands playing.’
Luis: There was like, 50-something beers, and we were like, ‘ No way! There are two bands and we’re only a three-piece, they’re only a four-piece…’
Kelly: Yeah, there’s no way… and then we had to get more beer.
Luis: We just try to keep up, but everything is really positive. Everyone parties, but everyone does it in a way that feels fun.
Kelly: If you don’t feel like drinking, it’s not like they make you. It’s not a frat house.

We love the One Big Happy album that you made with Bowling For Soup and Patent Pending, what was it like covering each other’s songs? Did you feel the pressure?
Kelly: Yeah, it’s kind of scary. We did a split 7” with them and we did High School Never Ends and they did our song Because I’m Awesome, and when you really like a band and you like the song doing a cover of it is the biggest compliment but you really don’t want to screw it up because then it’s really embarrassing. We really wanted to do The Bitch Song but it’s a classic, perfect song – how are you going to do that?
Luis: We all decided what song by the other two bands we wanted to do which allowed everyone to pick their favourite and that’s why it turned out amazingly – it was a really good idea on Jaret’s [Reddick] part. I think the main reason it turned out as well as it did is because we all love each other’s music and I think it showed.

Do you have a favourite track from the album?
Kelly: I love Love Ya, because it was really fun to do that.
Luis: I really like the original that we did, the main reason for that being that we co-wrote it with Jaret. We actually wrote it a year ago, so it has been waiting to be used for something. It was perfect timing.

How do UK crowds compare to US crowds?
Kelly: It differs by town. It’s a really small country, but somehow every place has its own identity.
Luis: It’s like the US condensed into a smaller area because you can go one place and the reaction is insanely good and then you can go to another place…
Kelly:… and they just kind of stare.
Luis: I think in general people here feel free to express their opinion a little more, so when people really like you, they really like you, and when they don’t like you they really don’t like you. I think we appreciate that honesty. That’s the way it should be.
Kelly: It’s kind of different for us too because Patent Pending are like a young Bowling For Soup, they do a lot of jumping and Joe [Ragosta] is an incredible front-man – the kind of music they play, and that Bowling For Soup play, is kind of different from what we do, we’re a rock band, so it’s a little bit different to be sandwiched in the middle of those two.
Luis: It’s good though, because it gives the show variety. We’re more old school in our approach and our influences – but it’s all punk and we all put on a punk show, so it’s good, it goes together.

What are you working on after the tour?
Luis: We just put out a record in the UK which came out the same day as One Big Happy, so we’re going to see what happens with that and we’ll probably do some more dates in the US.
Kelly: We flew in and out of New York, and we live in California, so we’ve been on tour over a month because we toured all the way out and we’ll tour back all the way home.
Luis: We’ll probably be writing.
Kelly: Then the holidays come and the snow comes so we won’t be touring then.
Luis: We’ll do a Christmas song, something for the holidays.

We have a bit of a tradition going with Bowling For Soup and their support bands where we quiz them on their British slang.
Kelly: Great!
Luis: I’m gonna fail this so bad!
Have you heard any words while you’ve been here that are new to you?
Kelly: I just know that I don’t know what people are saying every now and then. I understand maybe three out of five words in a sentence.
Luis: It kind of just goes over your head, I don’t even remember not knowing. It’s like a different language – it’s supposed to be English! It’s not the same at all.
The first word is guff.
Luis: Is that like rough?
Kelly: Like, standoff-ish?
Luis: Is it genitalia?
It’s something you do.
Luis: Is it fucking somebody?
To guff is to fart.
Kelly: That’s a good one, we’ll find a use for that.
Do you guys call it farting?
Kelly: Yes, or pass gas.
That sounds much nicer. Do you know what bird means?
Kelly: A girl.
Correct.
Kelly: Yey! I got one.
We always have to ask this one, because Bowling For Soup brought it up! Do you know what dogging is?
Kelly: It’s doing it, right?
Yeah, although there’s a little more to it…
Kelly: I do know this because this was explained to me a couple of weeks ago. It’s like parking…
That’s the one…
Luis: [to Kelly, in shock] You know this?!
Kelly: Yeah, it’s coming back. It’s where you go to a park… it’s soliciting sex?
It’s where you have sex in semi-public places and kind of all watch each other.
Kelly: Yeah!
Luis: [in total shock] They what?!
Kelly: Yeah, it’s like group sex, voyeuristic…
Luis: [still amazed] What?! People do that here?
Kelly: Have you guys ever done it?
No no no! Do you know what a cock up is?
Luis: A cock up?
It’s a mistake.
Kelly: Oh, we say fuck up.
If something is the dog’s bollocks, what is it?
Kelly: It’s a good thing, right?
Correct.
Kelly: I made a mistake with British slang recently on Twitter. I said, ‘I’m just so bummed’…
Ah!
Kelly:… it came up with like ten people saying, ‘No, don’t say that, it doesn’t mean you’re sad, it means something else here.’
What about if you give someone a bell?
Kelly: A call?
Yes!
Luis: I’d never get that.
Do you know what a tosser is?
Kelly: An idiot?
Yes! You’re awesome at this.