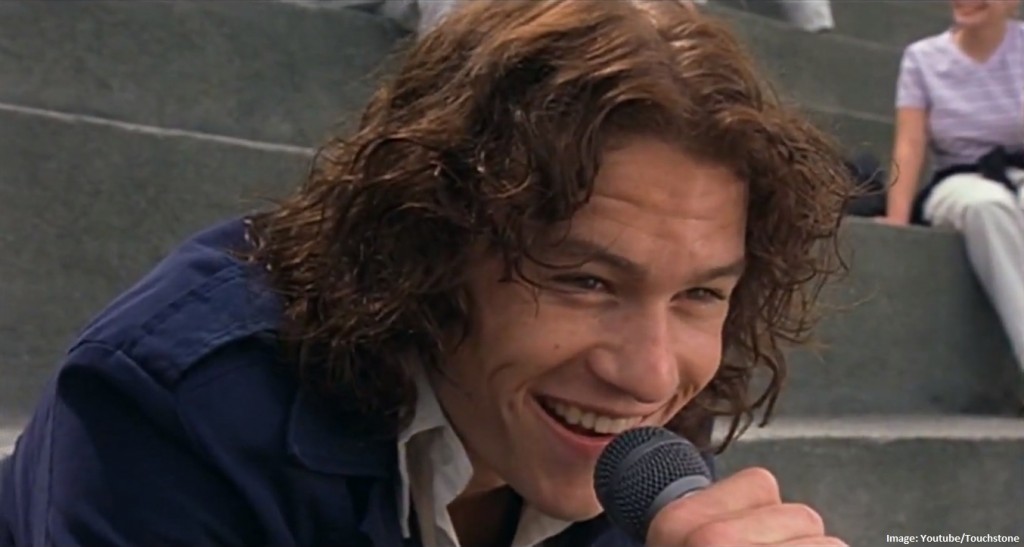 If you spent your impressionable pre-teen/teenage years watching romantic comedies circa 1995-2005, then you were screwed over, my friend.

If you came of age watching the likes of Clueless, 10 Things I Hate About You, She’s All That, Drive Me Crazy and countless other chick movies, then all you will have to show for it are some unrealistic ideas about life, love and sex, and a crush on Freddie Prinze Jr that will stand the test of time.

Realistic or not, these films have taught me a lot over the past seventeen years since Clueless was released, and these things have to be true because they are apparent in some if not all of my favourite flicks. Here’s what I’ve learned…

True love always begins with an ulterior motive.
Notable examples: She’s All That, Drive Me Crazy, 10 Things I Hate About You

You’re never going to just meet the boy of your dreams and fall in love, that’s far too simple. Instead, said boy needs some kind of extra incentive to date you and while he’s pretending he’ll realise he is actually madly in love with you – isn’t that romantic? This does make us slightly suspicious, if you meet a guy and he seems wonderful you’re going to start thinking, ‘Why is he being so nice to me? What’s in it for him?’ – thankfully it doesn’t matter, because whether he’s Freddie Prinze Jr doing it for a bet, Heath Ledger doing it for money or Adrian Grenier doing it to make his ex-girlfriend jealous, ultimately they will fall in love with you and you will forgive their betrayal. Which brings me on to my next point…

Anything is forgivable.
Notable examples: She’s All That, 10 Things I Hate About You, Drive Me Crazy

You can forgive just about anyone for just about anything, you know. Let’s say Heath Ledger goes out of his way to date you, you finally give in and then you find out that he not only did it for money, but so that some tosser could have sex with your sister – that’s pretty unforgivable, right? Wrong. All it really takes to achieve true forgiveness is a pretty awesome music number and a guitar (and then there’s always drums, and bass, and maybe even one day a tambourine). I have to admit, I’d forgive anyone who performed a cover of Frankie Valli’s hit, Can’t Take My Eyes Off You for me in a public place.

Makeovers are easy – anyone can be beautiful.
Notable examples: Never Been Kissed, Miss Congeniality, The Princess Diaries, She’s All That, Drive Me Crazy, Clueless

There are no ugly people in the world, only people who wear glasses, don’t pluck their eyebrows, don’t straighten their hair and don’t wear enough make-up. If you do all of these things, you will be stunning. It’s ok if you didn’t realise this, because usually you need to find out you’re royalty, go undercover at a beauty pageant or be called Josie Grossie throughout your years at high school before you can do something about it.

Isn’t life crap? Don’t you wish you had someone else’s life? Well be careful what you wish for, because you may think other people have it easy but soon enough you and your mother will be waking up in each other’s bodies and running into each other to try and swap back. This will not work, you will have to learn the hard way that no one really has it easy – only then will you realise that your life was actually pretty great.

Shit will hitith the fan… ith at the school dance.
Notable examples: She’s All That, Never Been Kissed, 10 Things I Hate About You, Drive Me Crazy

Ah, the prom. If rom-coms are to be believed, your high school prom is the most important event in your life, nothing will ever top your high school prom. Of course, there will always be people who don’t want to go, but they secretly do want to go and they will go, and when they’re there, well that’s when all the drama will happen. Secrets come out, fights kick off, couples make up and break up and if you’re an undercover reporter, this will become public knowledge.

Singing and dancing are part of day-to-day life.
Notable examples: Freaky Friday, Get Over It, 13 Going On 30, Mean Girls, How To Lose A Guy In 10 Days, 10 Things I Hate About You, The Sweetest Thing

Long before High School Musical came out, people were singing and dancing for love because singing and dancing are a part of life, and skills that will absolutely get you a boyfriend/girlfriend. It doesn’t really matter if you can sing or dance, as long as you try. So go for it, sing for forgiveness, dance to Thriller to liven up the party your magazine is throwing or audition for the school play to impress a chick – what could possibly go wrong? Oh, and another thing worth knowing, if you and your two best friends go to a Chinese restaurant and start singing about penises, everyone will join in.

The guy/girl you think you want is actually all wrong for you.
Notable examples: Drive Me Crazy, 10 Things I Hate About You, Get Over It, Never Been Kissed, Clueless

Y’know that person you have a crush on? They’re wrong for you. Just give it time and you will realise that. Like, you may have a crush on the hottest boy in school, but know that he will invite you to the prom, only to pull up outside your house and throw eggs at you. Your true love will only enter your life at a later date – usually after someone pays him/makes a bet with him/dumps him. Also, know that if they are a better dresser than you they are possibly gay and that’s why they won’t sleep with you, even though you had something baking in the oven.

Things aren’t always what they seem.
Notable examples: Notting Hill, There’s Something About Mary, She’s All That

Things are not always what they seem, and this can be the case with the big things or the little things in life. You may think the school jock is a terrible person, but if he sees a pair of bullies trying to trick your little brother into eating a pizza covered in pubic hair, he will teach those bullies a lesson. Of course the little things aren’t always what they seem either, you may think that’s hair gel stuck to your dates ear, but it’s not, it’s spunk, and you may think that’s yogurt you’re eating, but it’s not, it’s mayonnaise.

True love is usually right under your nose.
Notable examples: Drive Me Crazy, Clueless, 13 Going On 30

If you’re having trouble finding the boy/girl of your dreams then you might want to look a little closer to home, because true love is usually right underneath your nose. In 13 Going On 30, Jenna needs a glimpse of her future to realise that her best friend and next door neighbour is the guy for her, in Drive Me Crazy next door neighbours Nicole and Chase have to pretend to be a couple before they realise they are made for each other and in Clueless, despite having nothing in common, it is her stepbrother Josh who Cher ends up with.

There isn’t much worse than being a virgin who can’t drive.
Notable examples: Clueless, Mean Girls, She’s All That

“You’re a virgin who can’t drive.” – ouch, is there anything worse? Possibly being called a home-schooled jungle freak, who is a less hot version of someone else. Girls can be so mean. And if all else fails, all it will take is someone spilling a drink down your dress and saying “you’re not going to cry, are you?” to make you burst into tears.