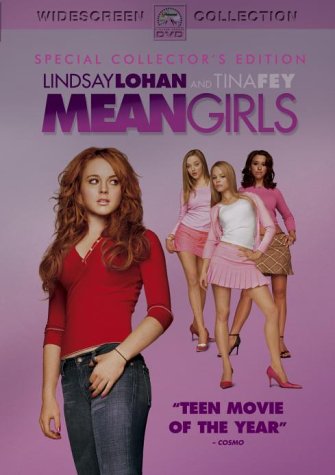 If you were in your teens around the time comedy-drama Mean Girls was released in 2004 then you’ll know just what a masterpiece it really is.

The flick, starring Lindsay Lohan and Rachel McAdams, is actually a pretty accurate insight into female social cliques that operate in high/secondary schools.

Our generation had (and still do have) a whole bunch of problems to contend with – especially when it comes to competing with the same sex – and to be honest, unless you’re living it, you know about as much as a homeschooled jungle freak does on the matter.

Here are the things I learned from Mean Girls, and how they shape my everyday life…

Yes, it can be hard to get the attention of the boy you like, but he should like you for you and not who you pretend to be. When Cady needs an excuse to talk to Aaron she decides to take drastic measures – she pretends to be bad at maths so that Aaron can tutor her… but she’s actually good at maths, Aaron is bad at maths. Naturally when Aaron finds this out he is furious at Cady for lying and trying to manipulate him. The bottom line? Don’t dumb yourself down for a man and be proud of your intelligence – joining the Mathletes is not social suicide.

Don’t call each other sluts and whores.

One of the main messages in Mean Girls is that girls have to stop calling each other sluts and whores, because it only makes it ok for guys to call girls sluts and whores. With pretty much everyone being called one of the other at some point in their life, it’s a classic case of treat others how you wish to be treated yourselves. Calling other people names only opens the door for people to call you names right back.

It doesn’t matter if you were half a virgin when you met your boyfriend.

It doesn’t matter if you were half a virgin (or 100% virgin) when you met your boyfriend, he will still dump you if you treat him badly. That’s what happened with Regina and Aaron – as soon as he found out that she was hooking up with Shane Oman in the projection room above the auditorium every Thursday he dumped her – virginity didn’t even come into it. The bottom line? Don’t cheat on people, they really don’t like it.

Don’t have sex, because you will get pregnant and die!

Halloween is the one night a year when a girl can dress like a total slut and no other girls can say anything about it.

In the regular world, Halloween is when children dress up in costumes and beg for candy… in girl world, Halloween is the one night a year when a girl can dress like a total slut and no other girls can say anything about it.
Scary is out, slutty is in. Have you seen how they treat Cady whens he turns up to the Halloween party looking scary? They think she is a boy! So just know that on Halloween that you can get into the spirit of things by flashing some flesh, and no one will judge you for it… although, if you want to be scary that’s ok too.

‘Fetch’ is never going to happen.

You can’t just decide that a word is slang and hope that it will catch on – especially if the word in question is ‘fetch’. Despite Gretchen’s use of the word, and even though she insisted it was slang from England, ‘fetch’ just never happened and Regina wasn’t afraid to tell her that it was never going to happen. When the film first came out girls all over the world started using the word ‘fetch’ and even with the success of the movie it still didn’t happen. The moral of the story? Don’t try and force things just to be cool.

It will always be weird seeing a teacher outside of school.

This was true when I was at school and it’s still true to this day – there’s something weird about seeing a teacher outside of school, it’s like seeing a dog walk on its hind legs. Just like when Cady, Janis and Damian bump into Ms Norbury, it’s never going to feel right seeing teachers as normal human beings who go to the mall, hang out in bars and take their wig off when they’re drunk.

There are two kinds of evil people.

There aren’t just good and evil people in the world. There are actually two kinds of evil people – people who do evil stuff, and people who see evil stuff being done and don’t try to stop it. It’s not enough to just be a good person, if you know that something terrible is happening and you don’t do anything to stop it then you’re just as bad. The moral? Help each other, don’t turn a blind eye.

Fashion is complicated, and the things we wear say a lot about us. In Mean Girls there are fashion rules – like wearing pink on Wednesdays, not wearing a tank top two days in a row and only wearing you hair in a ponytail one day a week – and if you break them you will suffer the consequences. Like when Regina wore sweatpants on a Monday, she couldn’t sit at the same table as her fellow Plastics. The bottom line? Even if you don’t have a strict dress code to follow, always think about what you are wearing and put effort into your appearance.