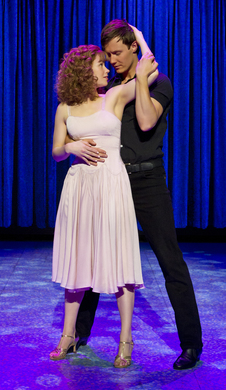 “Sorry for the interruption, folks, but I always do the last dance of the season…”

With songs from its soundtrack so regularly overplayed just before last orders at questionably cheesy bars and clubs, it’s easy to forget just how lovable the music from Dirty Dancing really is. Thankfully, Eleahnor Bergstein’s smash-hit West End musical has finally premiered in Edinburgh, reminding us all of just how good it really is when played in its intended context.

Set in the 1960’s, the legendary musical not only tells the quintessential young love story but also tastefully tackles a number of controversial social issues such as class, rebellion and  abortion. “Baby” Houseman meets rebellious working-class dance tutor Johnny Castle whilst at a summer holiday camp called Kellerman’s with her well-to-do family. Intrigued by both Johnny and his fellow dancers, she soon finds herself embodied in their world and rehearsing risqué dance numbers behind her family’s back in order to temporarily fill-in as his dance partner.

Whilst the dazzling stage show managed to stay remarkably true to the original cult film, additional scenes allowed for the welcome development of some supporting characters such as Baby’s parents and her sister Lisa. Amazing stage technology also meant that iconic scenes (such as the one in which Baby and Johnny practice the lift section of their dance in a lake) were translated faultlessly from the screen to the stage.

Despite initially lacking a believable physical resemblance to Patrick Swayze, Paul-Michael Jones managed to flawlessly morph himself into the role of Johnny Castle through his dynamic delivery of spot-on dance-moves and subtle mannerisms – a clear testament to how hard he must have studied for the role. Despite dancing about the stage in tight trousers and plat formed shoes, he had an unmistakable air of masculinity about him which meant every hip jolt, every wiggle and every shake provoked enthusiastic whistles and cheers from the rowdy audience. Jill Winternitz was equally fantastic at portraying the goofily charming yet head-strong lead role of Baby whilst Emelia Williams provided some of the evening’s best comedic moments through her portrayal of Baby’s quirky older sister Lisa.

A fantastic stage adaption of a classic film that is truly worth the hype that surrounded it’s arrival in the capital.

Dirty Dancing is on at The Playhouse, Edinburgh until Saturday 12th January 2013. For tickets or more information, please visit www.atgtickets.com or www.dirtydancingontour.com