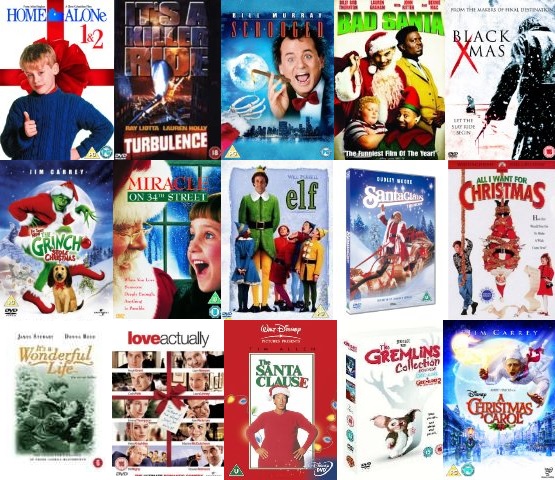 It’s the most wonderful time of the year… we’re eating festive food, listening to festive music and watching a sack-load of festive films.

We’re making the most of the festive season by surviving on a diet mainly consisting of turkey, cranberries, gingerbread and (specifically) advent calender chocolate, refusing to listen to music that isn’t companied by a video full of snow and cheer, and watching movies, lots and lots of movies.

While we’re open to watching pretty much any film with so much as a snowflake in, there are a few movies that we simply have to watch every year.

So grab a mince pie and a gingerbread latte, sit back, and check out our questionable taste in festive flicks.

In at fifteen we have Disney’s take on Charles Dickens’ classic Christmas tale, A Christmas Carol. The film – with characters voiced by the likes of Jim Carrey, Gary Oldman and Colin Firth – was released in eye-popping 3D, boasting some of the best stereoscopic scenes we have ever seen. It’s also quite disturbing for a film aimed at kids – we were scared.

Speaking of disturbing… in at fourteen we have Gremlins and Gremlins 2, because we cannot watch one without the other. The terrifying yet hilarious tale of a young man with a strange pet. Whether we’re cooing at Gizmo or laughing at what the actually quite terrifying Gremlins get up to, we’re loving it.

For our number thirteen we’re going back to 1994, for that Tim Allen masterpiece, The Santa Clause. It may well be the reason an entire generation of kids spell Santa Claus wrong, but what a wonderful film it is. Yep, until they abused it by making two more that lacked the magic of the original, the tale of a man who essentially kills Santa and then has to take his place is one that we’ve loved from a very young age.

In at twelve, we have a little love – a collection of love stories that as teens we saw at the cinema four times (not quite a record, we saw Pirates of the Caribbean no less than five times). The film explores ten romantic (and often complicated tales) that somehow all tie together, all occurring around the most wonderful time of the year. It’s funny, it’s sweet, it’s easy to shed a few tears over, and it’s full of eyecandy – we’re looking at you Colin Firth, Hugh Grant and Andrew Lincoln.

We’ve got a true classic for you at number eleven – the oldest flick on our list, It’s A Wonderful Life (1939). It’s not only a wonderful Christmas film, by most it’s considered one of the greatest films ever made. A man is on the brink of ending his own life, causing an intervention by his guardian angel. It’s a tale that has been borrowed by so many TV shows, from Rugrats to The Fresh Prince of Bel Air, and one that warms us every year.

10. All I Want For Christmas

Another 90’s hit, this time from 1991, we’ve got All I Want For Christmas at number ten. The film stars Lauren Bacall, as well as a young Ethan Randall and an even younger Thora Birch. The stories tells the tale of two kids who scheme to get their parents back together in time for Christmas. It’s funny, it’s cute and it stars the late, great Leslie Nielsen as Santa.

Yet another hit from our childhood, Santa Claus from 1985. The film not only tells the tale of how Santa Claus came to be, we also meet elf Patch (played by Dudley Moore) who decides to go it alone in the toy world, getting caught up with an evil toy manufacturer who wants to get rid of Santa for good.

Time for a more modern hit, in at eight we have Elf. Not only does the flick star hot acting property Will Ferrell, it also boasts New Girl’s Zooey Deschanel and legend James Caan on the cast list. Giant elf, Buddy, sets off for New York in search of his real father – who happens to be on Santa’s naughty list, uh-oh! It’s one of those films where you cannot stop smiling throughout, not for a second.

Dylan McDermott – that’s all you need to know about this flick. If I must go on, the Miracle On 34th Street 1994 remake was written and produced by John Hughes, so now you have two solid reasons to watch it. With six-year-old Susan Walker’s mum telling her that Santa doesn’t exist, and their hot neighbour telling her that he does, it’s only when Susan meets a store Santa claiming to be the real deal that she makes an almost impossible request for Christmas, saying she’ll believe if she gets it. If Christmas worked like that, I’d have Matthew McConaughey under my tree. When Santa gets caught up in a trial and has to prove that he is Santa, will he be freed in time for Christmas?

The… the… the… The Grinch! The festive flick is based on the book How the Grinch Stole Christmas by the awesome Dr. Seuss, and if there’s one thing we love at Flecking, it’s the weird and wonderful work of Dr. Seuss. Inside a snowflake exists the magical land of Whoville, and in Whoville live the Whos, and the Whos just love Christmas. But just outside the joyful town lives The Grinch, and he hates Christmas… so much so that he decides to steal it. The 2000 film stars Jim Carrey and Taylor Momsen before she got all nearly-naked and scary.

Black Christmas 2006 is a remake of a 1974 flick of the same name. Black Christmas is a little different from your usual holiday viewing, being a typical teenage stalk and slash flick about a group of sorority sisters who are murdered by one of their house’s former inhabitants during a winter storm. The murderer on the lose is Billy Lenz, who escapes from the mental asylum where he ended up as a child after murdering his horrible mother, her boyfriend and violently attacking his sister… who is also his daughter. Lovely festive viewing that has everything you love about Christmas – incest, inbreeding, blood, guts and teenagers who simply refuse to stick together and find safety when bad stuff is going down.

Another choice that is far from family friendly, Bad Santa follows the life of Willie Stokes (Billy Bob Thornton) who, along with his dwarf friend, Marcus, poses as Santa every year so that they can rob apartment stores. Willie is not your typical happy Santa, with a love for the holidays and spreading cheer to the children, oh no. Willie is a waster, obsessed with the three Bs – booze, bullshit and a third one that I’ll leave to the imagination. When Willie meets a strange boy who lives with his strange grandma, he tells him that he is the real Santa so that he can stay at his house. An absolutely hilarious Christmas must-watch.

We all love Charles Dickens’ classic Christmas tale, A Christmas Carol… but have we learned a lesson from it? Sadly not, there are still Scrooges all over the world. The times and names may change, but the attitude remains the same, bah, humbug! Even though it’s been 24 years since Scrooged came out, it’s still a lot easier for our generation to relate to than the original, giving us all a second chance to avoid being visited by the three ghosts. The flick, starring the legend that is Bill Murray, tells the story of Frank Cross, a cynical television programming executive who has found great success and wealth, but only by becoming cold-hearted and cruel. In time-honoured tradition, Frank is visited by three ghosts… but will it change him? Watch it now, and every Christmas for the rest of your life.

Now here’s a film that you don’t often see in festive top movie lists, but just look at me, placing it in the prestigious number two spot. Turbulence is another alternative Christmas tale, you’ve guessed it, set on an airplane. Sometimes you want the festive the cheer, the snow, the turkey, the pretty lights and Santa Claus during the festive season, but sometimes you want criminals let lose on a plane, hostages, murder and a young, sexy Ray Liotta. Packed full of action, suspense and twists that will leave you in knots until New Year’s Eve at the least.

And so, our favourite festive film of all time is… technically two festive films, Home Alone and Home Alone 2. Like Gremlins, we can’t watch the first instalment of the Christmas classic without watching the sequel – just the one, because as far as we’re concerned, there were no others after 2. Home Alone, the film that Macaulay Culkin is most famous for, actually made being abandoned by your family and having your house burgled actually look like the most fun you could ever have during the festive season…. well, a close second after being trapped on a plane with Ray Liotta. For a dose of festive magic and laughs, watch 1 and 2 back to back this Christmas.