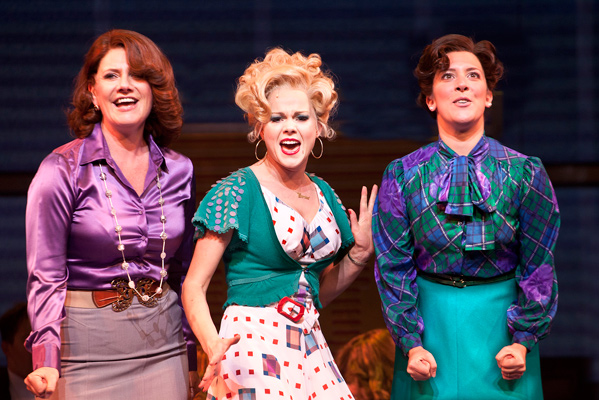 Musicals don’t come much spunkier or more colourful than 9 to 5, the hilarious stage production based around Dolly Parton’s most renowned hit song and the 1970’s film of the same name. Telling the story of three gutsy office workers who take their sexist and egotistical boss hostage whilst they attempt to unearth enough evidence of his dodgy business dealings to send him to jail, the popular show makes for a fun and mischievous girls night out. Playing extra shows in Glasgow until 12 January due to unprecedented demand, it’s an absolute must-see for anyone looking for some light-hearted escapism from their own 9 to 5 job.

Set in 1979 when managers were men, big hairdos were in and punk was out, the show provides a nostalgic look back to the Seventies whilst lightly touching on pressing social matters such as feminism and workers’ rights. The songs work well in a musical theatre setting and the appropriate balance between music and dialogue makes the story incredibly easy to follow – even for those who are completely unfamiliar with the film.

Natalie Casey is fantastic as Judy Bernley, the awkward office newbie who has never worked a day in her life. Coming across as sweet and naïve whilst slightly unstable since the breakdown of her oppressive marriage, she portrays the role in an incredibly likeable and humorous manner. Amy Lennox and Jackie Clune are equally as good as fellow leads Doralee Rhodes and Violet Newstead (respectively), but it is musical theatre veteran Bonnie Langford who shines the brightest and commands the biggest cheers from the audience in her supporting role as Roz Keith, the boss’s personal assistant. She is particularly impressive during her comedic and suggestive solo number Heart to Hart, during which she shows off her amazing dancing abilities. Ben Richards tackles the role of Franklyn J Hart with enthusiasm but it is, unfortunately, his undeniably strong vocals alone that manage to save his performance from coming across as a pantomime villain portrayal.

Empowering, fun and slightly tacky, 9 to 5 is by no means the next big classic musical. Having only lasted a mere six months on Broadway, it suits its current incarnation as a touring production down to a tee and casual musical theatre fans will love it for its cheerful and feel-good nature.

For more information or to book tickets, visit www.9to5themusical.co.uk