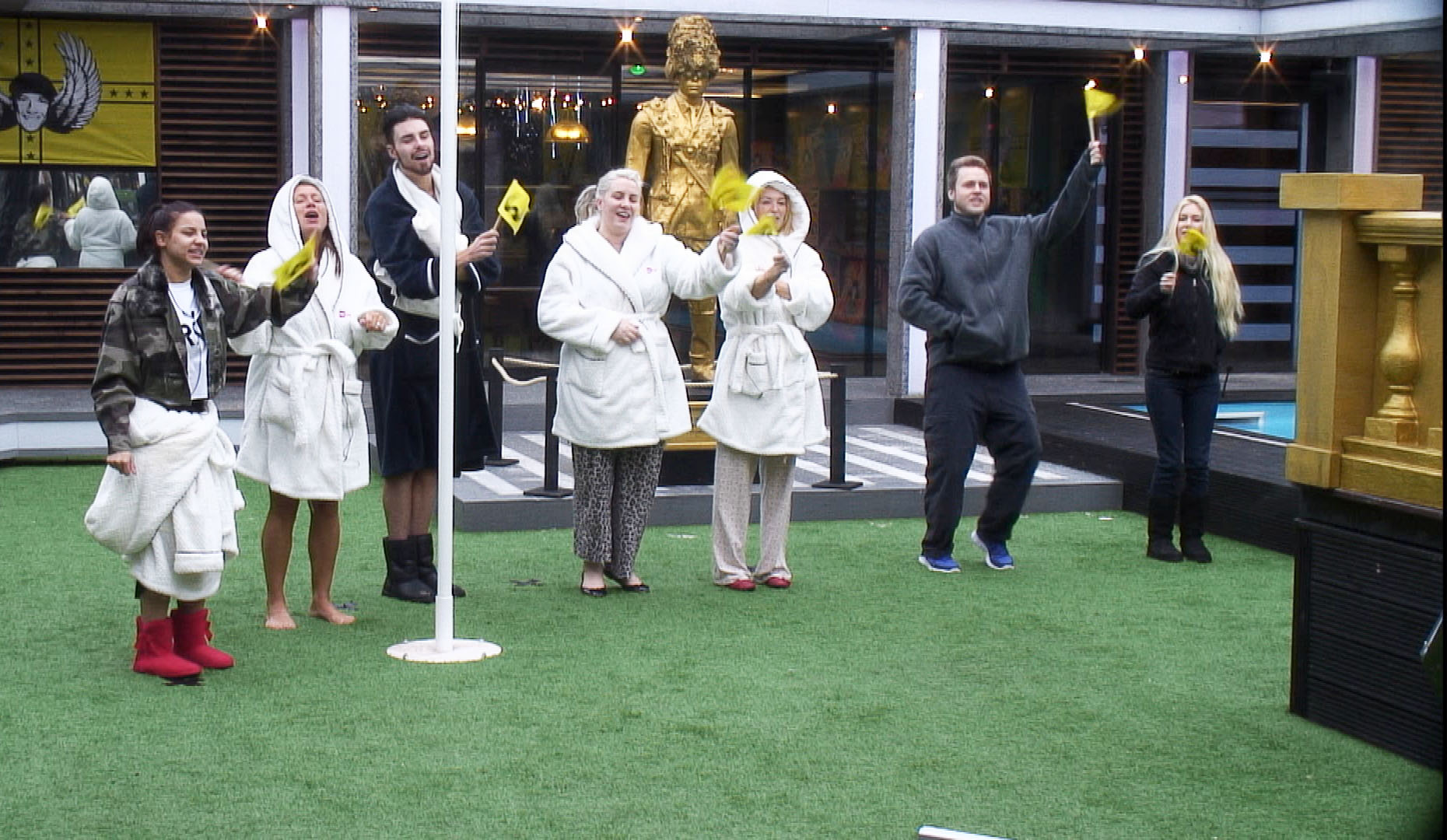 While housemates were sleeping peacefully, they were unaware that the house was about to be run under a new regime. Military music plays into the house as housemates awake. Rylan looks into the garden and notices a few changes, “Frankie, your face is everywhere,” he points out. Razor laughs as he notices the flag and statue bearing Frankie’s image. “I’m the emperor,” Frankie declares. Spencer notices the golden statue in the garden and speculates that it may be a real person, “Those guys in LA can stand for hours,” he remarks.

For this weeks shopping task, Frankie will be come a powerful dictator and rule the house. Housemates have been gathered on the sofa. “This will go right to his head,” Rylan quips as Big Brother addresses the house then Frankie appears on screen in full regalia. When he has finished his address Rylan continues, “He’s gonna turn into a right horrible b*****d.” Frankie chooses Razor and Ryan to be his Royal Guards and they rush to the diary room to get changed into their uniforms. As they return to the diary room Tricia tells housemate that the trio looks “scary.”

Some of the housemates are in the garden waving flags and cheering the arrival of Dictator Frankie. His guards transport him in his special carriage over to his podium and he addresses the housemates.

A while later, Rylan is lying on his bed and Ryan walks over and informs him that: “Your Excellency would like all of your cigarettes,” and tells Rylan that if he has anything to say he should speak to one of the guards. Rylan looks stunned and reluctantly hands over all his cigarettes. Ryan tells him that his “cooperation has been noted.” “He’s just making these rules up,” Rylan scoffs. Frankie is speaking to Big Brother in the Golden Palace. He is told that Big Brother thinks he is an “excellent Dictator,” and Frankie smiles.

The Dictator and his guards are in the garden. Razor goes into the house and tells Rylan that the Dictator would like him to join him for a cigarette. Rylan follows Razor outside and is reminded that he must not speak directly to the Dictator, but via his guards. “I think his Excellency looks absolutely beautiful,” Rylan comments. Razor relays this to Frankie and tells Rylan, “His Excellency laughed.” “Let him know that if he ever needs a cheeky wristy,” Rylan smiles.

Guards Razor and Rylan are looking away the housemates’ make-up. Gillian brings Razor her moisturiser and lip balm. She mentions that she has dry lips and Razor returns the balm. When Gillian leaves he tells Ryan that he will keep the moisturizer as a “perk of the job.” In the bedroom, Heidi tells Spencer that the task is “fun” but wouldn’t be that way if anyone else was the Dictator. Spencer corrects her stressing the works “D**k-tator.”

In the kitchen, food has been delivered for the housemates. “This will be all stuff I can’t eat,” Rylan moans. Claire goes into the diary room and tells Big Brother that the unlabelled canned food that has been provided could be either “dog food or cat food.” In the kitchen Rylan is increasingly worried about the food they have been given. “They wouldn’t give us cats to eat (would they)?” he questions and likens the look of it to “s**t.” Lacey begins to wretch at the thought, rushes into the bedroom and rushes to the toilet.

Snack rations have been delivered to the house. Rylan still refuses to eat. Big Brother announces that the Dictator’s roast dinner is ready to be collected for the guards. Razor and Ryan collect the meals and pass by the housemates. “Can I smell it,” pleads Lacey.

Spencer and Heidi are in the bedroom declaring their love for each other amongst the oppressive regime. Big Brother calls Rylan to the diary room to discuss and important matter. In the diary room Brother informs Rylan that he will be in Leader of the Revolution and help Big Brother regain control of the house. Rylan worries that the other housemates may not comply, “Cathy Beale will be like ‘no, we can’t do that,’” Rylan remarks. Big Brother tells him that his first task will be to get himself sent to jail in order to steal the explosives that are hidden in there. He must eventually use the explosives to destroy the statue of Dictator Frankie. “Let’s bring the little man down!” Rylan chants.

Frankie is in the smoking area. Rylan is in the living area explaining the rules of the Revolution and explains that this is the real task and therefore, housemates must pass it in order to win a luxury shopping budget.

His Excellency has summoned his people to the garden where they must pledge allegiance to his mighty regime. The housemates take it in turn to dish out the compliments, “You’re such a superstar,” Heidi beams, “You’re a joy to wake up to,” adds Gillian. Next up is Rylan who starts by saying, “I absolutely loved you.” He adds: “I think you’re a great leader and your hat is taller than you, you’re out of order for taking away our stuff.” He tells Dictator Frankie to “stick your riding crop up you’re a**e,” and receives boos from his fellow housemates. Rylan is banished to jail.

Five minutes later Rylan is preparing to go to jail for his actions but is allowed one cigarette beforehand. “Come back with a different attitude, we need to pass this,” Lacey warns Rylan. At the smoking area Rylan tells Razor that he lost his temper as he was “just so hungry.” In the living area, Claire suggests that the other housemates keep Heidi and Spencer out of the picture as they may want to sabotage the task.

Frankie and Razor are talking in the dictator’s palace. “You f***king love this,” Razor grins. In the garden Rylan is attempting to steal the explosives and Claire comes over to help him. In the palace, Gillian is massaging Frankie’s feet.

Lacey and Claire have been invited to dine with the Dictator. Claire and Lacey’s secret mission is to tap his phone so that housemates can hear Frankie’s conversations with Big Brother. Rylan has been freed from jail and is now in the diary room removing the stolen explosives that are hidden under his jacket. Big Brother tells him that a food parcel will be dropped into the garden for housemates to enjoy. “Viva la revolution,” Rylan beams. He leaves the diary room and informs housemates of the imminent treat which must be kept secret from guards Razor and Ryan as well as Frankie.

The Dictator and his guards are playing games in the golden palace. Rylan is talking to Spencer and Heidi about the food parcel, “We’ve got to eat in the Igloo,” he adds. The shutters rise and housemates notice a wooden crate and rush outside. The housemates get more excited as they realise that the crate contains Indian take-away for them to enjoy. “This is the best night of my life,” Rylan adds.

The Dictator has gathered housemates on the sofa. He announces: “As a token of gratitude, I will reward you with the gift of music, a silent disco.” Housemates don the headphone provided and The Dictator thinks that they are dancing along to macho Man by the Village People. The Dictator returns to the golden palace and receives a call from Big Brother. He is unaware that in the living area, housemates can now hear his seemingly private conversation

Big Brother asks Frankie who his least favourite housemates are. Frankie hesitates before naming Heidi and Spencer. He mentions that he feels wary of the couple. “They hate me anyway, ever since I sent them down in the basement,” he adds. Frankie says that he is a “big fan” of Rylan. He adds that Heidi and Spencer “frightened me when it kicked off during the argument with Rylan.” In the living area, Heidi and Spencer looks straight faced as they listen into Frankie call while pretending to dance.

Frankie is in his palace. Heidi and Spencer are in the bedroom. They mention that they will definitely vote for Frankie. “I want him to leave so bad (sic), he’s such a little a**ehole,” Spencer adds and mentions that Frankie is only in the house, “cos he got rolled for drugs.” He tells Heidi, “He’s just mad because his wife doesn’t look like you. If he felt uncomfortable before, I’m gonna turn it up,” he warns.

Most of the housemates are asleep. Heidi and Spencer are in the diary room, plotting their rebellion against “all dictators.” Spencer adds: “We’re from America, we fight dictators for fun.” He mentions that Big Brother has been on a power trip and that Frankie is “showing his true colours.” They mention that they will enjoy ripping down all the posters and knocking down Frankie’s statue during the next part of the task. “We’re gonna do it the American way, no more Big Brother,” Spencer adds as Heidi declares: “We’re American, we’re not slaves to anyone.”